Understanding the Enemy: Verso Student Reading on the Far Right

Books on authoritarianism, fascism and the far-right from across 50 years of publishing.

There has been an unmistakable rise in far right politics across the world, with right wing movements gaining a political hold across the global north and south. Are far right movements an inescapable feature of capitalism, its spread and its decay? Is there some way of studying history to understand the political and social conjunctions that generate an opening for the far right to gain power?

Is it possible to deal with reactionary attitudes from a liberal perspective, on the level of the individual, or is the only solution a radical politics that eradicates the material conditions for reactionary mentalities in late capitalism? The appeal of far right movements has long been studied on the left from an interdisciplinary approach, blending political economy, cultural critique, psychology, ideology, and social theory. These readings bring together reflections on past fascist movements as well the rise of the new right. Is it correct to call the new reactionary movements “fascist,” or is there some better way to theorize them without blurring historical specificity?

Prophets of Deceit analyzes the “psychological techniques of the agitator,” the underlying rhetorical strategies employed by far right ideologues to redirect underlying dissent generated by capitalism into reactionary ends.

The Authoritarian Personality is one of the most important empirical studies generated by the Frankfurt School. The study was tasked with examining whether such a thing as a “deep character structure of the potential fascist” could be analyzed, regardless of “manifest statements” or conscious political identity.

The story of the remarkable resurgence of right-wing extremists in the United States.

A classic of twentieth-century thought, Minima Moralia is Adorno's literary and philosophical masterpiece

A sharp challenge to received wisdoms about the political underpinnings of fascism in Europe. Drawing on a Gramscian theoretical perspective and developing a systematic comparative approach, The Civic Foundations of Fascism in Europe: Italy, Spain and Romania 1870–1945 challenges the received Tocquevillian consensus on authoritarianism by arguing that fascist regimes, just like mass democracies, depended on well-organised, rather than weak and atomised, civil societies.

American history told from the vantage of immigration politics. For decades, Republicans and Democrats alike have employed xenophobic ideas and policies, declaring time and again that “illegal immigration” is a threat to the nation’s security, wellbeing, and future.

One of the most profound philosophical critiques of the roots of authoritarianism to emerge from the post-war years. A must-read for any student of the Frankfurt School and Western Marxism.

One of the most fascinating documents of late first-gen Frankfurt School, Towards a New Manifesto records Adorno and Horkheimer speculating on central themes of their work since the Dialectic of Enlightenment—theory and practice, social psychology, labour and leisure, domination and freedom—in a political register found nowhere else in their writing. A thrilling example of philosophy in action and a compelling map of a possible passage to a new world.

Fascism and Dictatorship is the classic, perhaps unrivalled Marxist study of German and Italian fascism.

In The Notion of Authority, written in the 1940s in Nazi-occupied France, Alexandre Kojève uncovers the conceptual premises of four primary models of authority, examining the practical application of their derivative variations from the Enlightenment to Vichy France. This foundational text, translated here into English for the first time, is the missing piece in any discussion of sovereignty and political authority, worthy of a place alongside the work of Weber, Arendt, Schmitt, Agamben or Dumézil.

In this short book, Peter Mair outlines perhaps the most profound political analysis of the contemporary political contradictions of neoliberalism. Ruling the Void offers an authoritative and chilling assessment of the prospects for popular political representation today, not only in the varied democracies of Europe but throughout the developed world.

Should we continue to use the concept of "fascism" to describe authoritarian movements today? Enzo Traverso suggests the concept of post-fascism—a hybrid phenomenon, neither the reproduction of old fascism nor something completely different—to define a set of heterogeneous and transitional movements, suspended between an accomplished past still haunting our memories and an unknown future.

Populism has become a political buzzword to describe everything from Corbyn to Sanders to Brexit and Donald Trump. But what actually defines populism? Marco Revelli answers the question by getting to grips with the historical dynamics of so-called populist movements.

Utilizing multiple sources, Enzo Traverso depicts the dialectic of the early 20th century era of wars, revolutions and genocides. Rejecting commonplace notions of “totalitarian evil,” he rediscovers the feelings and reinterprets the ideas of an age of intellectual and political commitment when Europe shaped world history with its own collapse.

As America and its allies use their military might in the misguided attempt to export a desiccated version democracy, and reactionary strands in mainstream political opinion abandon civil liberties, Rancière argues that true democracy—government by all—is held in profound contempt by the new ruling class. In a compelling and timely analysis, Hatred of Democracy rethinks the subversive power of the democratic ideal. 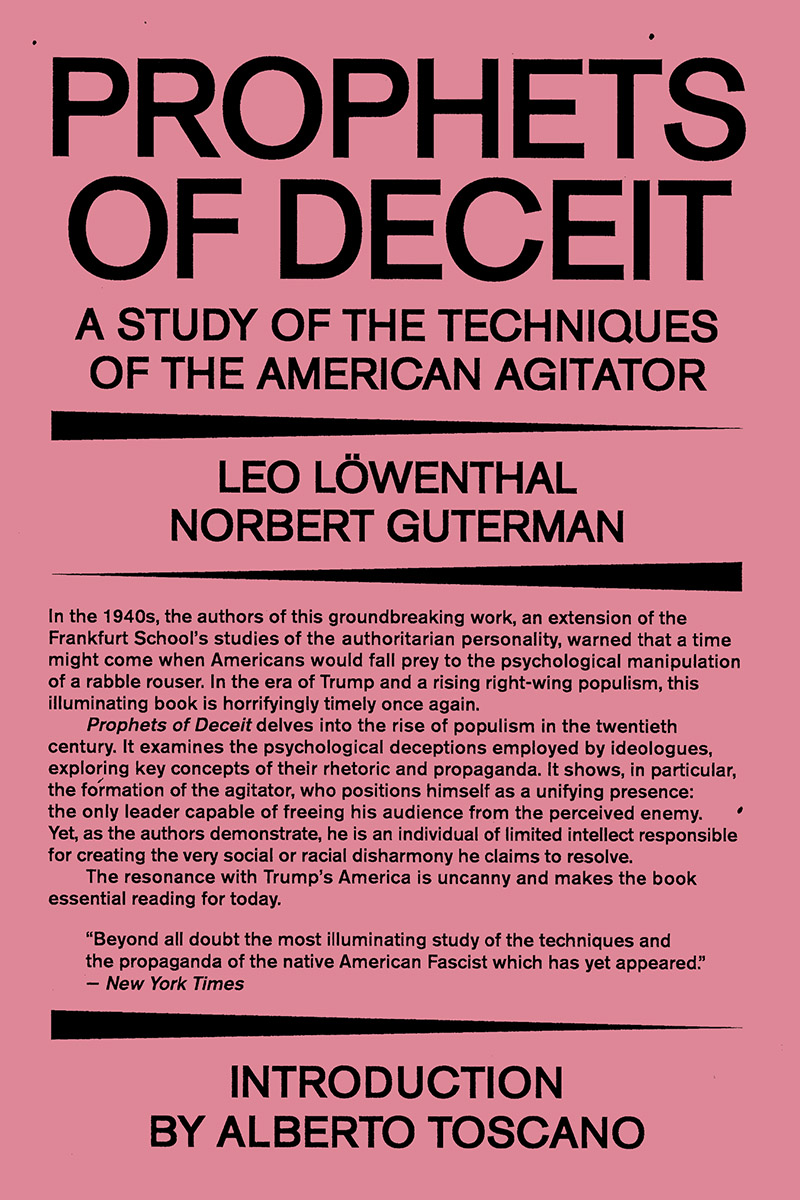 Prophets of Deceit
by Norbert Guterman and Leo Löwenthal

Towards a New Manifesto
by Theodor Adorno and Max Horkheimer

Fascism and Dictatorship
by Nicos Poulantzas

The Notion of Authority
by Alexandre Kojève

The New Faces of Fascism
by Enzo Traverso 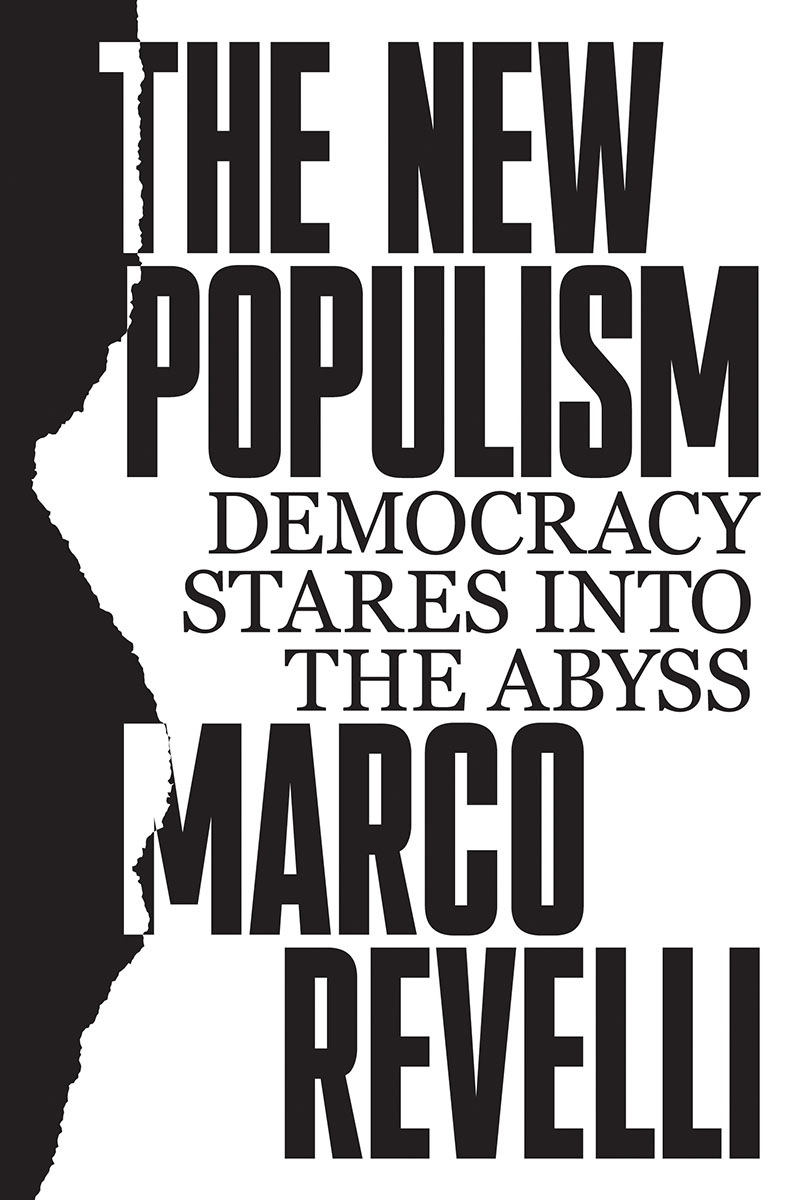 The New Populism
by Marco Revelli