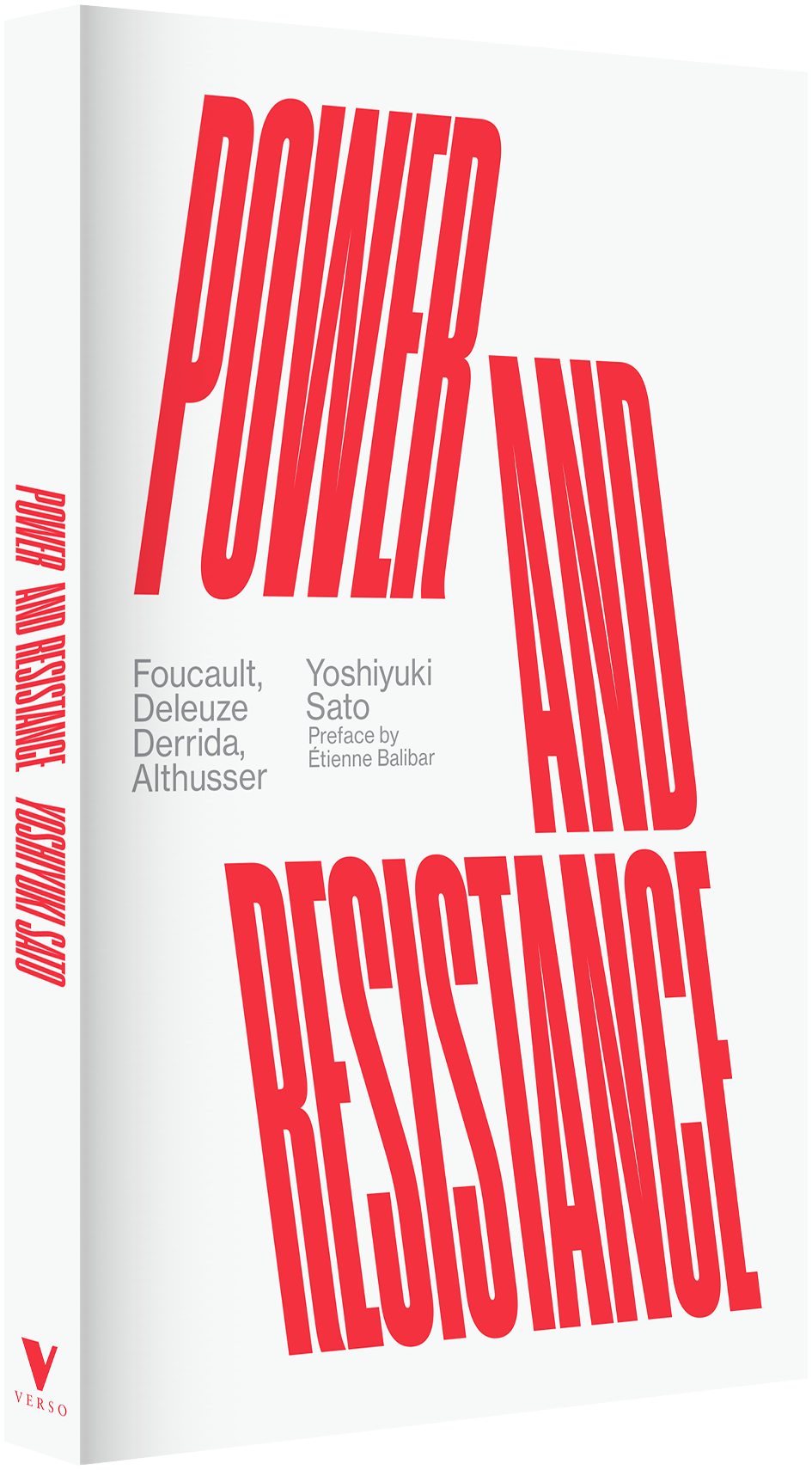 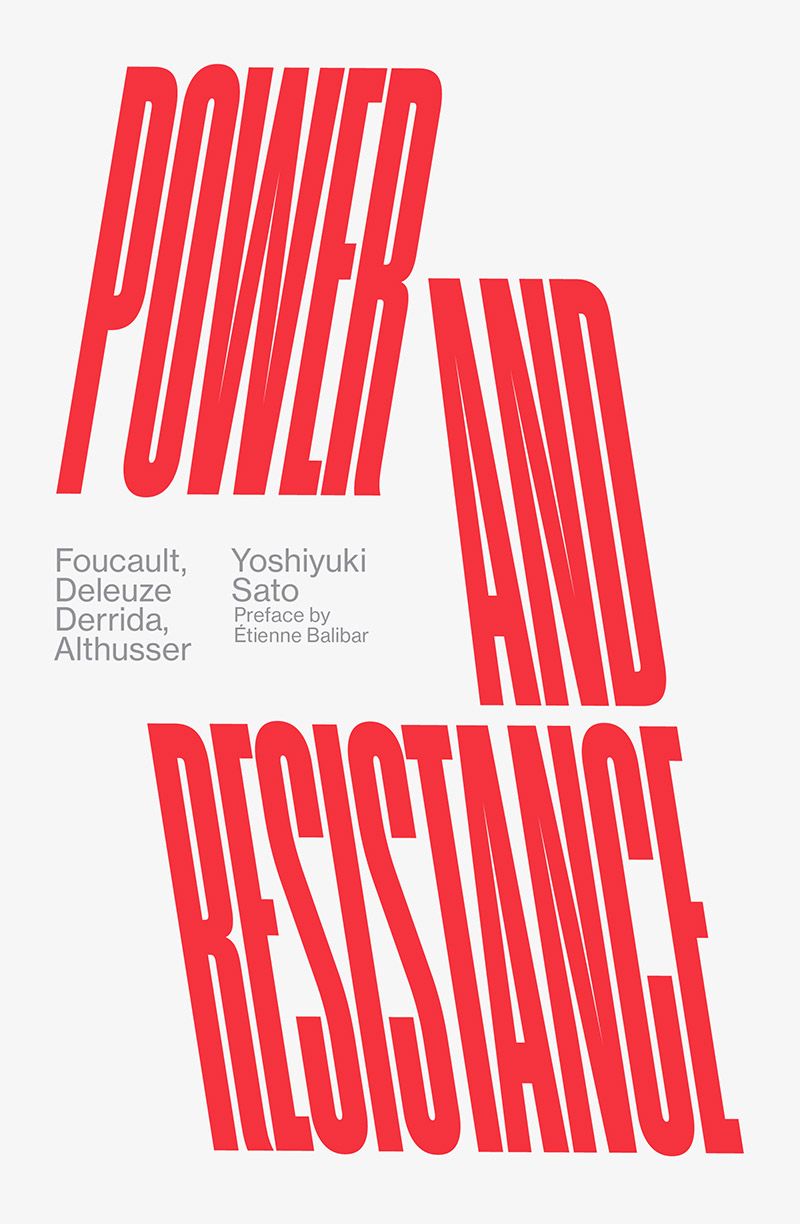 A provocative reinterpretation of “(post-)structuralist” theory of power, depending on and criticising psychoanalytic theory

The "structuralist" theories of power show that the subject is produced and reproduced by the investment of power: but how then can we think of the subject's resistance to power? Based on this fundamental question, Power and Resistance interprets critically the (post-)structuralist theory of power and resistance, i.e., the theories of Foucault, Deleuze/Guattari, Derrida and Althusser. It analyses also the mechanism of power and the strategies of resistance in the era of neoliberalism. This meticulous analysis that completely renewed the theory of power is already published in French, Japanese, and Korean with success.

“Sato has taken on the impressive task of isolating, with analytical precision, the sources of resistance within generally conceived structuralist theory. His thesis offers a masterful and erudite reading of Foucault, Freud, Deleuze, Lacan, Derrida, and Althusser, among others. His explanation of a sample of texts by these authors is quite illuminating. Indeed, Sato succeeds in showing that the theory of the subject, if understood in its relation to a constitutive death drive, carries with it the possibility of resisting the cruelty of the law and providing the basis for a general theory of resistance. He further shows that structuralism should not be seen as a ‘static’ description of social and linguistic structures, and that what is needed is rather a diachronic view of structures that takes into account—without domesticating—the forces of contingency. Starting from the death drive and the contingency of structures, and through an argument that is as erudite as it is enlightening, Sato constructs an explanation of resistance in structuralism (but also for it and its future), thus reviving a debate that has unfortunately been bogged down for some time in clichés and misconceptions.”

“Conceptually dense and philosophically masterful, Yoshiyuki Sato's Power and Resistance ranges widely across the work of Foucault, Deleuze, Derrida, and Althusser (with Lacan as the 'silent partner' of the text), in pursuit of how the structuralist (non)dialectic of power and resistance comes to be underpinned by this aporetic subject that must be both the product of the social structure, yet also that which furnishes the force of resistance to its reproduction, demonstrating precisely that the "thought of the subject" is nothing other than a theory of how the 'outside' relates to the interiority of the structure. Refusing the now-widespread reception of post-68 French thought as having 'done away with' the category of the subject, Sato shows ably and with real mastery of the literature, why we must instead consider these thinkers to be precisely 'theoreticians of the subject'. In our current conceptual conjuncture, this important book has reemerged in English after its French and Japanese editions to provide the thought of a transformation beyond that dialectic of subjection and resistance which merely reinforces the social closure, giving proof positive for the politicality and living force of this set of figures so crucial to twentieth century thought.”

“Sato's book brilliantly testifies to the acuteness, depth and originality of the readings of French philosophy of the twentieth century which are carried out today by young foreign philosophers, especially Japanese. Through them is brought a new freshness, a re-perspective and re-questioning, and therefore these are the conditions for a relaunch of previously passionate debates which reaches us at the opportune moment. As a participant, along with some others, in these debates in which I - quite wrongly - believed to have travelled all avenues, it is with great pleasure that I welcome this critical return and this relaunch.”

“With unusual clarity, Yoshiyuki Sato reconstructs the relations of appropriation, exclusion and interaction that allow us to speak of a structuralist moment defined by the conjunction of Foucault, Deleuze, Derrida and Althusser. He explores the encounters that took place around the notion of power and, with it, the forms of its internalization: the subject, subjection and subjectivity. Sato shows us the multiple dialogues that took place between these very different thinkers, not in spite of their divergent lexicons, but because of them, and how the questions surrounding power led to an examination of the concept of resistance and its functions in fields as diverse as physics, biology, psychoanalysis and politics. Sato's rigor, his refusal to blur the distinctions between the philosophers in question and his insistence on staying close to their actual texts, sets this study apart from the common interpretations of structuralism and the structuralist moment. It provides a new foundation for the study of French philosophy of the sixties and seventies.”

A Guide to our October Titles

Hot off the press - here are our October releases!