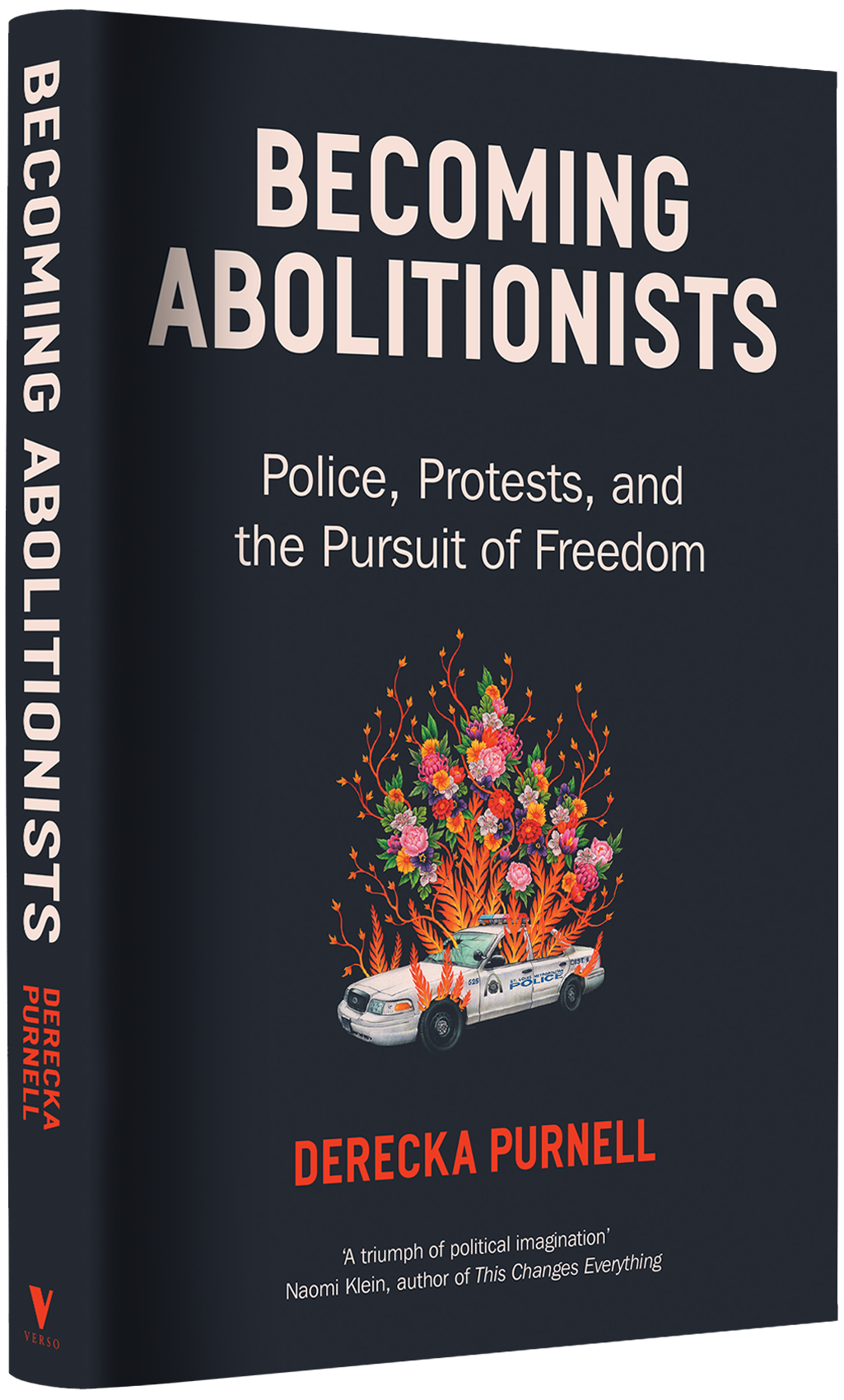 The case for abolishing the police.

* PLEASE NOTE: THIS BOOK IS NOT PUBLISHED BY VERSO IN NORTH AMERICA

In the aftermath of George Floyd’s murder and the ensuing uprising, police abolition became a central demand for the black lives matter movement.

Derecka Purnell’s story starts in St. Louis, where calling 911 was often the solitary and dangerous resort for any number of challenges in a deprived neighbourhood. Her political awakening follows the devastation of Hurricane Katrina, the murder of Trayvon Martin and the protests and riots in her hometown, Ferguson, after the death of Michael Brown. Meeting organizers from all over the world, including Europe and South Africa, she is pushed to realize that the solution required is not better policing but the end of the policing itself.

Purnell’s life history and arguments make a powerful, passionate case for a society in which there is no place for state violence and racial repression. She confronts the history of policing as a means to capture runaway slaves and uphold white supremacy, a practice persisting today in the policing and murder of Black people, poor people, and disabled people on modern city streets. She argues that the worst of policing is the purpose of policing and that we need new systems to address the root causes of violence.

Becoming Abolitionists will inspire readers to create new communities where safety, equality, and real justice for all can thrive.

“With deep insight and moral clarity, Purnell shares her compelling journey of political education and personal transformation, inviting us not only to imagine a world without police, but to muster the courage to fight for the more just world we know is possible. Becoming Abolitionists is essential reading for our times.”

“One of the most perceptive and passionate thinkers of any generation, Derecka Purnell, has written a genu-inely revolutionary text for our times—one that resists easy answers or solutions and never shies from the hard questions. She proves that abolition is not an event or a utopian dreamstate, but rather a journey of assembly struggling to create new worlds of freedom as we fight the unfree world we inhabit. Beautifully written, passionate, honest, Becoming Abolitionists charts a journey we all must take if we plan to survive, let alone live together.”

“A vital resource for anyone committed to the struggle for social justice, written by one of the sharpest and most inspiring voices to emerge in a generation. Taking readers on a journey from her childhood in St. Louis to the protests in Ferguson, the halls of Harvard, the streets of So-weto and beyond, Derecka Purnell’s heart-rendering analysis gives us the tools to envision a new society with endless possibilities. Even more, Purnell’s extraordinary blend of personal memoir, history, and critical theory provides a roadmap to build a safer and more just world. Like the Autobiography of Angela Davis, Becoming Abolitionists is sure to remain an essential text for decades to come.”

– Elizabeth Hinton, author of America on Fire and From the War on Poverty to the War on Crime

“Purnell is undoubtedly one of the most important writers and activists of our generation, offering us a vivid, moving and compelling book for anyone interested in one of the most urgent issues of our times. Purnell weaves experiences of racism and resistance to articulate a blis-tering critique of racial capitalism, state power and imperialism, taking readers on a journey towards the radical alternatives to police and prisons which have shaped Black political movements in the 21st century.”

“Derecka’s book provides a front row seat to how a generation of young people have been radicalized by a series of contradictions living with-in the heart of global empire: the United States. She explains, with powerful stories and brilliant analysis, how she has committed herself to abolition in the context of ongoing collective study and struggle. The abolition she discusses is anti-capitalist and anti-colonialist, commit-ted to racial, economic, and gender justice. A call to not simply tear down prisons and police, but to build a society where our collective needs prevail over profit and punishment. This book is more than a front row seat, it is an invitation to join the most important movement of our time.”

“Derecka Purnell has one of the most exciting minds of a generation, and Becoming Abolitionists gives us all an excuse to praise her. This book is an explosion of deep intellect matched with great love, showing a journey toward radical politics that embraces the messiness. Derecka does not expect we all wake up and become abolitionists immediately--it didn’t happen that way for her--but by showing both her intellectual and emotional path toward abolitionist thinking, she provides a roadmap that is also compassionate to those moving in a slow-er lane. But with an argument rooted in history, criticism guided by deep care, and writing that pulses with urgency, Becoming Abolition-ists will convince you that is exactly what we all need to do before you even put the book down.”

“At once specific and sweeping, practical and visionary, Becoming Abolitionists is a triumph of political imagination and a tremendous gift to all movements struggling towards liberation. Do not miss its brilliance!”

– Naomi Klein, author of This Changes Everything

“A beautiful invitation to understand what is possible if we commit to unlearning our dependence on police and address the underlying in-justices that cause harm in our communities. This is the book we have been waiting for and knew we needed to advance abolitionist efforts. Purnell is the abolitionist writer of her generation.”

“Part memoir & part manifesto for our times. Beautifully written, the book takes the reader on a personal journey from the Midwest to South Africa with a pit stop in New England. As a member of the ‘Trayvon Generation,’ Derecka offers us invaluable insights into how young activ-ists are navigating and challenging current injustices. If you’ve been curious about the modern abolitionist movement, this book is a must read!”

– Mariame Kaba, bestselling author of We Do This Til We Free Us

“Becoming Abolitionists is a wise and passionate argument for the urgency of first responders without guns. Purnell takes on the hardest questions with analytical rigor and common sense. This is abolition for the people.”

“Becoming Abolitionists brilliantly lays out the connections between policing and other forms of oppression and shows why even well-meaning ‘reforms’ won’t get us where we need to go. This profound, urgent, beautiful, and necessary book is an invitation to imagine and organize for a less violent and more liberatory world. Everyone should read it.”

– Astra Taylor, author of Democracy May Not Exist but We’ll Miss It When It’s Gone

“An extraordinary, wonderful, insightful, and immensely generative book that makes the case for abolitionist thinking, amplifying the self-activity of the masses already in motion, and at the same time providing a thoroughly absorbing and captivating description of the author’s own journey. Rather than encouraging each of us to brand ourselves as radical, Purnell points us toward the collaborative acts of co-creation and accompaniment that can make revolutionary change possible. She incorporates decoloniality, feminism, Indigeneity, environmental justice, and disability activism organically into her critiques and solutions. One of the most exciting, inspiring, and enlightening books I have read in a long time.”

– George Lipsitz, author of The Possessive Investment in Whiteness

“[Purnell] draws convincing parallels between the past and the present to demonstrate that today’s policing systems are vestiges of this oppressive framework … even if you disagree with her, you are compelled to listen.”

“Argues convincingly that police departments and prisons are irredeemably implicated in racist ideologies and the perpetuation of violence despite long-standing efforts at reform … An informed, provocative, astute consideration of salvific alternatives to contemporary policing and imprisonment.”