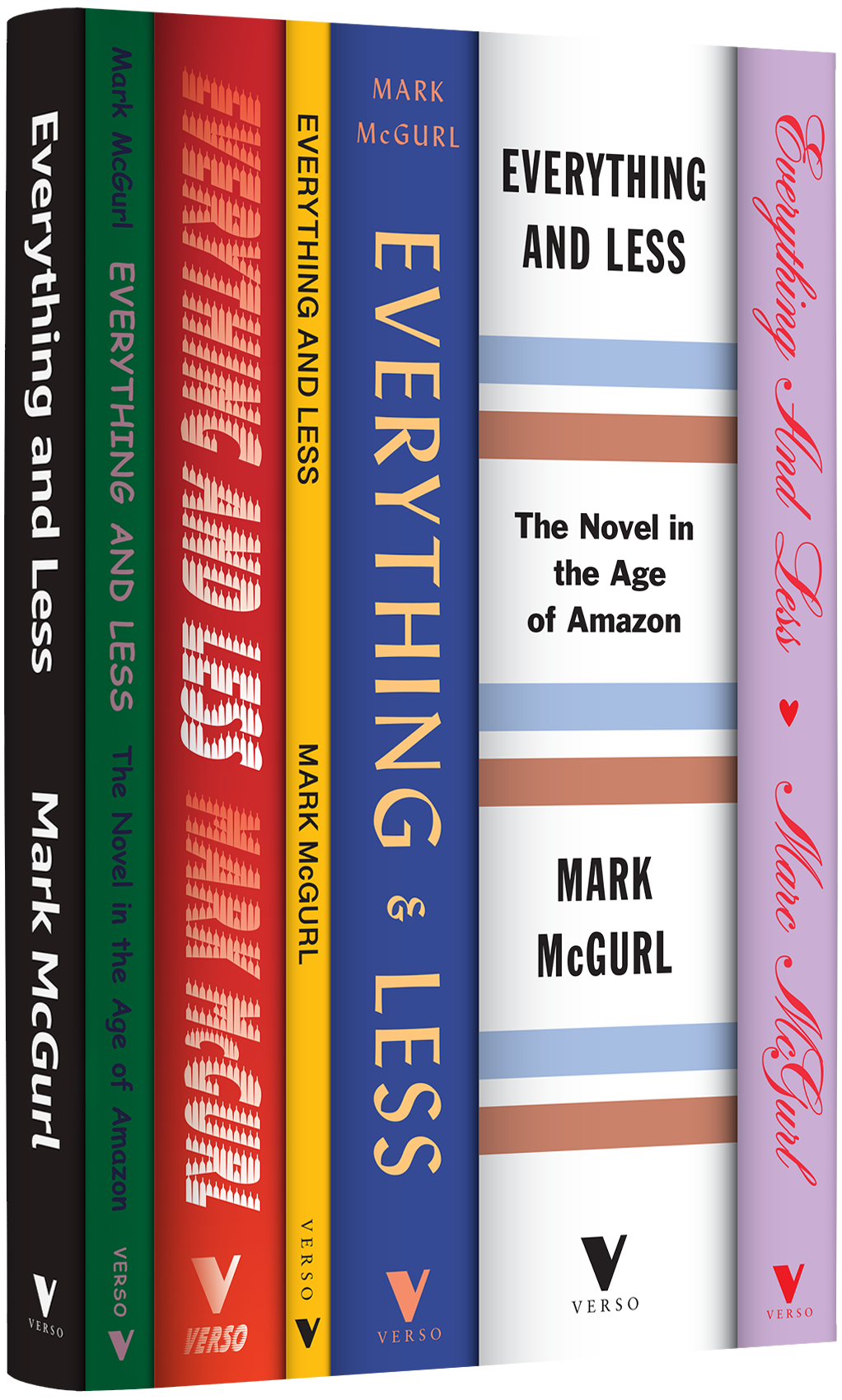 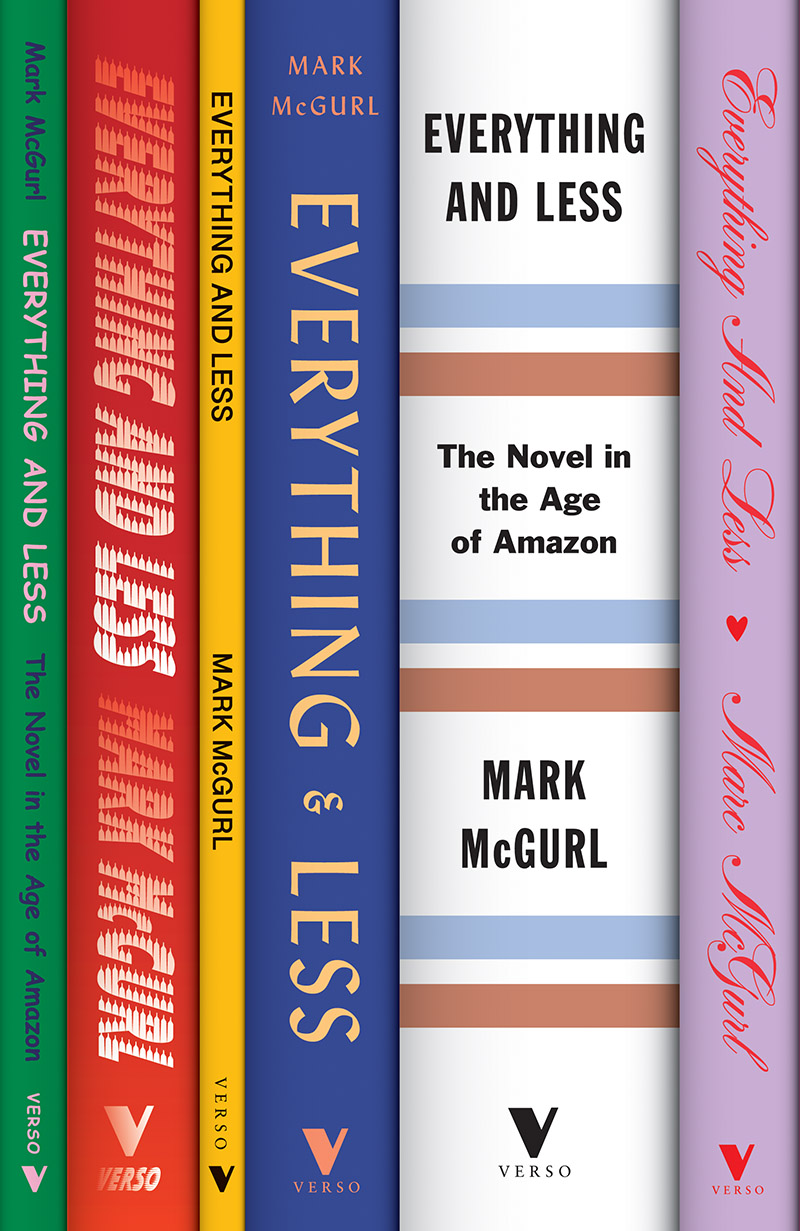 What Has Happened to Fiction in the Age of Platform Capitalism?

Since it was first launched in 1994, Amazon has changed the world of literature. The “Everything Store” has not just transformed how we buy books; it has affected what we buy, and even what we read. In Everything and Less, acclaimed critic Mark McGurl explores this new world where writing is no longer categorized as high or lowbrow, literature or popular fiction.

Charting a course spanning from Henry James to E. L. James, McGurl shows that contemporary writing has less to do with writing per se than with the manner of its distribution. This consumerist logic—if you like this, you might also like ...—has reorganized the  fiction universe so that literary prize-winners sit alongside fantasy, romance, fan fiction, and the infinite list of hybrid genres and self-published works.

This is an innovation to be cautiously celebrated. Amazon’s platform is not just a retail juggernaut but an aesthetic experiment driven by an unseen algorithm rivaling in the depths of its effects any major cultural shift in history. Here all fiction is genre fiction, and the niches range from the categories of crime and science fiction to the more refined interests of Adult Baby Diaper Lover erotica.

Everything and Less is a hilarious and insightful map of both the commanding heights and sordid depths of fiction, past and present, that opens up an arresting conversation about why it is we read and write fiction in the first place.

“Fierce … Everything and Less enlists literary sources to explain the place of culture in a neoliberal economy.”

“[McGurl] is attuned to America’s signature queasiness about class, pleasure, and mass culture that constellates around reading and education. In Everything and Less, this takes the form of wild anthropological delight as he explores genres, and micro-genres, long dismissed by most mainstream scholarship and criticism.”

“McGurl is above all a literary sociologist, and a brilliant one at that: it seems unlikely that any recent or forthcoming book can rival Everything and Less as a survey, at once brashly comprehensive and nimbly speculative, of the contemporary literary world.”

“As Mark McGurl suggests in this deep dive into the ubiquitous reach of ‘the world’s biggest bookstore,’ in the age of Amazon, ‘every novel is a genre novel.’”

“Provocative … [McGurl] raises significant questions about the state of publishing.”

“To survey the vast expanse of Amazon’s literary domain, McGurl makes frequent excursions into popular genres rarely considered among academics and critics … prompting a reassessment of the literary center and the literary fringe.”

“[Mark McGurl is] the most exhaustive scholar to track US fiction’s myriad paths from Henry James to Chuck Tingle … a man who has read a lot, and, in the end, very earnestly.”

“Intriguing … McGurl’s object of study is not just the literary Age of Amazon but the place of the novel within it.”

“Provocative … in lucid and well-argued prose, McGurl goes spelunking through the many genres shaped by Amazon’s consumerist logic.”

“In Everything and Less, accomplished literary critic Mark McGurl makes the case that the online superstore has also changed the way that we read.”

“The point here—and I think it’s the most profound in McGurl’s very entertaining book—is that Amazon is refashioning the novel as an object.”

“Intriguing and entertaining … Everything and Less is a good starting point for a re-consideration of literary production and reading in our times.”

“Engrossing … McGurl argues that Amazon’s outsize role in serving readers’ needs has had a profound impact, not just on well-documented matters of retailing and warehousing, but on what we read, and to an extent, the content of the books themselves.”

– Mark Athitakis, On the Seawall

“Probing … Everything and Less will speak to those who submerge themselves—whether as writers or readers, entrepreneurs or customers—into the [Kindle Direct Publishing] landscape, while offering much to think about … for those who cherish traditional publishing and still place some value in the role that gatekeepers have long played in the book industry.”

“Everything and Less offers a sprawling account of the contemporary literary field, now being remade according to the ethos of the megacorporation. McGurl’s theory of the novel is a romp, keyed to his compelling account of the genre system as it is being driven by Amazon and refined by Kindle Direct Publishing.”

“Consumers might find in McGurl’s book a warning to stay as far away as possible and seek out better forms of discovery than Amazon’s website, like visiting an indie bookstore, asking a friend, or reading a magazine–looking for anything but what rises to the top of the feed.”

“McGurl is above all a literary sociologist, and a brilliant one at that: it seems unlikely that any recent or forthcoming book can rival Everything and Less as a survey, at once brashly comprehensive and nimbly speculative, of the contemporary literary world.”

Our recent publication of Marx’s Literary Style has us reflecting on some of the other great works of Literary Theory that we’ve published over the years. It inspired us to make this reading list, loaded with key texts from writers like Fredric James, Valery Podoroga, Oscar Wilde, and others that will pair nicely with our publication of Ludovico Silva’s wonderful analysis.