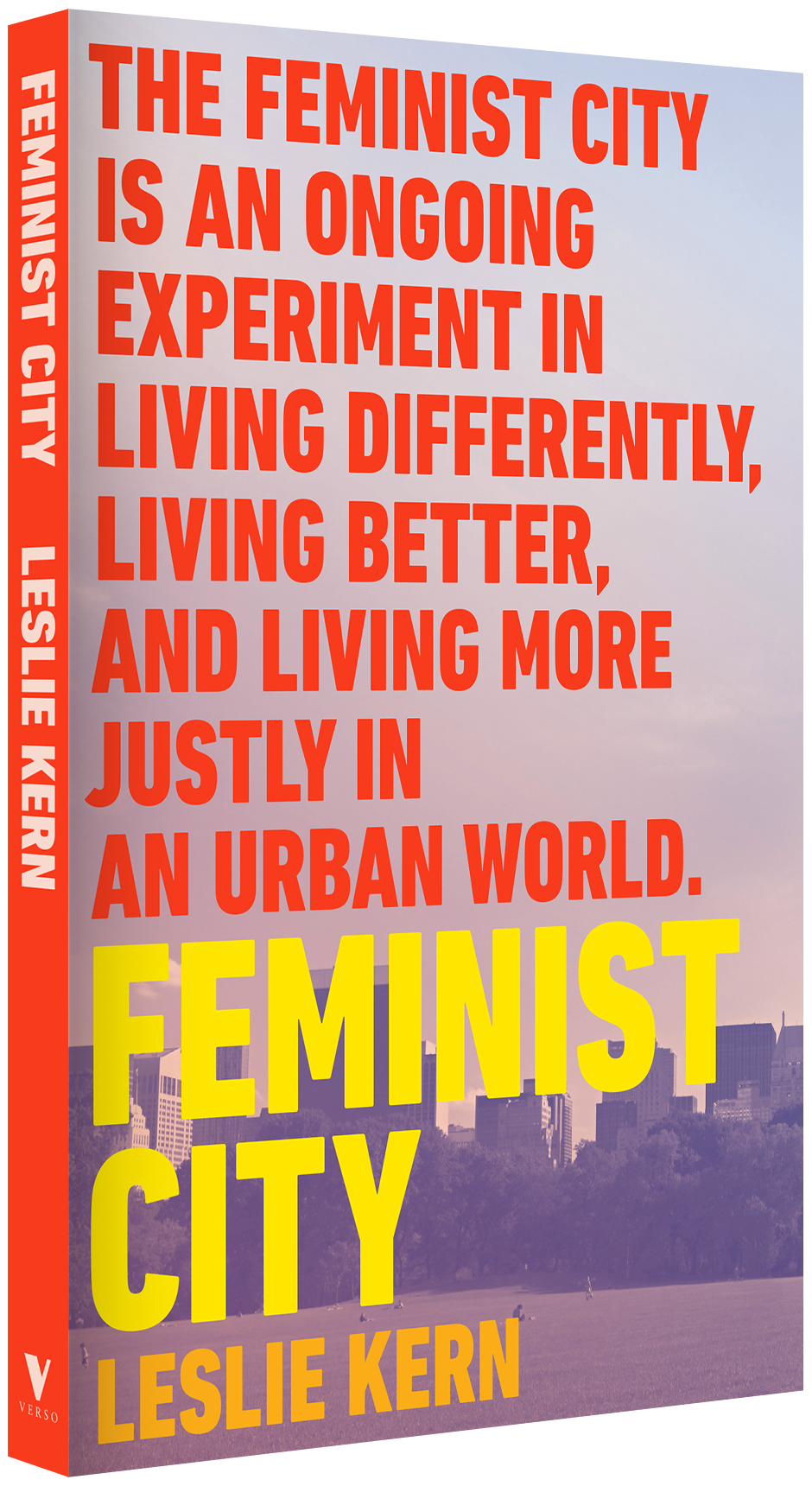 Feminist City is an ongoing experiment in living differently, living better, and living more justly in an urban world.

We live in the city of men. Our public spaces are not designed for female bodies. There is little consideration for women as mothers, workers or carers. The urban streets often are a place of threats rather than community. Gentrification has made the everyday lives of women even more difficult. What would a metropolis for working women look like? A city of friendships beyond Sex and the City. A transit system that accommodates mothers with strollers on the school run. A public space with enough toilets. A place where women can walk without harassment.

In Feminist City, through history, personal experience and popular culture Leslie Kern exposes what is hidden in plain sight: the social inequalities built into our cities, homes, and neighborhoods. Kern offers an alternative vision of the feminist city. Taking on fear, motherhood, friendship, activism, and the joys and perils of being alone, Kern maps the city from new vantage points, laying out an intersectional feminist approach to urban histories and proposes that the city is perhaps also our best hope for shaping a new urban future. It is time to dismantle what we take for granted about cities and to ask how we can build more just, sustainable, and women-friendly cities together.

Due to regional restrictions, this book cannot be delivered to Canadian addresses.

“Cities aren’t built to accommodate female bodies, female needs, female desires. In this rich, engaging book the feminist geographer Leslie Kern envisions how we might transform the ‘city of men’ into a city for everyone. Let’s all move there immediately.”

“Visionary, intelligent, and humane, this book offers intersectional insights into the gendered nature of the modern city to promote ‘living more justly in an urban world’ … A timely, thought-provoking study.”

“[An] insightful scholarly work … This provocative analysis will resonate with theoretically minded feminists.”

“I was hooked by this deep dive into how women’s freedom is curtailed by the design and culture of man-made cities—and how we can reclaim space.”

“This book totally opened my eyes! Feminist City is an incredibly incisive look at cities and urban design through the lens of gender, while also inspecting how acts of claiming urban space affect other marginalized groups. Combining academic and lived experience, Leslie Kern's intersectional approach clearly lays out just how cities are failing and what it might mean to imagine a more just urban life. Feminist City made me see my own experiences in a whole new light, and Kern makes the field of feminist geography completely accessible and exciting to the average city slicker. Anyone who considers themselves a feminist or activist should read this book!”

“Approachable and based in thorough research ... In eye-opening detail, [Feminist City] argues that the privatization of security and heightened police presences endanger women of certain demographic groups, while marketers, who present condo living as the safest way to exist in a city, ironically turn women into accomplices in gentrification, forcing low-income women out of safer areas and into environments that are more dangerous.”

“An optimistic, pragmatic book, which points to already extant solutions and looks forward to a more just, joyous urban future.”

“In Feminist City, Kern imagines a world where public spaces are designed with women and equity in mind.”

“Feminist City is brilliant because of the ways it lays out, quite clearly, the fact that cities are designed to discriminate in both overt and hidden ways and that it’s possible to imagine something new—something that is more inclusive of different bodies and experiences.”

“[Feminist City is] a small but provocative book. It is both an introduction to feminist geography and to modern feminism, with its multiple meanings and numerous contradictions … In a world where the male gaze is so often the only gaze considered, so much so [that] most people don’t even think of it as being gendered in any way, Feminist City is revelatory.”

“Kern resists drawing a blueprint for a new master-planned feminist city. Instead, she believes we ought to take a closer look at how cities perpetuate inequality from the perspective of race, gender, ability, and class.”

“[Feminist City] examines the city’s paradoxical ability to oppress and emancipate—how an environment teeming with gendered inconvenience, racial discrimination, and sexual violence can also be a locus of queer independence, community care, and emancipatory feminist world-making … Heavily researched but accessibly written, the book is a dynamic mix of high and low, facts and feelings, research and reality.”

“Kern delves into the interlocking inequalities and systems of oppression that take concrete shape in cities, using an intersectional feminist approach to explore the gendered aspects of urban space … an enjoyable and accessible book that not only contributes to urban feminist geography, but to urban planning and policy more broadly.”

“An intersectional analysis of our urban environments through a combination of personal narrative, theory, and pop culture analysis.”

“Looking through the lens of geography, pop culture and public and personal history, the book exposes how female bodies are ostracised in urban spaces.”

“Charting the physical aspects of the city that work against women, from inefficient public transport to a lack of supportive care networks for working mothers, Kern argues that there are ways to transform the city that would advance the liberation of women and marginalized people … Kern’s analysis seems especially timely as we debate the role of police in our society and how we can better protect marginalized people.”

“Feminist City balances descriptions of our environment with the internal conversations or anxieties we feel as we wait for the bus, rush to pick up our child before daycare closes, and navigate space that’s designed to keep us inside.”

“There should be more books like this … Feminist City is wide-ranging and sophisticated, brief and engaging.”

“[Kern’s] message is that thoughtful planners can and, eventually will, arrive at the feminist city as long as women’s voices get the attention they deserve.”

– Apoorva Tadepalli, In These Times

“[Kern] introduces readers to a number of different ways the city is at once emancipatory and endangering. She deploys an intersectional lens to explore such themes as mobility, protest, adolescence, and friendship, weaving together an impressive array of sources from academic writings and popular culture (Doreen Massey appears alongside Two Dope Queens).”

“Feminist City presents a comprehensive analysis of how people of color are the folks that make our cities work, and yet, they are not the folks our cities were designed for.”

“Reminds us that our cities are moulded by male fantasies and designed to serve gender-based structures.”

“A good introduction to reading the city from a feminist perspective.”

“Feminist City is a call for gender equity in planning (and for intersectionality), and it’s one that planners of all genders should heed.”

“Kern works to identify what a feminist city actually is as she pushes readers to thinkbigger, to think more radically, to think in terms of proactive world- and community-building ratherthan reactionary, incrementalist, or singularly policy-based world-adjusting … Feminist City provides a fundamental critique of contemporary society through a feminist and urbanist lens. Itshould be considered a significant contribution to both fields of study.”

“An excellent contribution … Leslie Kern’s clear laying out of feminist urban theory and empirical work generates both a personal and critical understanding of the city.”

“[Feminist City] encourages people to look around their community and ask: Who are these spaces meant for? Who feels included and safe and welcome, and who might feel excluded, unsafe or even pushed out of the city?”

“Importantly, Kern shows how sexism in cities is also inextricably linked to other systems of privilege and oppression, particularly racism, classism, homophobia and ableism … a noteworthy book for our times”

“Essential … Kern an excellent example of a writer who wants to amplify marginalised voices … Feminist City urges women to take up space in their environments and not to be afraid of the unknown.”