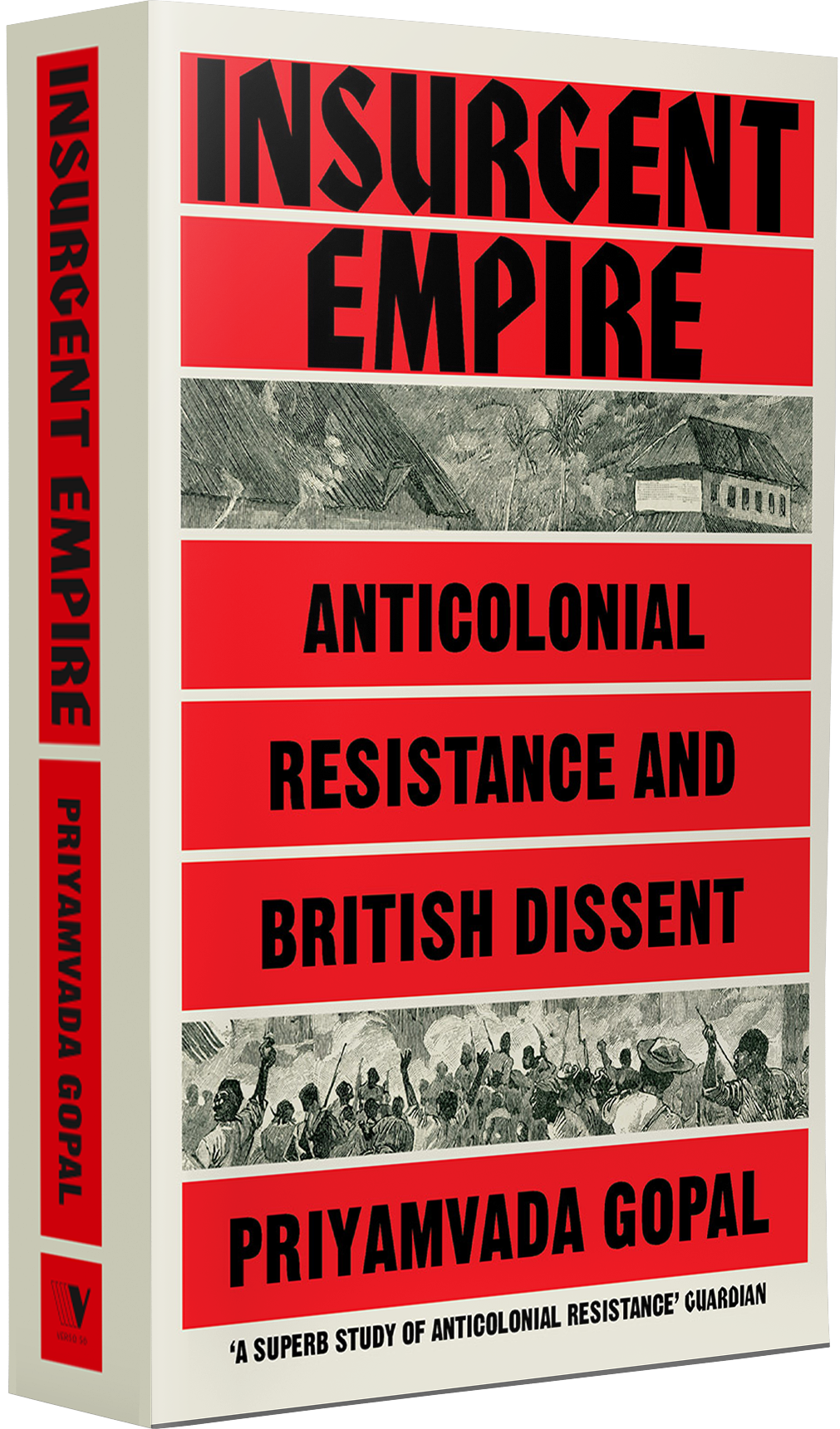 Priyamvada Gopal examines a century of dissent on the question of empire and shows how British critics of empire were influenced by rebellions and resistance in the colonies, from the West Indies and East Africa to Egypt and India. In addition, a pivotal role in fomenting resistance was played by anticolonial campaigners based in London, right at the heart of empire.

Much has been written on how colonized peoples took up British and European ideas and turned them against empire when making claims to freedom and self-determination. Insurgent Empire sets the record straight in demonstrating that these people were much more than victims of imperialism or, subsequently, the passive beneficiaries of an enlightened British conscience—they were insurgents whose legacies shaped and benefited the nation that once oppressed them.

“Priyamvada Gopal has calmly and authoritatively produced this impressive study of resistance against Empire, in the face of the kind of constant hostility that only serves to reminds us why her work is so urgent in the first place. We all owe her a debt.”

“Priyamvada Gopal is an astonishing writer and thinker, one who is fearless in how she uses history to explain where we are now. Her work is essential to showing how empire and colonialism pervades every nook and cranny of the British establishment today and why we should all continue to speak truth to power, like she does every damn day.”

“A superb study of anticolonial resistance”

“An audacious, expansive and rigorously researched counter-history of empire. Rather than treat colonized humanity as victims or reactionaries, Gopal’s narrative discloses a cast of resisters that shaped the idea of freedom across Britain and its possessions.”

“It is widely recognised and understood today that colonial dictatorship was resisted from the moment of its imposition. Much less widely known, however, is the record of active dissension from the imperial project within the metropole itself. It is with the multifarious forms assumed by this ‘internal’ tradition of dissent that Priyamvada Gopal concerns herself in this extraordinarily valuable and brilliantly readable book. Insurgent Empire covers a vast geographical range (sub-Saharan and north Africa, Afghanistan and India, the Caribbean and the Americas) and tracks historically from the 1857 uprising in North India through to the ‘Mau Mau’ insurgency in Kenya a century later. The book contributes something altogether new and exciting to the existing critical literature in its suggestion that the ‘internal’ opposition to imperial policies and polities was from the outset a dialogical exercise, premised on an active learning from the anti-colonial movements. Gopal shows that the ideas of freedom, justice and common humanity, in the name of which the metropolitan dissenters against imperialism raised their standard, had themselves taken shape in the struggle against imperialism.”

“This impressive book challenges the assumptions that underpin many academic and journalistic understandings of the British empire; it restores the idea of resistance and dissent, placing anti-colonial struggle from the 1857 uprising in India, to Mau Mau in Kenya, at the heart of historical change. It argues convincingly that, when it did occur, British anti-colonialism in the metropole was forged through exposure to imperial insurgency. By doing so, it tackles the whole premise of British liberal imperial progress and benevolence which remains so pervasive to this day. It’s also a hopeful book, indicating ways out of mythological cul-de-sacs. Erudite, but highly readable, this book will be definitely be on my reading lists for students.”

“[Insurgent Empire] sets out to celebrate the political agency of colonised peoples, its importance in bringing an end to empire and the impact it had on metropolitan liberal and radical thinking.”

“A tremendous book that deserves the widest possible readership ... one of the most important books on the British Empire of the last Decade.”

“[Gopal] mounts a powerful challenge to the notion that anticolonial resistance was born of an education in British notions of liberty.”

“An important first step in the telling of a history that has been for too long overlooked.”

“A tour de force likely to shape the debate on empire for years to come.”

“The significant achievement of Insurgent Empire is to excavate the long-muted voices of our native critics of empire … an important and original contribution.”

“A superb study of anticolonial resistance in the British Empire from the 1857 Indian uprising to the Kenyan Mau Mau revolt a century later. . . As it weaves together these intellectual and geographical strands, this wonderful book brings back to life a glorious cast of characters”

“Impressive … Against attempts to portray empire as something distant and past, or as something benevolent and enlightened, approaches such as this one are essential.”

“Impressive in its scope and rigour … Insurgent Empire is an important challenge to those that would rather uncritically accept the myth of a benevolent imperial power than work to celebrate radicalism and resistance as part of a national history.”

“Gopal has a sharp eye for forgotten characters and lost histories.”

“Gopal’s meticulously researched study is a major contribution to the historiography of the British Empire, as notable for its research as it is for its lucid, forceful prose.”

“Insurgent Empire illuminates the role that peoples of the global south have played in the development of ideas of freedom—including in the west itself—within the context of anti-colonial struggles.”

“Incisive … Insurgent Empire demonstrates how often critics have hacked at the pedestals of imperial pieties, and how consistently voices outside Britain have inspired them.”

“A compelling account of how anti-colonial ideas were repeatedly re-litigated in the face of fierce opposition and shows the tireless work of these groups and individuals in slowly constructing and deconstructing concepts of liberty and equality.”

“Excellent … Gopal’s exploration of the interplaybetween anti-colonial resistance in India, the West Indies and Britain deploys biography, history and cultural studies to support her persuasive argument that the colonies were not just the passive recipient of Britain’s ‘civilising mission’ but also the sources of a more refined understanding of key principles like equality and freedom.”

“Few academics are doing so much, and so boldly, to expose how the legacy of empire continues to warp our thinking and institutions.”