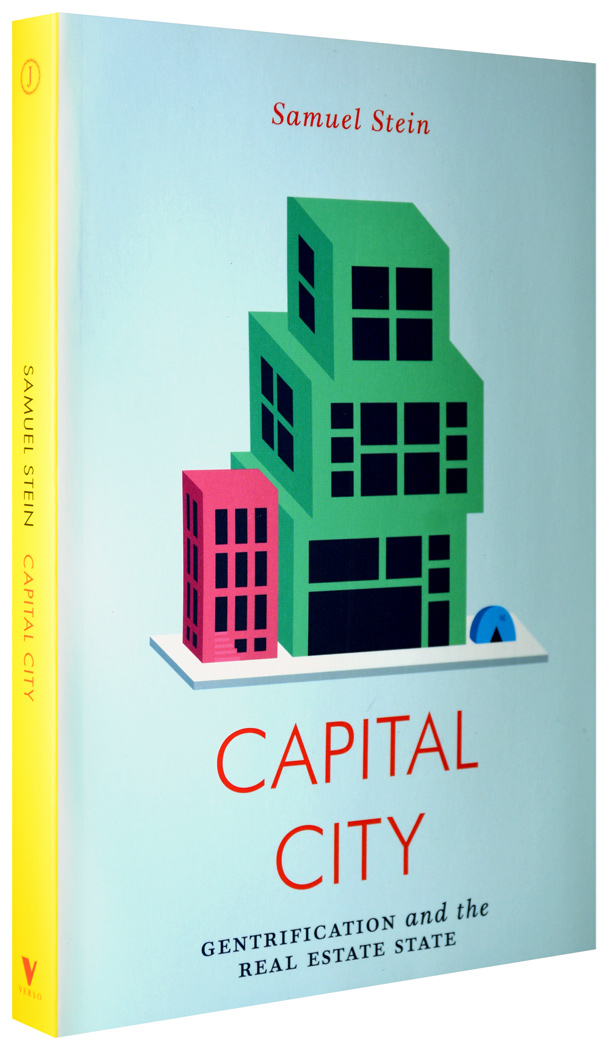 “This superbly succinct and incisive book couldn’t be more timely or urgent.” —Michael Sorkin, author of All Over the Map

Our cities are changing. Around the world, more and more money is being invested in buildings and land. Real estate is now a $217 trillion dollar industry, worth thirty-six times the value of all the gold ever mined. It forms sixty percent of global assets, and one of the most powerful people in the world—the president of the United States—made his name as a landlord and developer.

Samuel Stein shows that this explosive transformation of urban life and politics has been driven not only by the tastes of wealthy newcomers, but by the state-led process of urban planning. Planning agencies provide a unique window into the ways the state uses and is used by capital, and the means by which urban renovations are translated into rising real estate values and rising rents.

Capital City explains the role of planners in the real estate state, as well as the remarkable power of planning to reclaim urban life.

“Samuel Stein’s lucid explanation for how we got to where we’re at shines urgent light on the origins and development of what he incisively calls ‘the Real Estate State.’ Capital City places gentrification in a structurally extensive and intensive urban geography of dispossession. All who struggle for the right to the city should read this book, and realize afresh how capitalism saving capitalism from capitalism must provoke our political imagination.”

“Capital City casts a cold and brilliant light on the underlying political dynamics of global cities and rightly concludes that real estate and finance are in charge. This sobering book has to be part of our toolkit as we try to find the moorings for a powerful democratic pushback in local political struggles.”

“Want to know why the rent’s so high? Samuel Stein meticulously documents and analyzes the rise of the rip-off ‘real estate state,’ the instruments of its power, the invidious ‘plansplaining’ arguments of its defenders, and, above all, its accelerating ethnic and class cleansing of American cities, gentrification-frenzied New York in the vanguard. This superbly succinct and incisive book couldn’t be more timely or urgent.”

– Michael Sorkin, author of All Over the Map

“Samuel Stein has written a book for those tired of merely describing gentrification and displacement, who are looking for explanations as well as new programs for action. Capital City puts it all together, the theory and the practices of urban transformation, with a timely and urgent appeal. This is a lively user’s guide to the changing landscape of the American city.”

– Peter Marcuse, co-author of In Defense of Housing

“[Capital City] alternates a panoptic view with one that looks more closely, from the ground up, at what reckless development does to lives and livelihoods...Explicit in Stein’s narrative is the idea that a different, more democratic kind of planning might lead us to more democratic kinds of cities.”

“A radical view into the heart of the processes [urban planners] oversee.”

“Capital City deserves attention from urban historians for its nuanced analysis of neoliberal urban policy and specific measures that generate inequality and may be also used in service of justice. This book will be a useful tool for a broad swath of people seeking a greater understanding of the urgency of this political moment which grows with every demolition.”

“Vital and devastating ... [Capital City is] unabashed in its advocacy of a more equitable distribution of land and housing. ... A powerful companion to studies of the global rise of informal cities such as Mike Davis’ Planet of Slums, the racist history of housing in Richard Rothstein’s The Color of Law, [and] the horrid effects of losing one’s home in Matthew Desmond’s Evicted.”

Left in the Bay
comments

Who Owns the Park?

The continued existence of People's Park proves something dangerous: you, too, can seize something from the most powerful people in town, make it into whatever you want, and hold it for half a century.

Books that propose alternative forms of city-making and architecture.