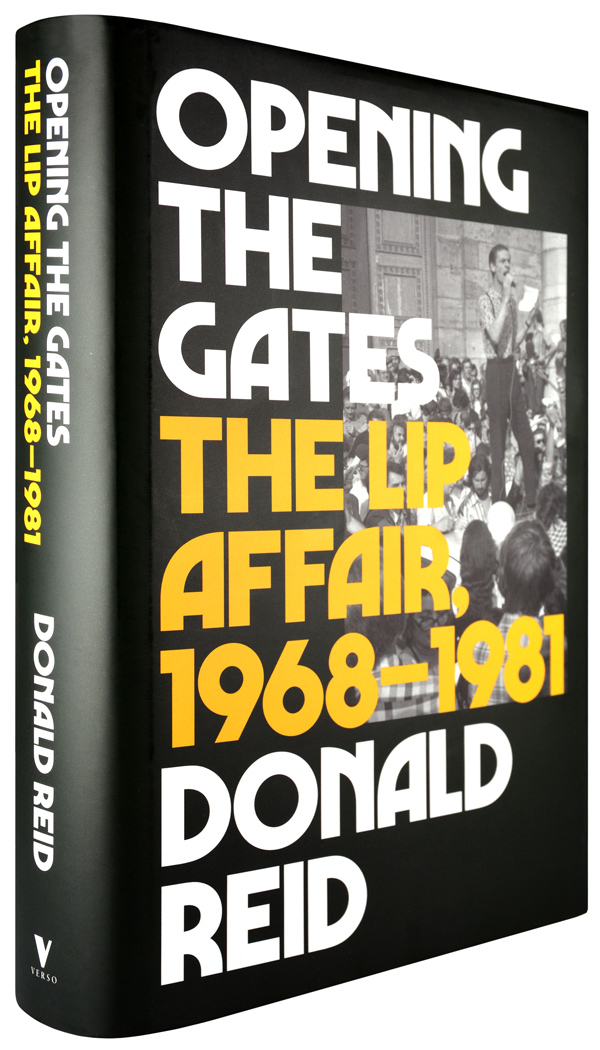 In 1973, faced with massive layoffs, workers at the legendary Lip watch firm in Besançon, France, occupied their factory to demand that no one lose their job. They seized watches and watch parts, assembled and sold watches, and paid their own salaries. Their actions recaptured the ideals of May 1968, when 11 million workers had gone on strike to demand greater autonomy and to overturn the status quo. Educated by ’68, the men and women at the Besançon factory formed committees to control every aspect of what became a national struggle. Female employees developed a working-class feminism, combating workplace sexual harassment and male control of the union. The endurance of the Lip movement and its appeal through the 1970s came from its rich democratic, participatory culture. The factory workers welcomed supporters and engaged with them, an expression of solidarity between blue-collar and student activists that built on the legacy of 1968.

Opening the Gates: The Lip Affair, 1968–1981 is the first account of all facets of the experience, drawing extensively on unpublished materials to reconstruct the vision and practice of those involved. The Lip workers’ struggle was the last widespread expression in France of the belief that creativity and moral autonomy are the driving force of social transformation. It brought about what Sartre called “the extension of the field of possibilities”—not just for workers, but for all those who gave the movement support and meaning.

“Donald Reid has not just written a masterpiece of modern labor history. His brilliant narrative about the Lip workers who ran their own factory makes clear that they were blazing a new direction for the left. Although their experiment in self-management did not survive, it should inspire anyone who believes in the democratization of everyday life. When workers in the middle of France leaped beyond being just employees or aggrieved strikers, they showed that another world might indeed be possible.”

“Don Reid’s history of the protracted struggle of workers in the Lip watch factory is the most comprehensive and imaginative account that exists in English or French. What one worker called “the perfume of self-management” wafts through the pages of this book, bringing alive the movement that defined social upheaval in France in the long 1960s.”

“In 1973, French workers at the Lip watch factory in Besançon occupied their bankrupt plant and launched a movement that became a cause célèbre, attracting the attention of politicians, intellectuals, religious leaders, labor organizers, and ordinary citizens. In this magnificently detailed book, historian Donald Reid traces the origins of the movement and follows it through to its dénouement. It will surely be the definitive work on what may have been the last attempt by workers anywhere in the West to demonstrate that self-management was not a pipe dream but a genuine alternative to actually existing capitalism.”

“Donald Reid’s riveting account of workers’ celebrated campaign to transform the Lip watch factory into a crucible of workplace democracy offers readers a path-breaking new history of France’s ‘long 1968.’ Sobering and inspiring reading, Opening the Gates is an extraordinary achievement by a gifted historian in full command of his craft.”

“A must-read for historians, Reid’s study will also open up for general readers the atmosphere of a time so far in the past that it is forgotten, yet so near that history has yet to remember it.”

“Although I have been living in France for the past ten years, I regret to say that the Lip Affair was unknown to me until now, but having read Donald Reid’s description of what transpired, I can understand why. It is simply stunning how the mass media arbitrarily select those events in society which they want to highlight, and those which they want to ignore ‘in the interests of the viewer.’ I am convinced that the ‘gate-keeper’ policy of the mass media is one of the primary reasons why the public in general today remain detached from many key issues facing the planet, including consumerism, social inequality, and the onrushing environmental disaster. The multiple issues still confronting women today are of course foremost in my mind when I write this. The ways in which the Lip workers—as Reid describes—confronted their problems, including their strategies in dealing with the media, are therefore truly inspiring, and this book clearly deserves the widest possible dissemination across the social and political spectrum.”

“This gripping and beautifully researched book may well be the definitive work on the Lip Affaire—that heroic struggle of French workers who in 1973–74 transformed their company into a combative self-administered community. Donald Reid’s encompassing reconstruction is not only empathetic and political; it is also a significant contribution to French social history ‘from below’ between May 68 and the beginning of Mitterand’s presidency in 1981.”

“Donald Reid’s book, carefully documented with a mass of detail, is to be welcomed for reminding us of an enthralling page from working-class history.”

“Donald Reid’s magisterial reconstruction of the Lip ‘affair’ of the 1970s restores a crucial and neglected storyline about the long 1968.”

“What stands out is [Opening the Gates’s] thrilling retelling of an occupation and its reminder to us that there are many different ways to live and work.”

“Sophisticated … a major contribution to the history of workers’ control.”

“For anyone wishing to learn about France (and, in fact, Europe) in the 1970s, Opening the Gates will be required reading for years to come.”

“Don Reid’s excellent book is happily something of a ‘throw-back’ study to the 1970s.”

“Opening the Gates is a lasting and remarkable account of French labor.”

Our selected History reading for the academic year ahead: all 40% off until the end of September.

A reading list of key titles on the history of labor organizing and class struggle in the US.