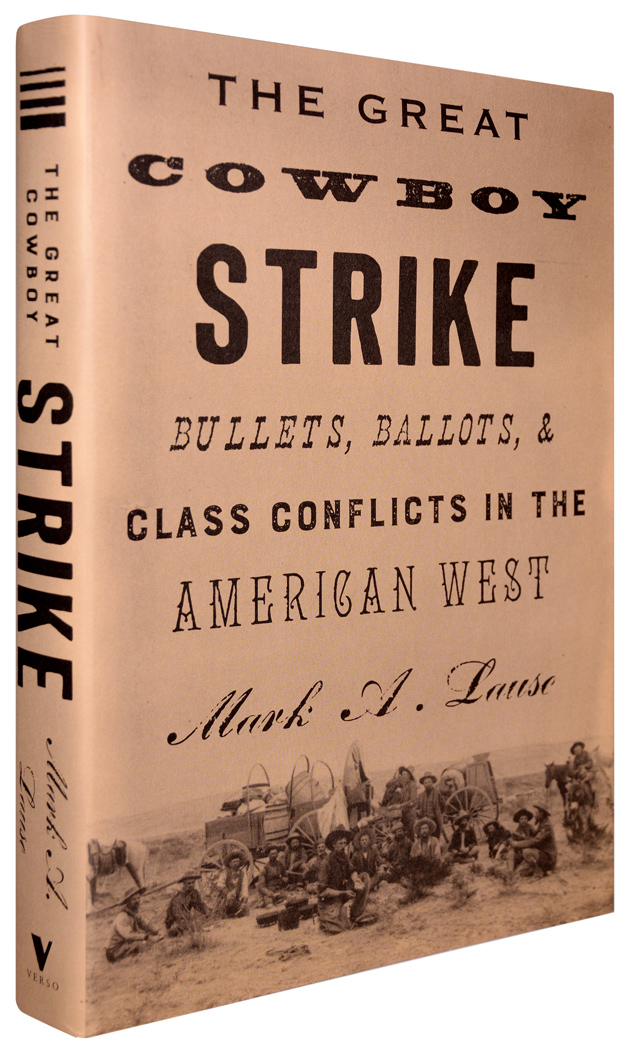 When cowboys were workers and battled their bosses

In the pantheon of American icons, the cowboy embodies the traits of “rugged individualism,” independent, solitary, and stoical. In reality, cowboys were grossly exploited and underpaid seasonal workers, who responded to the abuses of their employers in a series of militant strikes. Their resistance arose from the rise and demise of a “beef bonanza” that attracted international capital. Business interests approached the market with the expectation that it would have the same freedom to brutally impose its will as it had exercised on native peoples and the recently emancipated African Americans. These assumptions contributed to a series of bitter and violent “range wars,” which broke out from Texas to Montana and framed the appearance of labor conflicts in the region. These social tensions stirred a series of political insurgencies that became virtually endemic to the American West of the Gilded Age. Mark A. Lause explores the relationship between these neglected labor conflicts, the “range wars,” and the third-party movements.

“Widely ranging across time and space, this engaging history moves gracefully from cowboy work culture, to politics, to The Wizard of Oz. Lause enhances his stature as the U.S. historian most able to connect agrarian radicalism to union organizing. A stirring account of western labor radicalism and its limitsat times in the face of racism and of unity among settlers across class lines.”

“Focusing on industrial workers in the Northeast and Chicago, U.S. labor history largely ignores the rural proletariat, leaving the impression that none such existed in the vast expanse of the cattle and agribusiness industries west of the Mississippi. Historian Mark Lause has turned that erasure upside down with this meticulously researched and beautifully written history of the of cattle worker's militancy and organizing. Although the 1880s cowboy strikes are at the heart of the story, Lause takes the history from the Civil War's Missouri Confederate guerrillas and ethic-cleansing Texas Rangers and the genocidal campaigns of the Army of the West against the Plains peoples of the bison and the Apaches, into the 20th century and the organized revolt of tenant farmers in Indian Territory in opposition to conscription for World War I, the 1917 Green Corn Rebellion. Both these proletarian actors, cowboys and landless farmers, were made up of not only the white cowboys-as-gunslingers of Hollywood imagination, but Black, Indian, Mexican, and Anglo.”

“Mark Lause has made a major contribution to Western US history, to areas of working class history little understood, and to the connection of these developments with a drastic change in regional ecology. This book will stand, and suggest much about the current "Gilded Age" that will be vital to understand today.”

“Lause’s book roams a West that sounds suspiciously familiar as corporations use any means to strengthen their positions at all costs. And it stops to tell other surprising stories—about, for example, the Industrial Brotherhood, an interracial labour movement that originated in Missouri and ran some of the first integrated schools, or vigilante groups like Stuart’s Stranglers, who were hired to hunt for strike-leading cowboys and other troublemakers.”

“Antimonopoly sentiments swept the Midwest and Plains in the 1870s and 1880s. Organizations such as the Grange, Farmers Alliances, Knights of Labor, and many more fought back against corporate domination. Mark Lause astutely reveals the links between all of this and the cowboy strikes against large corporate-the mid-1880s. As with the more famous Johnson County War in Wyoming,owned ranches of the Texas Panhandle in the mid-1880s. As with the more famous Johnson County War in Wyoming, corporate interests resorted to violence to get their way. Professor Lause makes a very strong case for much of the western violence of this era (especially family feuds) being more political and focused than previously thought. This book has a lot to offer in linking together the various forms of local and nationwide antimonopoly activities of this era.”

“With his tale of the Great Cowboy Strikes of the mid-1880s, Mark Lause sweeps the dust off of the historical record and introduces us to the ordinary men — Jack Flagg, Tom Harris, and Broncho John Sullivan —  who drove cattle to northern rail heads, boldly demanded a living wage, and sought, without success, to sustain organizations that might challenge increasingly concentrated and violent corporate control of the West. Lause also lends a fresh perspective to the stories of more familiar characters and events, such as Billy the Kid, Henry George, and the Coffyville, Kansas, bombing. He has an eye for detail, which not only give depth to the people and events he describes but also explode the mythology about the West. The chief myth that Lause is concerned with is the notion that, in the West, an egalitarian society took root in which an individual’s fate turned on their abilities, work ethic, and strength of character. Purveyors of the mythology of the West deny that corporate control dominated western politics and economics and ultimately crushed movements of “the people” in the form of Greenbackers, Populists, the Knights of Labor, and the Union Labor Party. The history of the “feudal” economy of cattle kingdoms in the Texas Panhandle, for example, were not simply forgotten but were instead methodically snuffed out and buried, Lause argues.  Lause sketches for the reader the life and backgrounds of the average cowboy, the conditions and practices that gave rise to a collective ethos on the range, and cowhands’ relationships with local communities and large ranch owners. One turning point in the latter came with the large owners’ fencing of once open land and the banning of the cowboy practice of claiming unbranded mavericks as their own. That tradition, which owners had reclassified as a crime —  “rustling,” historically had afforded men with otherwise limited time in the saddle a way up and out of waged, hard, seasonal labor. Lause notes that, while middle-class elements in town frowned on cowboy culture, ultimately, they more often than not sympathized with their fight against the corporate hired guns who murdered strike leaders and their allies. The bloodbath was the owners’ answer to a series of successful and widespread cowboy labor protests, which were launched at roundup time, when owners were most vulnerable. The cowboy strikes, while not well known generally, were far more widespread and significant than historians have understood previously. Lause’s intensive research connects those strikes to the larger sweep of not only western history but US history — to the Greenback and Populist movements, the Knights of Labor, railroad expansion, wars of extermination and repression against native societies, the Civil War, and Reconstruction. Geographically, he casts a wide net in his research, plumbing small and large local papers in Texas, Wyoming, Kansas, Arkansas, New York, Chicago, Utah, Iowa, Nevada, Minnesota, Montana, and Colorado.  Lause establishes the supremely violent nature of western conquest and the political system created in the wake of US victory. That system unleashed a brutal war against independent, grassroots work-class and farmer movements. The political feuds that wracked the region were not idiosyncratic but instead “reflected the pervasiveness of political violence.” Class conflict was as violent in the West as it was in the East, he contends. While he gives the reader a blow-by-blow account of multiple gunfights, the most glaring pattern that emerges from his work is the one-sided, mercenary nature of many of the killings, such as the vigilante violence of “Stuart’s Stranglers,” at the behest of the Montana Stockgrowers’ Association, against “rustlers.” Beyond brute force, the machinations of pretender reformers undercut and distracted the grassroots movements. These seeming spokespeople for “labor” helped to divide supporters of independent and egalitarian politics along Republican and Democratic lines. Lause explores the political intrigues of William Carsey — “a pioneer of political dirty tricks and dark ops.” Lause is an expert guide with a wry, occasionally wicked, sense of humor. His knowledge of western fact and fiction is wide-ranging, so that we are treated to a tour of the western genre, from the Great Train Robbery, to John Ford’s films, to Deadwood and Blazing Saddles. For Lause, the violence visited upon the cowboy’s movement and radicals and reformers of various stripes  was rooted in the impulse of large corporations to seize as much power and control from the “little people” as possible, especially in the wake of the disastrous winter of 1886-1887 and the mobilizations of discontented citizens. Discontent was rife among the “little people, as electoral support for the Union Labor Party candidate in Texas Panhandle counties demonstrated. Cause’s book bears witness to the existence and significance of this contest, and the bloody, cruel reprisals that followed across the northern to the southern Plains.”

“In the fictional world of America’s favorite rugged individualist, the cowboy exists in a place out of time, unconnected to his real world, late nineteenth century Gilded Age America. But, cowboying as an occupation was as much a result of industrialization as factory or railroad work. This book pointedly connects the economic and political struggles of the new urban industrial working class to that of the brutally exploited seasonal agricultural workers known as cowboys. While they were indeed overworked and underpaid, as demonstrated in this fine work, cowboys were no fools. They saw the staggering gap between the fortunes they made for the ranching corporations and the starvation wages they were paid. Here readers will discover that real cowboys, their work, wages and politics are more fascinating than the facile popular myth. With rich detail, Mark Lause places the Great Cowboy Strike in its proper economic, political and social context. Think you know something about 1880s Texas cowboys? Read this book.”

A reading list of key titles on the history of labor organizing and class struggle in the US.

Featuring books on migration, identity politics, the rise of right-wing populism and the struggles of 1968.