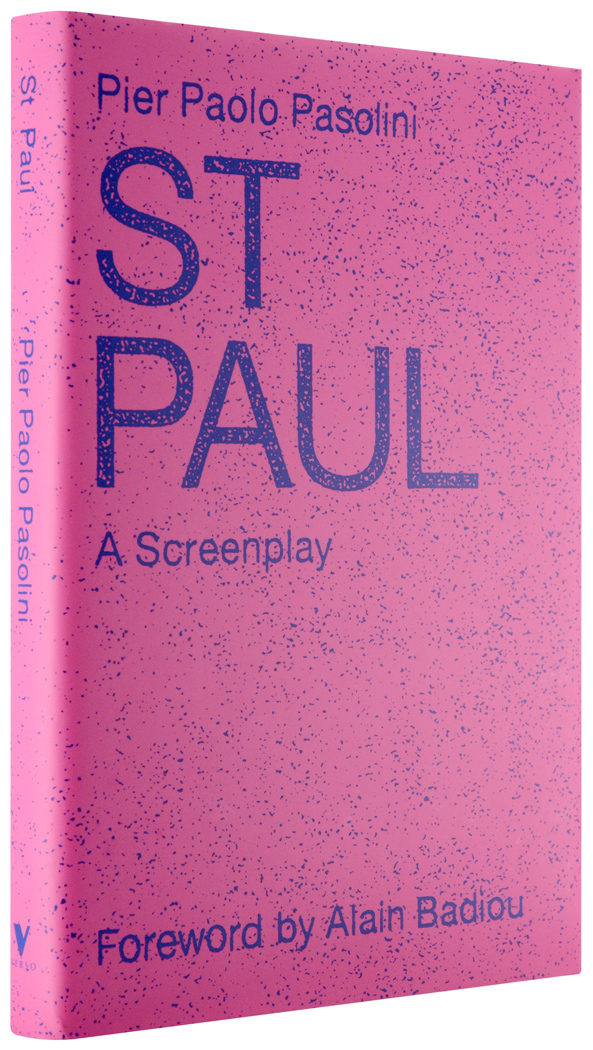 "Mingles an intellectual leftism with a Franciscan Catholicism." – New Statesman

Presented here for the first time in English is a remarkable screenplay about the apostle Paul by Pier Paolo Pasolini, legendary filmmaker, novelist, poet, and radical intellectual activist. Written between the appearance of his renowned film Teorema and the shocking, controversial Salò, or the 120 Days of Sodom, St Paul was deemed too risky for investors. At once a political intervention and cinematic breakthrough, the script forces a revolutionary transformation on the contemporary legacy of Paul. In Pasolini's kaleidoscope, we encounter fascistic movements, resistance fighters, and faltering revolutions, each of which reflects on aspects of the Pauline teachings. From Jerusalem to Wall Street and Greenwich Village, from the rise of SS troops to the death of Martin Luther King, Jr, here— as Alain Badiou writes in the foreword—"Paul's text crosses all these circumstances intact, as if it had foreseen them all."

This is a key addition to the growing debate around St Paul and to the proliferation of literature centred on the current turn to religion in philosophy and critical theory, which embraces contemporary figures such as Alain Badiou, Slavoj Žižek and Giorgio Agamben.

“Line by line, Pasolini is both poet and precise and sneering Marxist.”

“Pasolini understood that Paul offered a way of understanding the turbulent political climate of his own time, as well as his visionary place within it. This insight, still radical today, prefigures much of the current scholarly work on Paul, and the screenplay is also an invaluable contribution to a growing body of Pasolini’s works in English translation as well as Pauline scholarship. Though Pasolini fans might lament the film that never was, Saint Paul, in its unfinished state, remains a burning polemic open to questions of our day.”

“A richly intertextual document that looks back to the New Testament and ahead to Paul’s contemporary rehabilitations like those of Alain Badiou (who wrote this volume’s forward).”

“Pasolini’s Paul is not only an institution builder but also an institution wrecker, identifying the church’s own stagnant orthodoxies and critiquing New York and the Western world’s unchecked capitalism...[an] astute introduction and crisp translation of this surprisingly contemporary screenplay.”

“Pasolini seems to me indisputably the most remarkable figure to have emerged in Italian arts and letters since the Second World War ... His poetry is an important part of his passionate, proud, historically vulnerable body of work, a work in and with history; and of the tragic itinerary of his sensibility.”

“Pasolini was what can be termed a citizen-poet. He was concerned with his homeland and expressed his feelings in his work. Patriotic poetry usually comes out of a right-wing tradition and is nationalistic, but Pasolini’s great originality was to be a citizen-poet of the left ... He wept over the ruins of Italy but without a hint of rhetoric. He was a modern who used the classical tradition. Rimbaud, the poet of the Paris Commune, the most revolutionary of poets, remained his greatest influence. In the years after the Mussolini dictatorship, he adhered, like many of his compatriots, to an unorthodox brand of communism, that was both Christian and utopian, and these feelings for the poor and underprivileged motivated his own poetry and films.”

Subversive Pasolini: La Ricotta and The Gospel According to Matthew — a conversation between Nina Power and Geoffrey Nowell-Smith

The Police vs. Pasolini, Pasolini vs. The Police

This piece by Wu Ming was published in Italian in October 2015, in the online edition of Italian weekly magazine Internazionale. This translation by Ayan Meer first appeared on the Wu Ming Foundation blog.