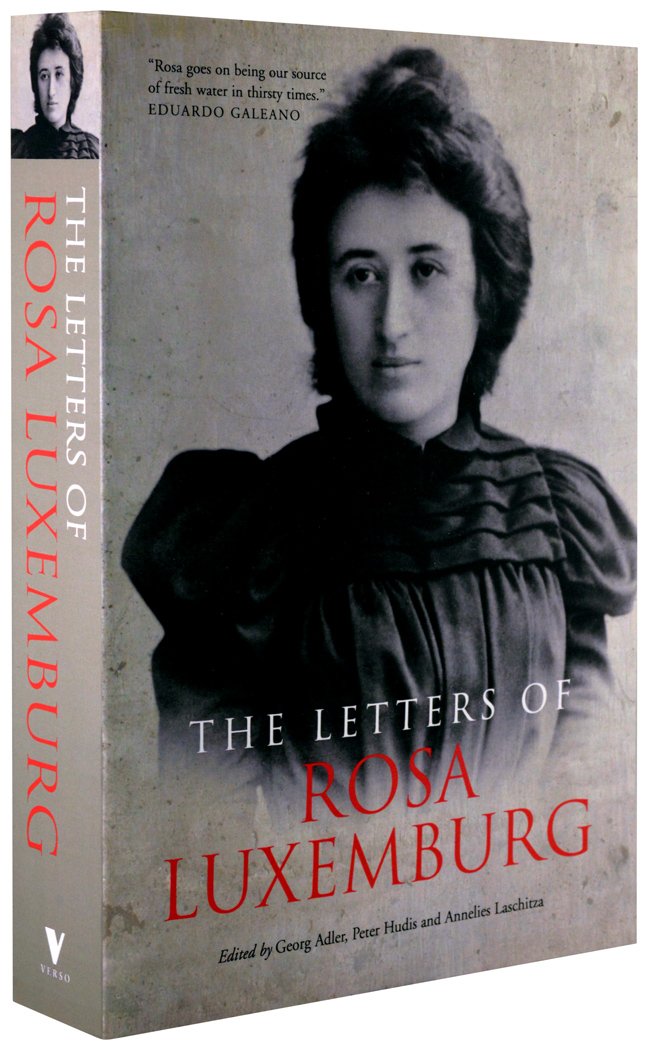 Letters from the heroic German revolutionary to her comrades, friends and lovers
The most comprehensive collection of letters by Rosa Luxemburg ever published in English, this book includes 190 letters written to leading figures in the European and international labor and socialist movements—Leo Jogiches, Karl Kautsky, Clara Zetkin and Karl Liebknecht—who were among her closest friends, lovers and colleagues. Much of this correspondence appears for the first time in English translation; all of it helps to illuminate the inner life of this iconic revolutionary, who was at once an economic and social theorist, a political activist and a lyrical stylist. Her political concerns are revealed alongside her personal struggles within a socialist movement that was often hostile to independently minded women. This collection will provide readers with a newer and deeper appreciation of Luxemburg as a writer and historical figure.

Thank you to David Gaharia for helping to support the translation of this book.

“One cannot read the writings of Rosa Luxemburg, even at this distance, without an acute yet mournful awareness of what Perry Anderson once termed ‘the history of possibility.’”

“Transports us directly into the private world of a woman who has never lost her inspirational power as an original thinker and courageous activist … [and] reveals that the woman behind the mythic figure was also a compassionate, teasing, witty human being.”

“She emerges as one of the most emotionally intelligent socialists in modern history, a radical of luminous dimension whose intellect is informed by sensibility, and whose largeness of spirit places her in the company of the truly impressive.”

“[W]onderful ... The self-portrait in these pages is that of a professional revolutionary whose vocation is, if you'll pardon the expression, spiritual. Reading ... this book, I could not help falling in love with you, dear Rosa.”

“Paced almost like a novel, the 28 years covered by this collection pass by almost too quickly.”

“The Letters of Rosa Luxemburg is a ... kind of memorial, a kind of sliver of one woman’s life bound together in one place ... Rosa Luxemburg comes alive in these pages ... if you love or admire or are just fascinated by [her], then you’ve no excuse not to buy this excellent book.”

“This huge project is long overdue. Luxemburg’s correspondence reveals an extraordinary range and breadth of concerns and interests”

“Rosa goes on being our source of fresh water in thirsty times.”

“Intrepid, incorruptible, passionate and gentle. Imagine as you read between the lines of what she wrote, the expression of her eyes. She loved workers and birds. She danced with a limp. Everything about her fascinates and rings true. One of the immortals.”

“The Letters of Rosa Luxemburg come as near as anything to the way this extraordinary woman talked with loved ones and friend ... a wonderfully compelling record, both poignant and timely.”

“[Rosa] Luxemburg expressed unfailing passion in her letters ... This volume gives personal insight into a remarkable (and controversial) woman and adds meaningful context to any study of early Western socialism.”

“Fascinating ... these passionate letters, which commemorate the 140th anniversary of Luxemburg’s birth, show the living, breathing and loving woman behind the legend of 'Red Rosa.'”

“[Rosa Luxemburg's] letters, with all their exquisite details, read as well as any novel ... Personal or political [they] are beautiful, powerful, and succinct.”

“This English-language edition of selected letters of Polish-born Marxist thinker and founder of the German Communist Party, Rosa Luxemburg, who was assassinated in 1919, is the most comprehensive published in English, with over two-thirds of the letters translated here for the first time.”

“The Letters of Rosa Luxemburg includes everything from Luxemberg’s youthful mash notes to her theoretical arguments, as well as her uncanny prediction of 'pogroms against Jews in Germany.'”

“A welcome contribution to a renewed interest in this key figure of the Marxist tradition.”

“Verso is once again to be congratulated for this publishing inititiative, in an excellent translation by George Shriver ... [The letters] give a unique insight into her character, her deep humanity as well as her passionate commitment to the struggle for socialism.”

“[Luxemburg's letters] are extremely well written, elegant in their use of language as well as exciting in their expression of ideas. The letters within this thick volume show indeed how much we have lost our ability to communicate with the decline of letter-writing ... taking the time to actually correspond (as Luxemburg did throughout her life), to actually compose a letter, produces art as well as communication. And that is at the heart of The Letters of Rosa Luxemburg, that is precisely what makes this book so absorbing and so pleasurable to read.”

A Letter from Rosa Luxemburg on her Birthday

A letter written from prison by Rosa Luxemburg on March 5th 1917.

150 years after the birth of Rosa, what is the heritage of her works and activity? Peter Hudis, translator of the on-going Complete Works of Rosa Luxemburg series, talks to Yurii Colombo.

40% off all our Rosa Luxemburg reading to mark the 150th anniversary of her birth.