A Civil State of Emergency—a photoessay by Ariella Azoulay 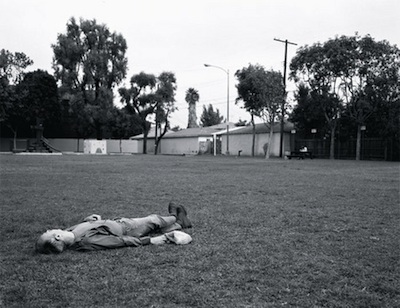 The man sleeping in a public park in Jeff Wall's Citizen, 1996, represents an act of criticism, a transgression of borders, an inspiring example of both potential and practical citizenship. Ever since seeing Wall's photograph at Documenta 10 in 1997, whenever I see anyone asleep in a public park-whether someone homeless or someone, like the man in this image, who looks like he or she has a home to go to-I cannot help thinking of him or her as claiming a share in a public space. And if citizens can assert their right to sleep in public, they can also rebel against a sign prohibiting the erection of tents, such as the one that addresses visitors to Manhattan's Zuccotti Park. 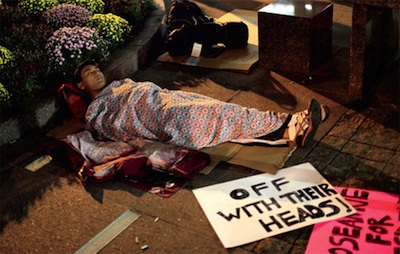 It obviously makes no sense to speak of the massive outpouring of citizens into the streets in Cairo, Madrid, Tel Aviv, and New York merely as a deliberate flouting of municipal regulations. Many people, no doubt including some who are protesting now, would in normal times and under normal circumstances sympathize with what Zuccotti Park's owners wrote to the New York police commissioner:

The protesters have set up living spaces with tarpaulins, mattresses, sleeping bags, tables, bookshelves, gasoline-powered generators and other items that are inconsistent with the rules and normal public use of the Park. At all hours of the day and night, protesters are sleeping on benches and walkways, blocking normal pedestrian access to the general public and preventing cleaning and maintenance workers from performing necessary upkeep. When not blocked by protesters, the walkways throughout the Park are blocked by the various items and equipment brought to the Park by the protesters.

In response to the owner's complaints, the demonstrators began to clean the park with the same dedication with which they would tidy their own homes. Indeed, the very fact of crowds carrying out in the open activities that usually take place in the intimacy of the home-sleeping, doing the dishes, preparing food, etc.-radically disrupts the relations between these two spheres. Rather than seeking to abolish the boundary between them, however, the civil struggle that has been spreading to the West from the Arab world seeks to restore these domains, but differently from how they have previously been instituted. In the US and elsewhere it is evident that neoliberalism promoted a two-faced process: Private space became unaffordable for many citizens, while the privatization of the public realm reached a point where citizens' use of it for all but the most passive purposes became an infringement of the law.

Until the public realm benefits all of society and the right to affordable housing is secured, occupiers around the world will not leave voluntarily, and they will insist on populating public space with the clusters of private zones they have instituted through tents, mats, and plastic sheets. Their demands cannot be fulfilled within the existing structure of corporate democracy or the nation-state; they amount to a call for a radical change in the ways the world is shared, a call for a regime in which the interests and well-being of the entire population-not only those the government defines as citizens-find expression in a new civil language and set the stakes for a new politics. 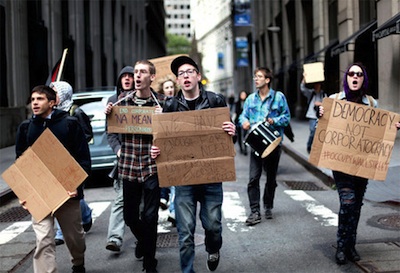 I propose that we interpret the act of constructing private space in the heart of public space as the declaration of a civil state of emergency. Rather than any government, citizens themselves have declared this state of emergency-which is also a demand for the reorganization of the polis, the environment in which they live.

A civil state of emergency is very different from a demonstration or local strike. It is the suspension of the existing state of affairs, in which the law has deprived citizens of access to both private and public space. The declaration of this state of emergency also means that the duration of this occupation will not be determined within the logic of the present regime but by the citizens themselves. The people will no longer support a regime that has sanctified the corporation and the nation, which has forgotten the citizens whom it is supposed to serve and for whom it should exist. One image typical of the occupation movements is the annotated photograph with a caption or slogan, such as HOW MANY WALL STREET THUGS DOES IT TAKE TO BRUTALIZE A WOMAN? Another is the sign worn on the body: A cardboard surface that conveys a complaint or a proposal has become a necessary accessory in the city square. Rather than the bulk-printed posters that used to be distributed at demonstrations, each individual protester now has his or her own sign, with a personal justification for participating in the declaration of a state of emergency. This form of occupying public space enables citizens to learn about themselves from one another-and to understand what they experience privately as a part of a general structure of oppression, unbounded by the city or even the country in which they live. 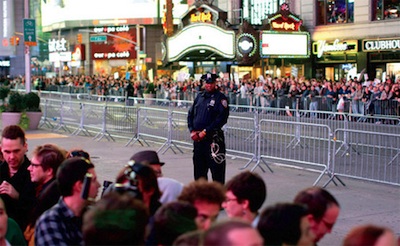 One would think that a large protest needs a large square, but New York's Zuccotti Park is a small plaza, where, moreover, protesters have been allowed to assemble only under limited conditions. Yet even a small public park can, contrary to the laws of physics and the market, expand and grow seemingly endlessly-providing more and more room for teach-ins, a public kitchen, a library, a first-aid area, performance spaces, and, crucially, encounters with many strangers. The bustling activity in which thousands of protesters partake daily is a kind of language, one diametrically opposed to the regimenting and compartmentalizing language of sovereign power, which separates citizens from one another and-out of fear of the consequences-seeks to prevent their contingent gathering to share a public space. After a recent visit to Zuccotti Park, I stood on the sidewalk in order to photograph the square from the outside. At once, a policeman-one of dozens surrounding the park-pounced on me and ordered me away, claiming that on the sidewalk "you have to keep walking." This was of course a lesson in the language of sovereign power: as if standing on a sidewalk were against the law!

The distance between these two languages was in plain view on the evening of October 15, the "global day of protest." In New York, Times Square then became the site of occupation. Tens of thousands of demonstrators were crowded on the sidewalks behind mobile fences, facing one another yet separated, as hundreds of policemen with shiny plastic handcuffs paced the streets, which were demonstrably emptied of citizens. Once in a while a vehicle drove slowly down Broadway, as if to prove that demonstrators would not be allowed to disrupt the city's traffic. The language of the sovereign was spoken univocally in the space between the groups of protesters, and the police clearly enjoyed making use of all the means at their disposal to make it difficult for the citizens to declare a civil state of emergency-yet this is exactly what they nevertheless managed to do.

The violent dismantling of the encampment in Oakland, California, in October was another expression of the fact that the civil use of public space is incompatible with the present political order. When citizens no longer have a place in the polis, they declare a state of civil emergency each time they reoccupy the commons and assert their right to use it.

The forgotten language that citizens have begun to relearn-the language of bodies, of chanting in groups, of demands and complaints-will not be easily extinguished. People are eager to use it and to improvise with it, and its silencing will require more than plastic cuffs, tear-gas grenades, and rubber bullets. And we are learning, from one city after another, that this new civil language does not need much in order to spread: It is contagious.

Which of these two languages will win? Time will tell. Even the fact that one has no choice these days but to say, "Time will tell," shows that perhaps we are indeed standing at the threshold of a kind of revolution, driven forward by the continuous articulation of a new language, in public and by the public. 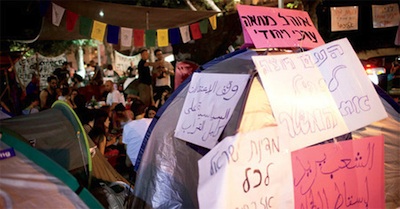 The Arab Spring did not pass Israel by. When it arrived in the streets of Tel Aviv this past summer, the life of Palestinians under the Israeli regime was not a central issue. But for almost the first time since the founding of the state of Israel, citizens challenged the national agenda, in which keeping the Palestinians on the threshold of catastrophe has played a major role. The protesters' numerous demands meant that in every single encampment in Israeli cities, one major principle took root-to allow for heterogeneous claims and to reject any exclusionary stake. In the context of Israeli apartheid, this is itself a radical position: It transformed the demonstrators' demands for "social justice" into a universal claim. And the choice of Israeli citizens to occupy public space with tents cannot be separated from the tent being itself already a vehicle of meaning, a kind of statement in use in the local sovereign language. The very walls of a Palestinian house are penetrable by Israeli force. Given the risk of demolition of their homes, Palestinians may turn into tent dwellers at any given moment. For the Israeli regime, the tent is considered the natural home of Palestinians, their predicament, the essence of their very existence.

In choosing the tent, Israeli protesters replicated a symbol of the state's oppression of the Palestinian population, but in doing so, they inverted its signification, turning it into a challenge to the political system. Among other things, they were demanding recognition of the "regime-made disaster" that has been ongoing since Israel's foundation, the destruction of landscapes and environments, the damage to cities and villages, the invasions and distortions of public and private space-all of which affect the entire governed population. Now, when the whole world chooses the verb occupy to designate the reclamation of civil rights in public space, the need to end the Israeli occupation of Palestine and the need to "reoccupy" public space all over the world are linked more clearly than ever. One sign carried by a woman at a recent protest spells it out: OCCUPY WALL ST. NOT PALESTINE. 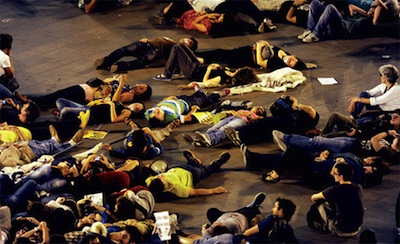 The growing vocabulary of the new civil language includes models of sharing and allocation, forms of learning and listening, amplification through the "human microphone" and communication through hand signals, procedures for the distribution of food and other goods, logistics of recycling and site maintenance, participatory decision making, the redefinition of leadership and struggle, solidarity with populations whose dispossession is conceived as a symptom of a more widespread regime, new approaches to the flexible distribution of space and the exercise of authority, and public dancing and singing. This language cries out for public space, and it cannot be articulated only in the hours and locations permitted by the police. So its speakers, every day and all over the world, occupy more and more spaces. Sometimes they assemble for a specific purpose, as when Bostonians resolved to occupy the local Goldman Sachs offices, or demonstrators in Tel Aviv created a human chain to protest against the deportation of migrant workers. But even when their momentary aim is only loosely defined, citizens are performing a civil language, and in so doing, they recognize its power and learn its possibilities.

This essay first appeared in the December 2011 issue of Artforum. Reprinted with their kind permission.

Translated from Hebrew by Tal Haran.

Ariella Azoulay is Director of the Photo-Lexic International Research Group at the Minerva Center at Tel Aviv University. A Civil Imagination: A Political Ontology of Photography will be published in July 2012.