Image of the Year

2019 has been a year of planetary unrest, with mass struggles springing up in places as diverse as Haiti, France, Ecuador, and Iran. Yet, it is the struggles in Chile, sparked by a 4 per cent rise in the price of a metro ride, that have been most emblematic of this new cycle of mass mobilisation. In this article, Joshua Clover reads the striking image of a train on fire in the Elisa Correa station of the Santiago metro, and asks what it can tell us about our new era of riot and protest.

The image of the year, not necessarily the best or most dramatic but the one that contains the year within it, is drawn from a video from Madero CL showing a train on fire in the Elisa Correa station of the Santiago metro. A series of coaches sits on the far track, flames purling from almost every window. It seems in every regard a dream image, like riding a train through a forest on fire but inverted in the logic of the unconscious. The train is on fire, we are the forest. It has come to us.

Struggles in Santiago begin in October following a four cent increase in the price of a metro ride. Youth fare evasion on a mass scale becomes seizure of stations, open showdowns with the national police, dramatic repression, mass looting, burning of buses, burning of stations, and widespread accounts of torture, rape, and murder by cops. President Piñera rolls back the fare bump eleven days in. As has become the pattern, the winning of the initial demand — riots, I will say again, are easily your best bet for gaining practical reforms — happens swiftly and stops nothing. Four cents. It matters that the demand is about getting around, but it matters more that it is the leading edge of a thousand grievances that sum to immiseration, shoved down over a few decades and returning over a few days. Rise like lions after slumber. “Out of nowhere” always means “out of history.” The lions awaken in other cities, a march of one million roils the nation, and in November, the government offers a referendum on a new constitution. From turnstile-hopping to constitutional collapse takes a little more than a month. 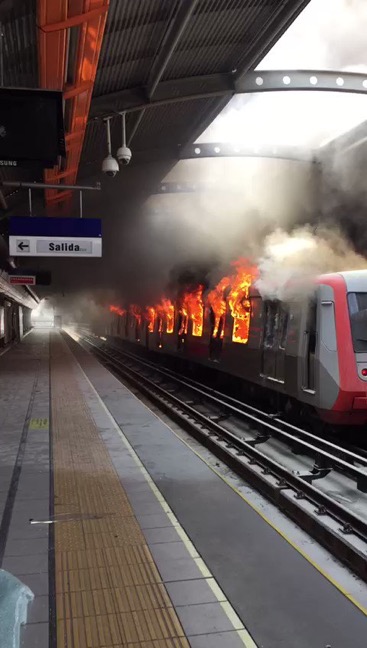 Santiago is one case among dozens. It has been a year of extraordinary social upheaval, more widespread than 2009 when the global economic collapse inflected global immiseration, more than in 2011 when that volatility took form with the Arab Spring, the movement of the squares, Occupy, and more. A full accounting of 2019’s major riots, uprisings, insurgencies, and protorevolutionary moments would crash this blog, so extensive that one feels out of step living in a backwater like the United States that could not be bothered to hurl itself toward the fires.

It would be tendentious in the extreme to pretend there were a single description of the planetary unrest. One can of course dial down the specificity until a spectrumatic explanation emerges — but by that point the explanation will be so vague as to be meaningless (“neoliberalism” was veritably purpose-built to fulfill this duty, explaining everything and consequently explaining nothing). Within the fires of 2019, some limited amount of pyromancy is possible. One figure stands out amidst the flames. The grievances are most often oriented by the market, by the cost of survival. Over and over the antagonisms of 2019 burst forth over the costs of fuel and transportation: Haiti, France, Ecuador, Iran, Chile, to name just a handful. Not for nothing do we speak of the era of circulation struggles. In a deeply suggestive variation on the theme, Lebanon falls into unrest over an internet surcharge. One thinks of Paul Virilio’s prescient 1986 description of the desktop computer as “the last vehicle,” not so much how we work as how we get there.

So then: the new circulation struggles, even as they have by any measure eclipsed production struggles, are not divorced from the matter of labor. At least on occasion they turn on the inescapable question of how we get to work, and on the work of moving commodities around, and the like. There is no mystical sequestration of production from circulation, of the workplace from the market; they form a single circuit. One form of social confrontation does not simply replace the other, without relation. It is in truth more dramatic when one becomes the other: when the content of labor-based conflict is nonetheless compelled to take the form of circulation struggle.

Consider the remarkable drama that played out this year in “Bloody Harlan County” in Kentucky, once site of the protracted coal war between “gun thugs” in the coal barons’ employ and heroic miners (and their families and comrades), lasting by one measure from 1931-39. Eight decades after its end, a new conflict begins with the coal leviathan Blackjewel LLC declaring bankruptcy and ducking out on weeks of back pay. Wage demands are the very soul of production struggles, of the strike. “I’d like to get paid, get the money that we’ve earned,” summarizes one worker; it’s as simple as that. Except it isn’t, and as of July 2019 he is an ex-worker. Without a liquid firm to strike against, the unemployed miners take the only reasonable step available: they place themselves on the tracks in Harlan and decline to move, preventing the last shipments of Blackjewel coal from making it to market. The scene, captured in a series of interviews, is in its habits and sociology a worker’s movement to its core, with long-time veterans sharing union songs and tales of previous struggles. 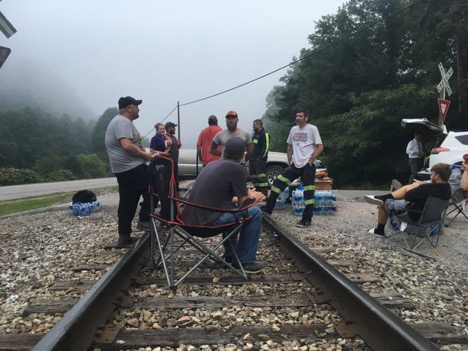 The Trillbilly Workers Party podcast recorded onsite ends with a woman singing Florence Reece’s labor standard “Which Side Are You On?” — composed in Harlan in 1931. As we listen to her sing this in 2019, voice striated with age, we hear decades, centuries of brutal extraction, of labor exploitation and value production and ceaseless resistance, all of it accreted into memories, songs, traditions. The performance dredges up a century of struggles, not just that first coal war but the Brookside Strike that fell at the 1973 breakwater for US labor (chronicled in the great film Harlan County, USA) and a thousand other showdowns with bosses. But the past must change in the present. The form through which these oldest production demands, pay us you motherfuckers, can be rectified in this moment is the blockade, pure circulation struggle. It’s a moment of synthesis. But synthesis is not frozen in time; it always has a direction to it. This is how things are going.

This is not however a simple development. If we peer down the Harlan tracks toward the mine, we can see not just Blackjewel’s profits locked down; we see as well an expression of the desperate need to keep fossil fuels in the ground, at peril of civilization’s end (civilization is neither here nor there; perhaps better to say, at peril of foreclosing the possibility of ean mancipation not yet realized). This is set against the trap in which the miners find themselves, compelled to affirm the existence of the industry that is killing them and us. All social struggle is henceforth bound up with climate collapse. These entanglements will be persistently confounding; movements with which we have sympathy and solidarity may not always align with ecological concerns. Consider the Yellow Vests, along with Hong Kong one of the two early templates for 2019 (though all paradigms are swiftly betrayed). The movement began against a levy on auto fuels proffered by Emmanuel Macron as an ecological measure. That is to say, if one accepts the state’s claims, the Yellow Vests are an anti-green movement. It is the same puzzle, inverted, of Standing Rock in 2015, when indigenous demands for ecological sovereignty in truth opposed capital’s genocidal need for extraction profits — but were instead set against the illusory lure of “job creation” in economically depressed areas. Poverty is thrown into antagonistic relation with climate; this is one of the great snares and confusions of the present.

So then: circulation, labor, transport, climate in a sort of Gordian knot. Just so in Santiago. The video of the burning subway comes relatively early on, the same day that Piñera futilely abandons the fare hike. It is several contradictions at once. After all the metro, public transportation, is one of the few popular features of the capitalist era, even if it is not free, as it obviously should be. Moreover, the metro provides a sort of icon for the world of green policy. It is a salutary and crucial feature of escaping car culture, undoing its colonization of the landscape and its antisolidaristic form, its birth in the violence of extractivism and its endgame in the doom of fossil fuel burn. It is green proletarianism embodied, or so goes the policy doctrine. And — is not the initial goal of the Santiago rioters to be able to ride the subway freely, not to destroy it? What then do we see in this image?

There is a million word answer, and another that is thirteen words long: the foundational and fatal contradictions of our world cannot be resolved within capitalism. We see that as long as the state manages public transportation it will always be a potential weapon of the enemy regardless of the policidaires’ noble intentions, used to burden the poor with the costs of austerity (whether that austerity is “real,” i.e. a response to actual declines in surplus available to the state, or contrived, is in this regard a specious debate). We see a recognition that the wounds opened by modernity on the body politic — being forced to urbanize and then pushed ever further into the peripheries of the city, away from where one must travel so as to work — cannot be plastered over with shitty fixes like this. We see the intensity of negation, ready to burn whatever is to hand if it participates in the spectacle of “the public” without belonging to the people. We see perhaps most of all that, even if the conveyance is relatively cheap and energy efficient, going to work for a boss and a wage is not freedom but misery, eclipsed only by the misery of having no wage at all. We need not settle for that choice, the picture says. Conscious or not, articulated or not, we see a structural fact, and it is a rebuke to the managers of full employment. We see, in short, antiwork politics hot enough to melt steel. And we see that this politics now finds its natural home on the subway platform, at the roundabout, on the high street. Among the things that 2019 has to say, this is surely one of the loudest.

While the eye inclines, for good reason, toward fire, the train fills only a fraction of the picture. The yellow line extends away from us almost to the horizon; caution divides the scene. The platform is empty, as one would expect, except that it cannot be empty: there we are. We are there in the middle of the puzzle. Everyone else has left. Smoke roils upward toward what looks like an opening above. Smoke always looks for an opening. A sign floats suspended in the air to the picture’s upper left. Salida, an arrow pointing left. Exit. There is no question mark — they can never appear in dreams because everything in dreams is a question mark. But that is the question.

This post precedes a more sustained essay surveying the year of planetary unrest forthcoming this spring in Commune magazine.