The following is taken from Lola Okolosie's Foreword to The Heart of the Race: a testimony to the collective experience of black women in Britain, and their relationship to the British state throughout its long history of slavery, empire and colonialism.

History, more often that not, tells us the story of the powerful. It is the details behind their victories that are amplified and given room within the national consciousness to become words like ‘fact’ and ‘truth’. Such objectivity, we know, is merely a form of subterfuge hiding those other stories that could be told of marginalised voices forced into positions of silence and obscurity. Thus to archive such sidelined narratives, collating and giving them a space in which to articulate their lived experiences, is no neutral undertaking. In The Heart of the Race: Black Women’s Lives in Britain, it is the work of a radical feminist politics that seeks to serve and defend the communities of women represented in this groundbreaking book. It is work that wrestles the incredible power invested in memory making for those who, ordinarily, would be cast aside.

The stories of the women captured within cannot be obscured. They cannot be dismissed as insignificant or unknowable. Reading them more than thirty years later, today’s generation of black feminists will be sure to recognise their mothers, grandmothers and aunties, and also, depressingly, ourselves. The struggles succinctly captured in Heart of the Race continue to plague black communities in the twenty-first century. Black Caribbean and mixed white/black Caribbean pupils are three times more likely to face permanent exclusion from school, and it is a credible possibility that three-quarters of young black men aged eighteen to thirty-five have their DNA profiles in the police’s national DNA database. It is a grim, if clear, reflection of the disproportionate rates of not only stop and searches but also arrests of young black people. In 2012, an All-Party Parliamentary Group reported that since the 1980s, unemployment rates among black women have continued to be consistently higher than for their white counterparts. Swingeing cuts, first introduced by the Liberal Democrat and Conservative coalition government will only see such figures rise – nearly half of black women of Caribbean descent and over a third of black African women are employed by the public sector. Black women continue to be more likely to live in poverty, and a disproportionate number have low-paid or insecure employment.

In their chapter on ‘The Uncaring Arm of the State: Black Women, Health and the Welfare Services’, the authors write that ‘legislation designed to protect the NHS from “abuse” by foreigners means that hospitals now record our medical history and our immigration status.’ Three decades later, the current Conservative government is being condemned for forcing ‘NHS doctors to “act as border guards”’ in its ‘crackdown’ against migrants and forced to defend its appalling treatment of the Windrush generation. It was chilling to read, only a few months after the destruction of Grenfell Tower, ‘the cumulated effects of twenty-five years of racist housing policies have ensured that growing numbers of Black women are imprisoned on the upper floors of dilapidated tower blocks in every inner city.’ Currently, most of the children living above the fourth floor of England’s tower blocks are black or Asian.

Thirty years on from its initial reception, ‘black’ as a political identity under which empire’s unaccounted-for children could unite has become hotly contested. Yet the anti-colonial and anti-imperialist sentiments that made such solidarity possible, and which forcefully run through this book, can be seen in the work of activist groups today. The spirit of cogent anger and urgent activism that forms the basis of this book has been reignited, as the battles over equality outlined within it remain with us. It is a text pertinent to now precisely because it charts the ways in which those before us have engineered successes, despite a system of intractable sexism and racism. It teaches that through collective action and being grounded in our communities, we can recover our agency. The myriad black women whose stories have been preserved and passed down to us passionately proclaim their rightful place in Britain’s history. It is on their shoulders that we stand. 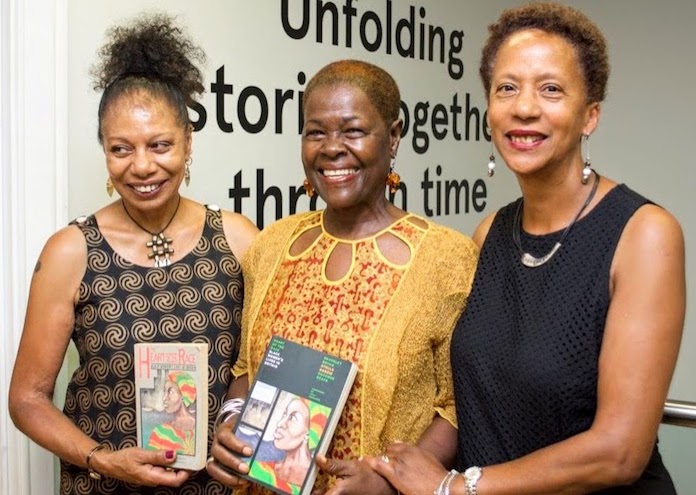 (From left to right) Stella Dadzie, Beverley Bryan and Suzanne Scafe at the relaunch of Heart of the Race at the Black Cultural Archives in Brixton, 27 July 2018.

The above is taken from the Introduction to The Heart of the Race: Black Women’s Lives in Britain by Beverley Bryan, Stella Dadzie, and Suzanne Scafe, a classic work of Black British history reissued in 2018.

The Heart of the Race is a powerful corrective to a version of Britain’s history from which black women have long been excluded. It reclaims and records black women’s place in that history, documenting their day-to-day struggles, their experiences of education, work and health care, and the personal and political struggles they have waged to preserve a sense of identity and community. First published in 1985 and winner of the Martin Luther King Memorial Prize that year, The Heart of the Race is a testimony to the collective experience of black women in Britain, and their relationship to the British state throughout its long history of slavery, empire and colonialism.

This new edition includes a foreword by Lola Okolosie and an interview with the authors, chaired by Heidi Safia Mirza, focusing on the impact of their book since publication and its continuing relevance today