An excerpt from Lavil: Life, Love, and Death in Port-au-Prince

An excerpt from Lavil: Life, Love, and Death in Port-au-Prince, part of the Voice of Witness series of oral history.

Fran is from Bainet in the southeast of Haiti. On the day of the earthquake, Fran was on an upper floor of a government building. We spoke to him in front of a church where a commemoration of the 2010 earthquake was taking place. When the quake hit, Fran was knocked unconscious as a government building collapsed around him. He then walked for miles to report from the quake’s epicenter. As a choir sang inside a church, Fran talked to us about the day of the quake and its aftermath.

All books in the Voice of Witness series are 40% off until Sunday, August 13 at 23:59 PST. Click here to access the discount. 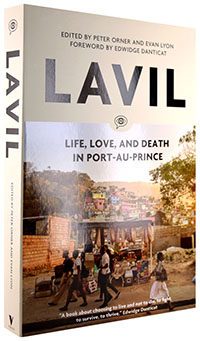 On the day of the earthquake, I was at a government building to pay taxes... I heard the noise, and I thought that it must be a thunderstorm. I was on the fourth floor. I suddenly felt that I was flying. I can’t explain what happened because the next thing I knew, I was in a different part of the building. I don’t now how I jumped or flew, or whatever happened. I was jumping up, and then I quickly lost consciousness.

When I woke up, I heard a lot of yelling and screaming. It was me. I was the one screaming, screaming, screaming, screaming. Yes I was. And then people around me were crying and there was all this smoke. Black smoke, black dust, everywhere. As a journalist I felt that I had to report what happened at this damaged building, but that was impossible. There wasn’t any communication. My cell phone wasn’t working.

My first reflex was to go and find my own children. I left that damaged building and walked to the school to see my children. I have two kids. One girl, one boy. My son is eight and a half. My daughter is seven. When I got there, my kids were scared, but once they saw me they were ne. My house in Port-au-Prince is in the south part of town. In this area there wasn’t any damage because the structural support is very strong. I brought my children home to my wife. I told them that I would be back. They know that as a journalist, I have a passion, a need, to be where the events are happening.

I set out for Léogâne, the epicenter of the earthquake. I didn’t come home for three days. I didn’t realize that distance was so far. I’d always driven there. In a big event like that, you just walk and you don’t feel tired or anything. The only thing I remember is that I had to carry water. I took my water with me, that’s all I remember. I was not the only one walking. There were people all over the streets and everybody was walking for miles.

I knew Léogâne well. I’m a director of a network of journalists that meets periodically in that city. And even before the quake I knew that the houses in Léogâne were slowly sinking into the ground. I once interviewed a geologist, who is well known in Haiti, about this problem and what might happen in a possible earthquake.

When I got there, 70 percent of Léogâne was gone. It wasn’t like in Port-au-Prince, where you could see still some houses standing. I couldn’t call on a cell phone or radio or anything so I just got paper and wrote down what I saw. People were trying to pull friends and relatives from under the rubble. I heard people shouting: “Come and help, come and save me, come and save me.” But because there was nothing to be done to save most of those people, I began crying. They weren’t dead yet. They were under all that rubble. And they were asking us to come and save them, but we didn’t have any tools or materials to pull them out.

You know, in the immediate aftermath, some people didn’t call it an earthquake. They said that an enemy was attacking us. Some said this is the end of the world. There was a Haitian senator who said that there was a bomb, a big bomb that the U.S. was testing, and they dropped it on Haiti. People eventually received information about the earthquake through the telephone companies after the cell networks were repaired. They sent text messages to people saying that an earthquake happened. I didn’t receive messages about where people could get water or where people could get food, but some people said that they received messages like that.

It took Radio Galaxie three months to be able to report news again. After three weeks, we started broadcasting, not giving live radio news, but we were able to put songs on the air.

At this time in the aftermath of the quake, I would give news ashes, or brief reports to foreign journalists, for instance to a reporter I know from Miami. But I wasn’t able to do any local reporting. The little money that I made came from the outside.

Do you think that Bill Clinton has any real desire to help Haiti? He’s dealing with a group of people who don’t have any incentive to change. The reconstruction funds are doled out on the basis of nepotism and nepotism only. Clinton never asks, “Where is the reconstruction?” All those places that Bill Clinton said he’s going to build. None of them happened. You’ve seen the city. Look at some of the bourgeoisie. They’re the only ones who’ve had their houses fixed.

Those who have money get the help, not the poor. In many tent cities, people were given the deadline to leave, but they don’t have the money to move. Clinton never asks why. But I can’t say that on the air. I would be in trouble. I might lose my job. I’m not the owner of the radio station, I’m just a worker. There are certain things you can denounce, but there’s a limit in the denouncing.

What else can I say? I can show the reaction of the people. I can say they give some people 1,400 Haitian dollars, and then they kick them off a property. Where are they going to go now? That is something I can report. But I can’t say that it’s been three years that they said they were going to build, and they still don’t build. I can’t ask, “Where has all the money gone?” I can’t say that. I can say that Clinton and his committee didn’t do the reconstruction they promised, but I cannot say that the bourgeoisie have somehow gotten all the money. If the bourgeoisie hear something like that, they will call the director of the radio station.

What we’re starting to do now is to talk about these problems every day. If there is a fire in the tents or if someone dies for specific reasons, I can take advantage of that moment and say something that I wouldn’t say in normal times. But after that, everybody closes their eyes. That’s the system under which we journalists operate. We try, but we know our limits. Sometimes the radio owner will say, “I don’t want to lose my advertising revenue.”

All books in the Voice of Witness series are 40% off until Sunday, August 13 at 23:59 PST. Click here to access the discount.