This essay by George Ciccariello-Maher was written for arranca! issue #51 (forthcoming), to provide an overview for a German-speaking audience on the dynamics behind Trump's election and the resistance to his presidency. 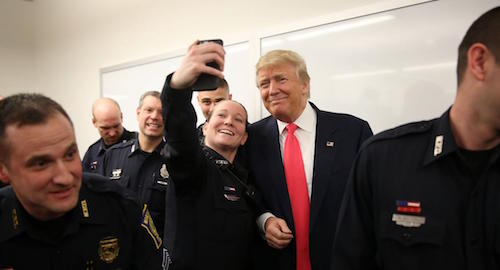 With the election of Trump, the tempo of our collective disaster has shifted dramatically. Rather than the slow-rolling nightmare of Clintonite neoliberalism, for which Obama was more continuity than respite, this nightmare has suddenly shifted into high-gear with each new day bringing — via a string of brutal executive orders — a new hell to ponder, lament, and resist.

How did we get here? The debates are seemingly interminable and inevitably self-serving. The Democratic Party proclaims itself a part of #TheResistance while refusing to recognize its own role as primary cause. Wars in Syria, Libya and beyond, a coup in Honduras, decades of mass incarceration, neoliberal free trade, offshoring, factory closures, and even a border wall pioneered by Bill Clinton himself all testify to the fact that the effects of the Trump election are also its most potent causes. The failure to recognize this is symptomatic of a broader failure to even begin to grasp the nature of our moment and the echo of radical power that the Bernie Sanders candidacy represented. And so the Democrats play ostrich, celebrating the “deep state” and bathing themselves in crass Russophobia, while the word “resistance” rots in their mouths.

On the left, the debate is bitter and has brought underlying tensions to the surface. Some, centering the overt white supremacy of the Trump campaign, have declared the election a purely racial one. While no longer truly on the left, the former Maoist turned Democratic Party shill Van Jones’ description of Trump’s election as “whitelash” has crystallized both this view and its blindspots. Others, grounded in the class-first milieu and often Sanders supporters, instead point to the neoliberal abandonment of precisely those areas that refused to turn out to support Clinton and advocate an urgent re-engagement with the “white working class,” occasionally neglecting the non-white poor.

Unsurprisingly, the reality is instead a dialectical entwinement of the two. Rather than a neat “intersection” of race and class as separable phenomena, these instead manifest as the swirling condensation of their own interplay. The abandonment of the poor by neoliberalism — whites included — has been real, and Republicans and Democrats alike have been complicit. As Mike Davis has shown concretely, many of those counties that flipped from Obama to Trump had seen recent factory closings. When all that is stable melts into thin air, and absent any alternative, it seems less than crazy to opt for what Davis calls the “cargo cult” of Trumpian millenarianism: praying for factories and industrialization with no real hope that they will ever materialize.

But neoliberal abandonment does not operate outside the context of a resurgent white supremacy build steadily and consciously over the decades. In the most important book of 2016, From #BlackLivesMatter to Black Liberation, Keeanga-Yamahtta Taylor diagnoses the decades-long turn toward a colorblind logic in which welfare for the poor has been recast as handouts for the undeserving. Rather than defend racial justice, the Democrats did the opposite: embracing white supremacy and mass incarceration — particularly Bill Clinton’s 1994 Crime Bill, which Hillary actively supported — while abandoning all poor people. It’s little surprise that in white communities, this abandonment would coalesce and harden into a nostalgic white supremacy that is inseparable from Trump’s right-wing populism.

Trump’s success — absolutely incomprehensible for establishment Democrats and Republicans alike — lay in what Davis describes as the “fusion of two anti-establishment Republican insurgencies”: the white nationalist far-Right and radical religious evangelicals. Each has built a powerful apparatus in recent years, from right-wing talk radio and Breitbart — co-founded by Trump advisor Steve Bannon — to economically and politically potent megachurches. Thus while traditional conservatives and the Republican leadership panicked at the prospect of a Trump candidacy — and indeed withheld support from his campaign — it is not accurate to say that he lacked organizational support.

It was this less-visible but more organically rooted organizational apparatus that stepped in to support Trump’s right-populist vision and propel him to the White House. In the process, the white nationalism long present in U.S. politics has been given a dangerous makeover in the so-called “alt-right” (alternative right). While the Trump administration and its alt-right supporters have direct and open links to openly white supremacist and anti-Semitic organizations like the Ku Klux Klan and websites like The Daily Stormer, they nevertheless provide a bi-directional Trojan Horse of sorts.

On the one hand, emerging from online communities like 4chan and the systematic harassment campaign against female video game programmers known as “Gamer Gate,” the alt-right uses ironic racism and misogyny as a gateway for its young, white, male constituents to later embrace the real thing — thousands have been funneled into the waiting hands of a newly empowered neo-Nazi and “traditionalist” movement. That these young, porn-addicted misanthropes are now reclaiming the traditional family — led by VICE Magazine co-founder Gavin McInness under the moniker “proud boys,” who allegedly abstain from masturbation (I remain unconvinced) — is but one of the unsustainable tensions within the alt-right.

On the other hand, by gently disavowing some of the most openly fascistic elements of the racist right, the alt-right provides a politics in which brutal racism and violent misogyny can be both ever-present and plausibly deniable. The symbiotic relationship between the alt-right and traditional conservatives is highly unstable, however. This was clear in the rapid fall of alt-right provocateur Milo Yiannopolous over comments about pedophilia that the conservative base could not stomach. And when white nationalist Richard Spencer — famously humiliated with a well-aimed punch to the face outside Trump’s inauguration — arrived at the conservative conference CPAC, he was quickly shown the door.

However, Clinton lost by a hair and could have “won” in many ways — albeit without reversing or even slowing our terminal slouch toward catastrophe. Her campaign strategy was flawed, yes, but not by accident: Democrats have long courted the cities and neglected the countryside as a point of conscious strategy. She relied on the blind support of Black Americans who have never benefited from her policies — as one quip put it in reference to the 1994 Crime Bill, if she wanted to win, she shouldn’t have mass incarcerated her electoral base.

Like all good jokes, this is more truth than lie. The bill imposed a “three strikes” life sentence for violent felonies, even if the first two were nonviolent drug crimes — under Bill Clinton, the prison population nearly doubled, from 1.3 to 2 million. The incarcerated cannot vote, and to these millions we can add the nearly 6 million disenfranchised by felony convictions and the radical and increasing disenfranchisement of millions more. Since the Supreme Court gutted the 1965 Voting Rights Act — a central piece of civil rights legislation — in 2013, a combination of new voter ID laws and other explicit voter suppression strategies played explicitly to Trump’s advantage, but not without borrowing from the Democrats’ playbook.

Any of these factors could have turned the election in a different direction, and yet none was pure contingency. All are instead a reflection of the slow-moving disaster of recent decades in which both parties have been more than complicit. As Bertolt Brecht put it in the prophetic poem, “When the Fascists Kept Getting Stronger”:

Comrades, do get it into your heads, this ‘lesser evil’ which

Will very soon mean having to stomach the Nazis.

While nothing was guaranteed, there is every reason to believe that the left-populism of Bernie Sanders could have defeated Trump’s right-populism, by robbing him of key voter demographics in swing states. This point is of no small importance, and nor is it merely nostalgia for what could have been: it means that the United States — currently governed by a dangerously fascistic right — could just as easily have elected a self-described socialist.

More important still, this points toward the need for a radical left populism. The possibility of opposites is the nature of any radically polarized historical moment, and this moment is a global one. The “end of history” crowned by the victory of U.S.-centered capitalism and liberal democracy has given way to powerfully dialectical ruptures, conflicts, and a global fight back against neoliberal austerity. But on the other side of this rupture lay an empowered fascistic right that threatens Europe as it threatens the U.S.

The North American Free Trade Agreement (NAFTA) devastated communities both south of the border and north, driving Mexican and Central American migrants into the U.S. where they have served as a convenient pretext for xenophobic backlash. Much the same could be said for the Eurozone. In fact, fully aware of the devastation that NAFTA would inevitably wreak, Bill Clinton began to construct the very border wall in 1995 that would be so central to the Trump campaign more than 20 years later. And the wars unleashed by U.S. and European intervention in the Middle East and North Africa have fueled the overt Islamophobia of Trump’s “Muslim Ban” and the popularity of the anti-immigrant right from Greece’s Golden Dawn to Marine Le Pen and Brexit. Mainstream politicians like Angela Merkel desperately embrace the racist upsurge, only throwing fuel on the fire.

The left — from Europe to the U.S. and beyond — desperately needs to provide a coherent argument that destroys prevailing myths about migrants and an alternative explanation for the concrete reality lived by so many. And it needs to embody a new and different horizon, the possibility of international solidarity and integration that doesn’t come at the expense of the poorest and most vulnerable.

The radical potential amid the wreckage that, following Walter Benjamin, piles around our feet ever more by the day, is manifesting spontaneously in the streets. Trump’s “strategy of tension,” spearheaded by the self-professed “Leninist” of the far right Steve Bannon, has collided with an unexpected mobilization of resistance in the streets. Particularly notable was the rapid mobilization of thousands against the Muslim Ban, an unprecedented gesture that blocked airports nationwide.

This extraordinary show of resistance has mobilized and galvanized disaffected liberals — many of those streaming into airports had never done so before. We must resist the urge to condemn the newly-radicalized: after all, deportation and Islamophobia were present under Obama as they are under Trump. Rather, the task of the present — the task of all radical populism — is to provoke oppositional movements that will eventually draw the masses into resistance against Trump and the Democrats.

The parameters of this resistance are as clear as Trump’s provocative proposals. Endorsed simultaneously by the Fraternal Order of Police and the National Border Patrol Council, Trump represents a looming fascist threat that is both external and internal. As he mobilizes a mass border force to detain, incarcerate, and deport migrants — and to criminalize Muslims — he has also freed the hands of the police to brutalize Black and Brown Americans with impunity.

The tactics and the strategies we must develop and deploy apply to both faces of this reaction: building community-based self-defense movements to detect and resist both the police and ICE (immigration) raids. Only by organizing neighbors to be the eyes and ears of resistance movements — using new technologies to alert one another to ICE raids and police harassment, connecting everyday residents and organizers in the process — can we hope to make their jobs impossible to carry out while building the future in the present.

The Obama Syndrome
by Tariq Ali