"We know that the work for the left now is long and slow and that it requires force and numbers and commitment at a grassroots, community level. We must also recognise that the challenge for the left in 2017 is one of transnational solidarity: figuring out how to join up, link up and learn from global struggles." - Rachel Shabi looks back at a year of many challenges, and what we can do to build solidarity and resistance in 2017.

Of course it wasn’t the worst year, ever. Those bewailing the myriad awfulness of 2016 know history has dealt worse than the year of Brexit and Donald Trump’s election, the year of deadly terror attacks around the world, a desperate refugee crisis and an alarming rise in far-right forces across Europe. Even ignoring swathes of history, recent years have been awful, too: the five since the Arab Uprisings have seen grotesque war in Syria, a deadly assault on Yemen, repression and human rights abuses in Egypt and Bahrain – as well as a harsh crackdown in Turkey, once considered to be a ‘model’ for the region. Egyptian analysts might well say the “worst year ever” was 2013, when a military coup put their authoritarian, Abdel Fatah el-Sisi in charge.

Still, it’s a depressing time, the close of 2016. In Brexit Britain, the referendum vote to leave the EU divided the country while emboldening the far right and the intolerant: racist and homophobic abuse and attacks surged on the streets, along with tabloid-led attacks on the judiciary and the denouncement as “unpatriotic” of those questioning the wisdom – though not the validity – of Brexit. In Trumpian USA, a race-baiting misogynist groper who threatened to “lock up” Hillary Clinton, set up a registry of Muslims, and build a wall along the Mexican border, will be US president. He will bring into the White House a team of people variously espousing or enabling white nationalism, antisemitism, Islamophobia, hostility to immigrants, rejection of workplace rights, climate change denial, opposition to reproductive rights and denial of the Palestinian right to statehood.  And that’s just the highlights.

We like to look for patterns in global news – in itself an inadvisable pursuit. Still, in 2016 it’s easy to see a world in thrall to authoritarianism, a time of strongmen in power mutually admiring and learning from each other: Turkey is tilting towards Russia, which approves far-right movements across Europe, which in turn express admiration for Putin, as does US president-elect Donald Trump. Turkish president Recep Taypp Erdoğan has accelerated a clampdown on the press following a failed military coup over the summer – and also purged thousands of judges, police officers, teachers and government officials. He has consolidated his own power while quashing dissent, much like Russia’s Vladimir Putin, who has stifled the press and civil society while pursuing an aggressive foreign policy. Both men trade on a nationalistic revival while fuelling a fear of terrorism, internal or external enemies. These are the animating forces across Europe and America too. It seems that everywhere we turn, we see a resurgent nativist nationalism hostile to outsiders and dissenters.

There is a geopolitical context to the vulnerability of Western liberal democracy, which supported compliant despots across the Middle East, brought or backed chaotic wars, seemed incapable of tackling terrorism or a spiralling refugee crisis, but at the same time carried out extraordinary renditions and drone strikes. Maybe now, part of the pull of authoritarianism lies in the inconsistencies of Western “liberalism” internationally. After all, if liberal democracies have been comfortable about their own violations, while allying with some of the most repressive regimes in the world, doesn’t this blur the lines? Doesn’t this make it harder to hold liberalism as a higher standard?

Meanwhile, in economic terms, the ascendant populist right ruthlessly exploits and manipulates the fact that the ideal of a cohesive society moving forwards, together, hasn’t been working for some time. A neoliberal economic consensus spanning the political spectrum on both sides of the Atlantic has consigned most, instead, to moving ever-backwards but at different speeds or, at best, working harder and longer to stand in the same spot. The disparity exaggerated by the economic crash, the enormous wealth gaps, the elite few profiting in the midst of a ravaging recession – this is what the populist right has so effectively harnessed.

It has taken some of the left’s core beliefs, wrapped them up in bigotry and sold them more convincingly. Hasn’t the radical left been talking for years about the perils of an unfettered free market, of rampant, greedy “casino” capitalism, of the ravaging and hollowing out of communities in the service of the market? Hasn’t the radical left repeatedly insisted that “trickle-down” economics was a lie – a smokescreen that allowed money to trickle upwards and to the few?

So now here we are: a populist right tide feasting on voters who are witness to vast inequalities, stuck in a stagnant, punishing economy and abandoned by decades of neoliberal economic consensus. While the left in the UK and the US is still reeling, the far right across Europe is rubbing its hands at the prospect of electoral gain. And meanwhile, liberals play catch-up with leftist analysis of capitalism as crisis – as Pankaj Mishra put it in the Guardian, “Many other mainstream periodicals now read like parodies of New Left Review, as they attend belatedly to the failings of global capitalism – most egregiously, its failure to fulfil its own promise of general prosperity.”

The trouble with this belated analysis, though, is the focus tends to be more on “global” than “capitalism”. With a populist right pushing to throw out liberal social values while pretending to be against destructive globalization, we are in urgent need of clarity about the real causes of the current crisis. We know what a credible connected analysis looks like: it came into focus with the anti-capitalist protests that grabbed global headlines beginning in 1999, in Seattle. Miscast as “anti-globalisation”, these protests were part of a chain reaction of mass demonstrations against the IMF and the WTO, the World Bank and Nafta – against unelected Western elites that imposed ravaging economics on nations spanning the global north and south (sound familiar?) The protesters drew from hard-won victories in the Global South, including the Zapatistas popular uprising for land reforms and indigenous rights in Mexico, the Bolivians that successfully fought water privatisation and the landless peasants movement of Brazil – they were all part of the same fight and a part of the inspiration, too. 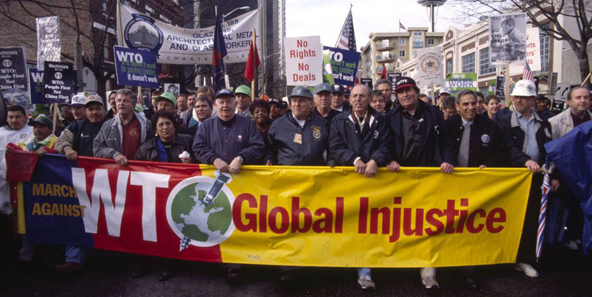 The struggles were unified because the structural adjustment programmes imposed on the Global South, prising open domestic markets and forcing austerity programmes, were precursors to similarly ravaging, free-market fundamentalisms rolled out in Western countries too. The same economic doctrine hurt the same people, in different parts of the world. In fact, this “movement of movements” did not suddenly erupt in the late 90s, but rather, was part of a continuum, a push back against capitalism tied to colonialism spanning centuries. These protests imagined a world that was joined up, but local – sharing knowledge and trading internationally but with robust national democracies that protected local economies and were premised on strong participation. This template continues today: it ran through Occupy Wall Street and now the leading left economists who advocate taking the “orthodox economic theory” (aka neoliberalism) out of globalisation. In politics, it runs through Bernie Sanders in the US, or Corbynism in the UK, as well as Spain’s Podemos or Syriza in Greece.

But while such politics are derided in the mainstream, in 2016, it was the right that emerged as better adapted and, paradoxically, more globally-connected: it seeks nativist nationalism everywhere in what Peter Bloom, lecturer and author of Beyond Power and Resistance, describes as “the rise of the global native”. This is what binds Trump to Brexit to France’s National Front; it is what powers Breitbart in its plan to expand across Europe. You could also say the ones who really learned from the networked, digitally-boosted nature of the Arab uprisings were the far right – now commanding social media, playing its algorithms to full effect.

It would be a mistake to solely focus on economics and underplay the idea that racism is a popular energising force; injustices are interrelated and clearly would not all magically disappear if we had economic equality. We have seen far-right hatred seep into the mainstream in both Brexit and Trump’s victory: race was more of a deciding factor than income level, while people of colour comprise more of the working class than any other class bracket.

Racism and bigotry has been encouraged and sounds louder, but this does not mean swathes of people have suddenly become more bigoted. In the UK, research from Hope not Hate affirms that the proportion of people actively hostile to migration or multiculturalism has remained more or less the same. Kris Dunn, comparative politics lecturer at Leeds University who focuses on authoritarianism as a voter type, says that the number of authoritarians hasn’t grown – it has, however, grown more vocal. Furthermore, according to Dunn, people with authoritarian views are energised by instability, while it sends progressives into quiet despair. “Anxiety is the bread and butter of authoritarians,” he tells me, of a voter type defined by a preference for hierarchy and strongman leadership, a desire for order and a fear of outsiders. He also notes that authoritarians are norm-adherent – which means they thrive when society seems to support their views on, say, migration, but would retreat if that shifted.

We know that the work for the left now is long and slow and that it requires force and numbers and commitment at a grassroots, community level. We must also recognise that the challenge for the left in 2017 is one of transnational solidarity: figuring out how to join up, link up and learn from global struggles. What knowledge can be pooled; how do our struggles unite? What can leftists in America and Europe learn about authoritarianism, anti-racism, challenging failing economics and fighting the manipulation of fear from the global south? We must continue to fight for diversity and equal rights, and at the same time demand economic policies that bring change and can overwhelm the fear and hatred that has filled our air supply. It is possible to come back, even from a bad year – history is testimony to that. Just when you feel like the left is in disarray and all is lost, that is exactly the time to come back fighting.

Rachel Shabi has written extensively on the Israeli-Palestinian conflict and the Middle East. Her award-winning book, Not the Enemy: Israel's Jews from Arab Lands, was published in 2009. She received the International Media Awards Cutting Edge prize in 2013, the Anna Lindh Journalism Award for reporting across cultures in 2011, and was shortlisted for the Orwell Prize the same year. She tweets @rachshabi

The Year in Review: Verso authors reflect on 2016

Verso Blog: 2016 Highlights - A round-up of our most read pieces of the year

Hurrah! Die Marmite ist Alle! Huw Lemmey looks back at 2016, blending memoir and polemic in a hybrid essay that sidesteps the boundaries of genre and received political wisdom

The Rebirth of History
by Alain Badiou

The Journey to Tahrir
Edited by Jeannie Sowers and Chris Toensing