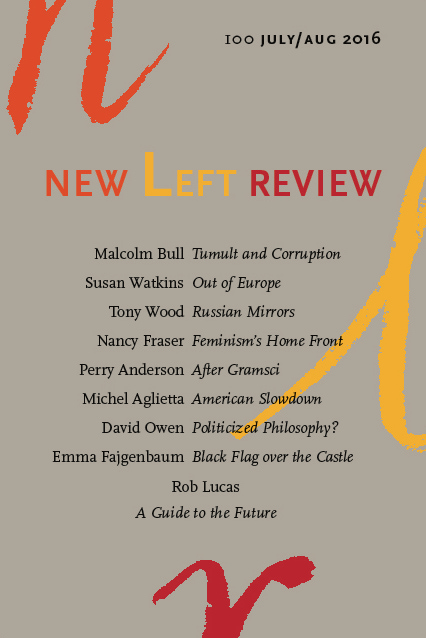 Susan Watkins: Casting Off?
How to assess the latest set-back for the European Union: the vote to leave by its second-largest state? Complex determinants of the Brexit protest—party-political contingencies played out against topographies of class and sub-national disaffection—met by single-minded condemnation of it by the global elite.

Malcolm Bull: Softening Up the State
What advice might Machiavelli offer critics of the contemporary market nation-state? In this striking reconstruction, lessons on corruption, inequality, immigration, mobilization—from Rome and Sparta, Florence and the Venetian Republic—yield proposals for open borders and universal basic income.

Tony Wood: Dark Mirrors
Fine-grained reading of the films of Andrei Zvyagintsev, from the abstract allegories of his earlier work to the unsparing portrayals of contemporary Russia in Elena and Leviathan, exemplary of a new social turn in post-Soviet cinema. Reflections of class polarization and fables of power, with Orthodoxy as its prop.

Nancy Fraser: Contradictions of Capital and Care
Nancy Fraser tracks the reconfiguration of the relations of social reproduction under successive regimes of accumulation—‘separate spheres’, male breadwinner, dual-income household. Are the exactions of financialized capitalism now serving to undermine its lifeworld?

Michel Aglietta: America's Slowdown
Robert Gordon’s panoramic Rise and Fall of American Growth foregrounds exogenous explanations for the fall-off in us economic dynamism since the seventies. Challenging his account, Michel Aglietta explores the role financial rents and shareholder agendas have played in sapping growth—and prospects for a new era of eco-tech innovations.

Rob Lucas on Paul Mason, Postcapitalism
The present crisis interpreted as the stalled transition to a new mode of production, augured by info-tech’s ascent.
Read here.

Emma Fajgenbaum on David Graeber, The Utopia of Rules
Rather than rolling back the state, has neoliberalism diffused it, with workers now administrators of themselves?
Read here.