Hamid Dabashi's forthcoming book, Iran Without Borders, offers a cultural history of Iran which aims to dismantle the dominant narrative of a country torn between a traditionalist ruling regime and a secular urban population. In contrast to this, Dabashi charts the cosmopolitan influences that have been present in Iranian life and culture for many centuries now, and which have helped to forge the Iran we have today. One of the leading representatives of this cosmopolitan Iranian culture was the great filmmaker Abbas Kiarostami, who died on July 4th. 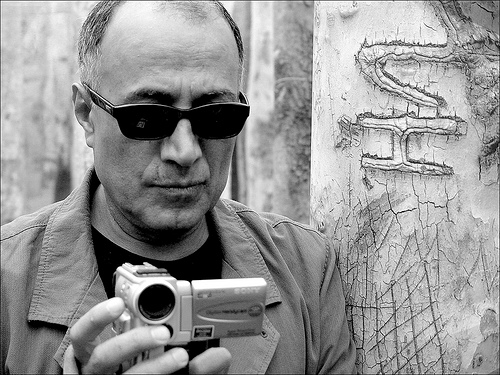 The following is an excerpted passage from my forthcoming book, Iran Without Borders. In this part of the book I expand upon my central argument that the creative formation of postcolonial nations have been decidedly on the site of a transnational public sphere far beyond the current boundaries of the nation-state. Here I connect the exemplary cases of a dramatist named Mirza Aqa Tabeizi early in the nineteenth century to that of the globally celebrated Iranian filmmaker Abbas Kiarostami early in twenty-first by way of showing the expanded trajectory of that transnational public sphere.  The case of Kiarostami's directing Mozart's Cosi Fan Tutte in Europe, long after he had won the coveted Palm d'Dor for his Taste of Cherry in 1997 and at a time of severe political demarcations of "the East and West" here offers a poignant example of my central argument. Kiarostami is widely known and celebrated for his extraordinary achievements as an Iranian filmmaker who added a whole new chapter to world cinema. Less known is the fact that he was also an equally accomplished photographer, painter, poet, and video installation artist, or that he was also invited to direct a Mozart opera! 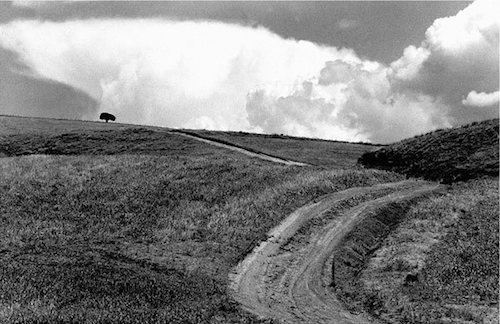 - Roads 44 by Abbas Kiarostami, taken from the Roads Series.

There is a long distance—in time and manner—between Mirza Aqa Tabrizi late in the Nineteenth and Abbas Kiarostami late in the Twentieth century, but the collected confidence and creative audacity of contemporary Iranian artists on the global stage today is the unfolding legacy of those distant memories.  The distance between Mirza Aqa Tabrizi’s earliest experiments with stage and Abbas Kiarostami’s later, mature, and confident turn from Iranian cinema to European opera marks the layered expansion of Iranian literary and visual public sphere in this critical span of time.

There was nothing strange or surprising when the leading Iranian filmmaker Abbas Kiarostami was invited to direct a new production of Mozart’s Così fan tutte (1790)at the Aix Festival in their summer 2008 season.  As one observer put it on this occasion:  “In 1940, the Bolshoi Theatre in Moscow invited Sergei Eisenstein to stage Richard Wagner's Die Walkure. Since then, Ingmar Bergman, Andrei Tarkovsky, Baz Luhrmann, Luchino Visconti, Roman Polanski, Francis Ford Coppola, William Friedkin and Woody Allen have all turned their considerable talents to opera. Later this month, Anthony Minghella's Madame Butterfly will return to London after a successful spell in New York. The Chinese film director Zhang Yimou will stage a production of the opera Turandot at the Bird's Nest Olympic Stadium in Beijing this autumn.”[1]   By 2008 the idea had in fact become a commonplace, and the news that a leading Iranian filmmaker would try his or her hand on a different but related medium had become quite intriguing.  The idea though did have its share of skeptic optimism:

Importing celebrated cinema directors is one of the riskier tactics favored by opera managements today.  Although it generates plenty of initial press and audience interest, the odds on solid success are long, not least because the process of rehearsing singers and collaborating with conductors is so different from working behind a camera.  Yet I can see that the prospect of Abbas Kiarostami's take on Così fan tutte would be intriguing. The films of this Iranian master are illuminated by qualities that could be described as Mozartian - an interest in human foible, a subtle and elliptical grace, a visual sensibility (he trained as an artist and practices as a stills photographer) marked by clarity and understatement.[2]

From staging, production, and performance perspective the proposition might still be considered quite curious:  “Kiarostami admits,” Rupert Christiansen reported on this case, “that he knew virtually nothing about opera when he took on this project. He had never seen Così; he auditioned none of the cast. This absence of baggage and preconception means he doesn't feel impelled to strive for originality, and more experienced opera-goers might find his approach almost naïve in its trust in the text, its use of period costume, its eschewal of gags or gimmicks.”

The production had also its share of political controversy, for when the opera was to be staged in London, the British embassy in Tehran had refused Kiarostami a visa, leading one British critic to object:  “ENO’s [English National Opera's] new Così fan tutte hit the headlines . . . some time before it opened, owing to our Teheran Embassy’s inability to provide director Abbas Kiarostami with a visa. After interminable wrangling, an exasperated Kiarostami, eventually pulled out; he entrusted work in London, the production having been premiered last year at the Festival d’Aix en Provence, to his deputy, Elaine Tyler-Hall.”[3]  The whole production thus became a textbook example of the globalized condition of the politics that at once enabled and compromised artistic production.

Kiarostami’s production of Mozart’s opera, however, had gone ahead and produced some enthusiastic responses.  Bianca Bonomi tried to find a cinematic affinity between Kiarostami and opera he was directing:  “He also recognized that the theatrical intimacy of the opera, which revolves around the dealings of six main characters, was not dissimilar to the intimacy promoted in much of his screen work. Such works include The Wind Will Carry Us, the story of a city engineer who journeys to rural Iran and discovers new social values; Ten, which details a female driver's conversations with passengers, and A Taste of Cherry, a contemplative tale of a middle-aged man who has resolved to commit suicide for which Kiarostami won the Palme d’Or at Cannes in 1997.”

The key historic moment however was for an Iranian filmmaker to try his hand with an iconic operatic production in heart of Europe, almost a century and a half after Mirza Aqa Tabrizi had first tried to introduce European theatrical heritage onto Iranian stage.  The fact that Kiarostami was at home with Mozart in Europe speaks to a common creative ground beyond the ethnic territorialization of the nation-state. For Sergei Eisenstein to stage Richard Wagner's Die Walkure, or Ingmar Bergman, Andrei Tarkovsky, Baz Luhrmann, Luchino Visconti, Roman Polanski, Francis Ford Coppola, William Friedkin, Woody Allen, Anthony Minghella, Zhang Yimou stage any number of other operas had now been put on the same playing ground as Kiarostami’s directing a Mozart on stage.  What we were thus witnessing, from Mirza Aqa Tabrizi to Abbas Kiarostami, is the epistemic and aesthetic indeterminacy of worlds that were meant to confine but had in fact liberated them.

Iran Without Borders is released in August from Verso Books. 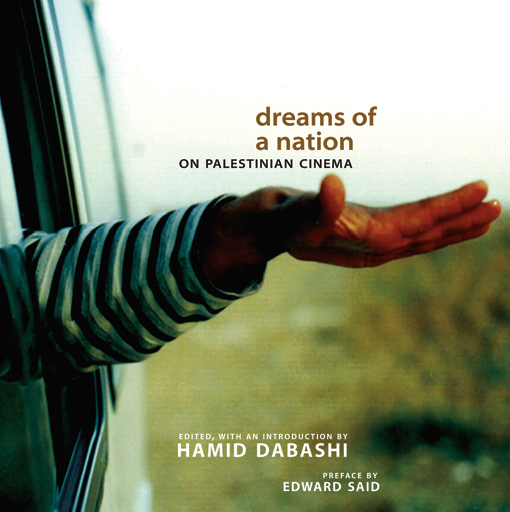 Dreams of a Nation
Edited by Hamid Dabashi 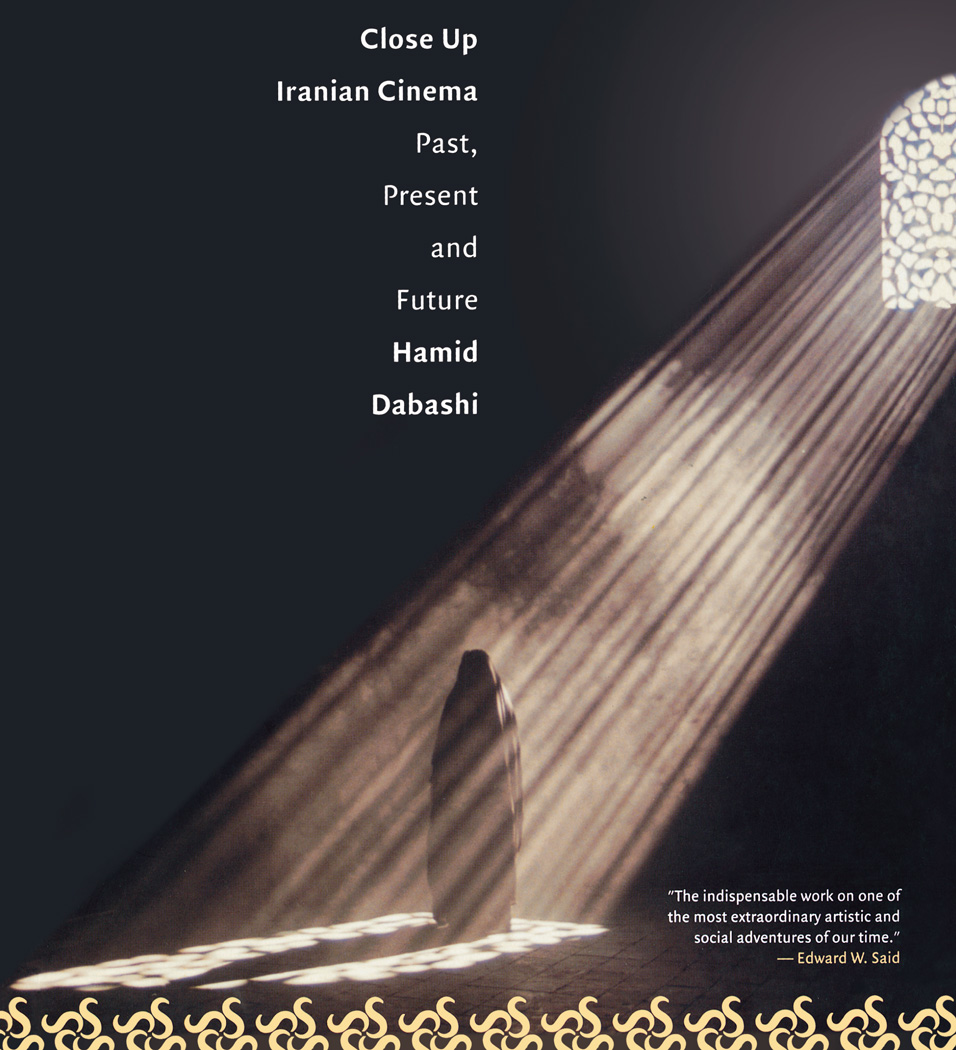 Close Up
by Hamid Dabashi

Film After Film
by J. Hoberman

Iran Without Borders
by Hamid Dabashi