Walter Benjamin, The Storyteller: The Verso podcast in collaboration with the London Review Bookshop

The novellas, fables, histories, aphorisms, parables and riddles in this collection illuminate the themes that defined Benjamin’s work.

In the latest Verso podcast in collaboration with the London Review Bookshop, Esther Leslie, Marina Warner and Michael Rosen join Gareth Evans to discuss his experimentation with form and media, his concept of storytelling and the communicability of experience, and the themes that run throughout Benjamin’s creative and critical writing.


‘The Storyteller: Walter Benjamin and the Magnetic Play of Words’—An edited excerpt from the editors’ introduction to The Storyteller

Throughout his life, Walter Benjamin experimented with a variety of literary forms. Novellas and short stories, fables and parables as well as jokes, riddles and rhymes all sit alongside his well-known critical writings. He also long harboured plans to write crime fiction. There exists an extensive outline for a novel, to be titled La Chasse aux mensonge, detailing ten possible chapters, including such details as an accident in a lift shaft, an umbrella as clue, action in a cardboard-making factory, a man who hides his banknotes inside his books and loses them. The sheer variety of Benjamin’s literary texts reflects the often precarious existence that he forged as a freelance author, moving around the continent sporadically taking on assignments for newspapers and journals. The short forms collected in the present volume stand in their own right as works of experimental writing, but they also act as the sounding board for ideas that feed back into Benjamin’s critical work. The Tsarist clerk Shuvalkin and the Hasidic beggar in ‘Four Stories’ (c. 1933–4), for example, resurface in his essay on Franz Kafka (1934). Likewise, the Imperial panorama from ‘The Second Self’ (c. 1930–3) recalls the ‘Tour of German Inflation’ described in One Way Street (1928) as well as the essay on ‘The Work of Art in the Age of Its Technological Reproducibility’ (1934–5) and the autobiographical vignettes laid out in Berlin Childhood around 1900 (1932–8).

Charting these continuities is more than a mere exercise in philology. Rather, the purpose of bringing together these texts is to demonstrate how Benjamin formally stages, enacts and performs certain concerns that he develops elsewhere in a more academic register. Consistent across the work is an exploration of such themes as dream and fantasy, travel and estrangement, play and pedagogy. Before commenting directly on the specifics of this topology, however, a discussion of Benjamin’s reflections on storytelling is warranted.

Benjamin treated the theme of storytelling in an array of texts, not least among them ‘The Storyteller’ (1936), an essay on the Russian novelist Nikolai Leskov from which the title of the present volume is drawn. In another, a short text titled ‘Experience and Poverty’ (1933), Benjamin lays out the central claim he would later develop in the Leskov essay. Before the onset of the First World War, we are told, experience was passed down through the generations in the form of folklore and fairy tales. To illustrate this claim, Benjamin relates a fable about a father who taught his sons the merits of hard work by fooling them into thinking that there was buried treasure in the vineyard by the house. The turning of soil in the vain search for gold results in the discovery of a real treasure: a wonderful crop of fruit. With the war came the severing of ‘the red thread of experience’ which had connected previous generations, as Benjamin puts it in ‘Sketched into Mobile Dust’. The ‘fragile human body’that emerged from the trenches was mute, unable to narrate the ‘forcefield of destructive torrents and explosions’ that had engulfed it. Communicability was unsettled. It was as if the good and bountiful soil of the fable had become the sticky and destructive mud of the trenches, which would bear no fruit but only moulder as a graveyard. ‘Where do you hear words from the dying that last and that pass from one generation to the next like a precious ring?’ Benjamin asks.

By contrast, the journalistic jargon of the newspaper is the highest expression of experiential poverty – a lesson that Benjamin learned from Karl Kraus. As Benjamin comments, ‘every morning brings us the news of the globe and yet we are poor in noteworthy stories.’ But it is precisely for this very reason that seemingly redundant narrative forms become highly charged. Benjamin’s association of experience with folklore and fairy tales cannot be seen as expressing a nostalgic yearning to revive a ruined tradition. Rather, the obsolescence of these forms becomes the condition of their critical function – a point that Benjamin explores in the review ‘Colonial Pedagogy’ with reference to the attempted modernisation of fairy tales. Kafka’s parables elude interpretation because the key to understanding them has been lost, yet the function of this anachronistic opacity is the unfolding of a language of gestures and names: a facet of what has been described as Kafka’s ‘inverse messianism’. By the same token, it would appear that the moment for reading Baudelaire’s lyric poetry had passed at the time of its publication, yet it is precisely the untimeliness of its presentation that imbues Baudelaire’s rendition of modern life with the urgency that Benjamin admired. What Benjamin attempts to re-imagine in his engagement with these authors is the communicability of experience in spite of itself. In this regard, it is notable that a common trait of Benjamin’s own fiction is the layering of voices in imitation of an ostensibly antiquated oral tradition: a sea captain tells a passenger a yarn, a friend tells another friend a curious thing that he experienced, a man tells the tale of an acquaintance to another man, who in turn relates the story to us. These stories create layered worlds of citations, enigmas and perspectives. With this, Benjamin extends a long tradition of recording and retelling stories which stretches from Hebel to Hoffmann and beyond. Here experience finds new ground.

Might it be said, then, that Benjamin is attempting to reactivate the orality of storytelling under new conditions? If so, then what kinds of stories do the trenches demand? What writing speaks to the moment? What follows divides Benjamin’s literary output into three sections: dreamworlds, travel, and play and pedagogy. Included are a number of reviews which address the themes in each section, focussing the material through a form that Benjamin pushes in extraordinary directions, to the point where it might undo itself.

The first section of the volume clusters around dreamworlds. Presented here are Benjamin’s own transcribed dreams alongside some of his earliest writings. These early works of fantasy offer visions of a ‘world without pain’ much as his night dreams mirror and exaggerate the pains of this world. The section on travel is divided into stories of transit through landscapes and seascapes, towns and cities. We see the lonely traveller and also the wanderer who gleans experiences from strange encounters in order to convey them back to an audience, just as in ‘The Storyteller’ the journeyman turned master conveys wisdom in the workshop. Focussed here, too, are the erotic tensions of modern city life, a theme Benjamin explored since his earliest writings. The third section presents play and pedagogy as two intertwined aspects in Benjamin’s thinking. Several pieces explore the play of words, as if – to invoke a phrase from Benjamin’s review of Franz Hessel’s Secret Berlin – ‘words become magnets, which irresistibly attract other words’. To learn from and encourage children’s delight at wordplay is axiomatic in Benjamin’s thinking. In this section is a story titled ‘The Lucky Hand’, which features play in the guise of gambling. Is this a modern morality tale? Perhaps Benjamin wishes to convey lessons about instinct and intuition, about the sort of mimetic knowledge possessed by the body? Likewise, ‘On the Minute’ plays on the idea of learning how to interact with new technologies, specifically radio, another medium in which Benjamin honed his ability to engage audiences through oral presentation.

The Origin of German Tragic Drama
by Walter Benjamin 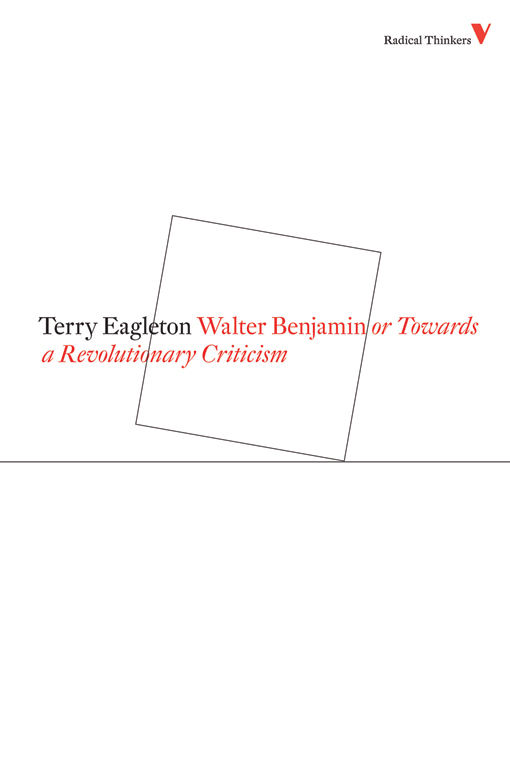