Jacques Rancière and Étienne Balibar: Solidarity with the Tolbiac Occupation

Jacques Rancière and Étienne Balibar expressed their solidarity with students protesting Hollande's labour reforms. The students have occupied the Tolbiac Faculty of the Pantheon-Sorbonne University since 22nd March. Workers, Students, High-Schoolers, Intellectuals – All Together!

A convergence of struggles, and a meeting of minds as well. Such was the dual constellation shining over Wednesday night’s meeting at the Tolbiac Faculty [in Paris, occupied by students since 22 March].

Two of the messages that were read out particularly caught the attention of the packed-out auditorium: those sent by Jacques Rancière and Étienne Balibar. 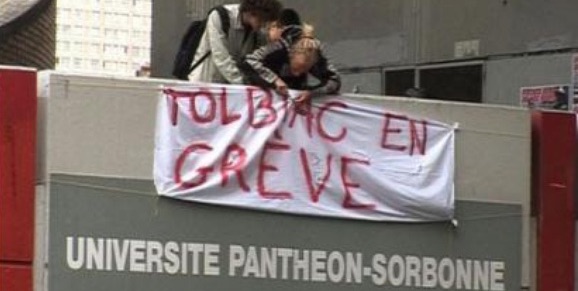 ‘Dear friends, I couldn’t be with you this evening, but I would like to express my solidarity with you in this struggle. This fight does not only have to do with the measures in a legislative text or its practical consequences. A law is more than a list of rules: it is a way of constructing a common world. Those who govern us don’t just want labour to be cheaper. They want it to stop being what it has been for almost two centuries: a shared world of experience and struggle, and the feeling of a common power. They want there to be nothing facing the powers of domination other than individuals each handling their own human capital. From one law to the next, they have tried to produce not only instruments of power, but resignation – the feeling that it’s pointless to fight, and that the world we’re subjected to is the one we deserve. This evening my thoughts are with those who have decided to show that they deserve a different world’.

‘Sadly I can’t attend your meeting discussing and preparing the 31 March day of action, which I hope will be a success, but I want to send you a message in solidarity. I do so as an academic and intellectual who’s been engaged in politics ever since I was a student – not in order to give you advice, but in order to bear witness to how each generation has taken over from the last. The El Khomri bill [the ‘Labour Law’] threatens to roll back fundamentally important past victories with respect to the right to work. And it does so without offering the slightest guarantee that it will serve to reduce unemployment. This is a calamity that is today hitting youth hard (particularly those from deprived regions and districts), feeding a hopelessness that is pregnant with all sorts of dangers. On the contrary, this law will increase social insecurity and the precarity of existence. Prepared through hidden negotiations with the bosses, it has done nothing to take account of either sociological studies, official reports, or parliamentarians’ views. It is a denial of democracy, at the same time as being a factor for social regression.  And to this picture we can add the different forms of prohibiting the freedom to meet and demonstrate – using the state of emergency as a pretext – as well as a police violence that brings back dark memories. So what we need is a mass, considered, responsible but also resolute mobilisation. I am happy to see that this is indeed taking shape, and I send you my best wishes’.

Originally published in Révolution Permanente and translated by David Broder.

Staging the People
by Jacques Rancière

Politics and the Other Scene
by Etienne Balibar