Cihan Tuğal’s recent book The Fall of the Turkish Model argued that the root of recent authoritarian turn is not simply in Erdogan's own authoritarianism but is deeply embedded in Turkey’s  peculiar form of Islamic liberalism. He believes that the Turkish problem arises from the marriage of neoliberalism and democracy that formed the basis of the AKP's ascendancy.

Recently, Tuğal has published articles in the Guardian and on Open Democracy, which have been summarised here. The first article, originally published in The Guardian, looks at how the AKP has manipulated public sympathy and antipathy towards the mass migration of Syrian refugees, and Europe’s role within this exploitation:

“Today, Europe’s best bet against the mounting crisis seems to be to deploy the new regime in Turkey, the ruling Justice and Development party (AKP), with its mutating mixture of extreme nationalism, conservative religion, and militarisation. A harsh crackdown on refugees within Turkey began in October and has continued unabated. As one lawyer put it, Europe has “outsourced its border security to Turkey”. 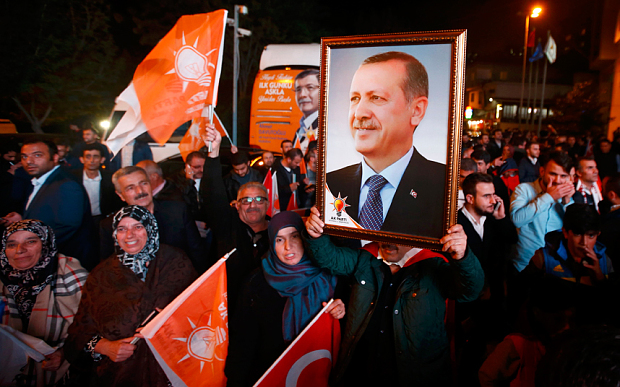 The EU is now offering €3bn, along with a “visa-free travel” promise to Turkish citizens, and even the resumption of membership talks in return for the “globalisation” of Turkey’s police state techniques, which will be used not just against internal opposition, but whomever is perceived to be a threat to Europe’s stability. No critical analyst ever believed that the major reason why Turkey was not accepted into the EU was “lack of democracy”. This is now confirmed by the EU’s actions. The underlying logic was the protection of Fortress Europe.”

As the proximity of Turkey’s neighbours to the EU draws ever closer, and the fortress is penetrated, the argument of “I can’t imagine the EU being neighbours with Iran” – an argument once used to refute Turkey joining the EU - becomes immaterial. As Tuğal indicates, Iran and Europe are not “neighbours in the geopolitical sense, but everyday, tangible neighbours”; fortress Europe is exposed. Querying the morality and impact of engaging with Turkey on these terms, Tuğal quotes President Erdoğan’s public threats that “the EU will be confronted with more than a dead boy on the shores of Turkey. There will be 10,000 or 15,000”. Whilst the Turkish have won PR points by taking in Syrian refugees, Erdoğan’s threats evidences a malevolence that seeks to exploit and use the refugee crisis for his own political gains. His rhetoric stands in contrast with the lived realities of Syrian refugees in Turkey:

“Putting all the burden on the shoulders of Turkey seems a desirable option, but it is not viable, let alone fair. Turkey is already home to around 2.5 million Syrian refugees. The government is holding them as bargaining chips in its many negotiations with Europe. These people are not on any dignified path to citizenship. With Europe’s new deal, citizenship is rendered even more unlikely: since Europe does not want them within its borders, and as the “visa-free travel” promise (if kept) would allow all Turkish citizens to freely circulate within the Schengen area (by 2018 the latest), their naturalisation could not be tolerated (unless European authorities devise cumbersome and disingenuous policies that would exclude Turkish citizens of refugee origin from the visa agreement).

The increasing presence of Syrians has already had a corrosive impact on Turkish society. En route to Europe they have helped to bring out the best and the worst in the Turks (across the secular-religious divide), where abusive employment of informal labour and racist rhetoric coexists with social activism and expansive charitable organisation seeking to mitigate the Syrians’ woes. The unwelcome spread of the refugees has further polarised an already polarised society. The same is bound to happen with greater intensity in Europe, which will not be able to escape further ideological and economic polarisation for decades to come.”

Visit the Guardian to read the article in full. 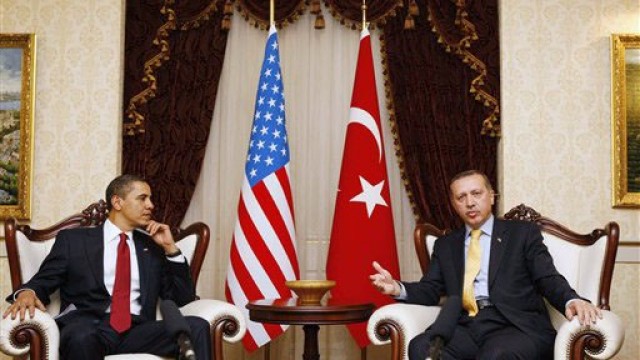 Tuğal's article on Open Democracy examines the US's relationship with Erdogan’s turkey, questioning the hypocrisy of their collusion with the AKP, and exploring the political lineage that the AKP is a part of.

“Perhaps because Turkey is an American ally, the hypocrisy is natural. But take one look at America’s mainstream press, and the reality is clearly far more complex. In November 2015, the New York Times magazine ran a gushing feature, “A dream of utopia in ISIS’ backyard”, which set out western Kurdistan as the only fulfilment of the Arab Spring’s dreams of autonomy and gender equality. Pictures of women fighting for Rojava filled the pages of the magazine, echoing the frequent mainstream media fascination with female guerillas ever since the rise of ISIS.

Autonomy in western Kurdistan has been built by the Turkish regime’s biggest enemy, the Kurdish guerrilla movement PKK and its Syrian and other affiliates. At any place during the last 50 years, such enthusiastic support for the Turkish state’s armed rivals would be unthinkable anywhere near the American mainstream. Today, forces within that mainstream are trying to push American diplomacy in a more pro-Kurdish direction.

The official American silence regarding Turkish brutalities in northern Kurdistan is not only the result of hypocrisy (a given), but also confusion.

As the Kurds remain the only effective ground force fighting ISIS, and the Turkish regime keeps shifting in a fascistic direction, liberal-conservative America is completely confounded over who its real, long-term allies in the region are. (The melding of confusion and hypocrisy reached another peak when the whole western world roared against Turkey’s shelling of Syria’s Kurds, while even the liberal press was silent as Turkey butchered its own Kurds only a few days ago). This is not simply a difficulty of the moment. Structurally, emergent Middle Eastern dynamics have dynamited Pax Americana and the values it stands for. Neither liberalism nor peaceful conservatism are viable options for the region anymore. The whole Middle East is sliding towards varieties of extreme, violent conservatism or fascism – a word I use with care.”

Tuğal goes on to compare and contrast other forms of right-wing dictatorship with the AKP. Showing that Erdoğan’s turn to authoritarianism – which has been compared to the rise of Louis-Napoleon Bonaparte - in fact, parallels 20th Century European fascism. Indicative in the cultish treatment of the AKP leader and the infiltration of civic networks; including newspapers, debate circles, Qur’an courses, dormitories; the liquidation of Islamic populists and mobilising of radical Islamists; the remobilising of the paramilitary Grey Wolves group and consorting with the mafia. Likewise, the AKP’s formation responds to the unravelling of global neoliberalism, in much the same way that fascism responded to global liberalism. After offering this overview of the ideological makeup of the AKP, Tuğal considers the AKP’s intersection with the formation of ISIS:

“The making of Turkey’s new regime intersects with the rise of ISIS. I want to further highlight the three-way intersection that exists between intensifying global Salafi-jihadism, the Turkish regime, and the mass mobilization I have just described.

Turkey has become a breeding ground for ISIS. In two massive explosions in July and October 2015, ISIS massacred a total of 136 people. As importantly, in the second of these explosions, the police tear-gassed the survivors and blocked ambulances. And perhaps more significantly, football fans at a national game booed the moment of silence held for the victims. The international press did not pay much attention, until other Turkish football fans booed the Paris victims in November. During both games, the moment of silence was interrupted by not only boos, but Islamist slogans as well.

What does this show? The recent authoritarian turn in Turkey goes far beyond mere regime change. It signals mass mobilisation in favour of radical-right ideas.”

Tuğal concludes by diagnosing this right-wing radicalisation, considering why it began and what “the neoliberal actors” can do to salvage the situation.

“I advance an alternative explanation: liberalising capitalism multiplies points of tension (unlike especially non-fascist forms of corporatism, which are designed to contain them). Only a few countries are strong enough to repress or absorb the tensions created by liberalism. I argue that quite generalizable mechanisms, rather than Erdoğan’s personality or Turkish culture, are at the root of Turkey’s recent descent into authoritarian totalitarianism. […]

Its exclusion (now carried out publicly and with pride) expanded from Alevis, striking workers, environmentalists, and socialists to liberals and the Gülen Community (a liberal Islamic group). There are certain conjunctural reasons for this. For the Gülen community, for instance, the primary problem turned out to be Israel. There were struggles between the Gülen community and old Islamist cadres regarding how to share the spoils of power. This never got out of hand until Erdoğan’s relations with Israel grew tense. After that point, the two components of the old AKP regime gradually split.

But there is also a broader dynamic at play here. Liberal democracy always suppresses its enemies (one need only look to America’s Red Scare). In the advanced world, liberal democracy can live with such exceptions. But in ‘emerging markets’ there are too many enemies to repress, and the McCarthyism sooner or later runs loose. […]

What is clear, in light of the Turkish case, is that liberalisation and democratisation cannot go hand-in-hand for an extended period of time in structurally weaker societies. While the spoils of a semi-productive model could satisfy many social groups, the downturn of the world economy after 2008 gradually dynamited the cash basis of the AKP’s consent. In this new global scene, the party had to incorporate more and more Islamist cadres to retain a mobilised base, but these very cadres pushed the regime into a collision with Israel, the liberal intelligentsia, and various (local and foreign) capitalist interests.

Under increasing pressures from the emboldened cadres (and the opening granted by the Arab Spring), the party’s hardly contained imperial ambitions were bolstered further and eventually ran out of control. Becoming more Islamist first seemed to be a wonderful resolution to the problems created by slowing economic growth, but this political choice backfired. […]

The neoliberal actors could save Turkey’s post-1980 direction only through merging with their former enemies. The Islamists inherited these lethargic actors’ overall package and modified it through radical policies and discourses. And the results are gradually turning out to be almost as fatal as Italian fascism for their erstwhile benefactors.”

Visit Open Democracy to read the article in full.