Protesting in France could land you in prison

The right to demonstrate is non-negotiable. But in towns and cities across France, society is being reordered in a way that criminalises social and political struggles. 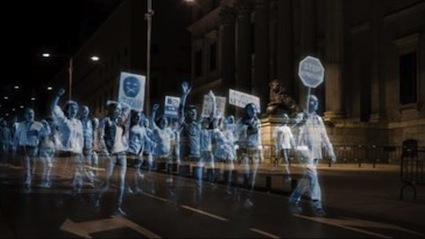 In Madrid, the opponents of the new Internal Security Act organized a demonstration of holograms in the Spanish Parliament.


There is a very strange atmosphere spreading across the country at the moment. Whatever we might think of the dubious leadership of the mass demonstration through the streets of Paris on 11 January after the attacks on Charlie Hebdo and the Hyper Cacher kosher supermarket, this was a case of four million people choosing to march in order to demonstrate their repudiation of the attacks and their attachment to a certain set of democratic values. As press correspondents from around the world noted, the French chose to express their feelings by way of a ‘demo’ – in a sense, this country’s paradigmatic form of collective expression. Hollande and his government played the cards of both emotion and responsibility, while presenting themselves as the champions of freedom of expression.

But today, after the historic march – just like before it – demonstrating is not a universal model. Far from it. There are areas and towns where demonstrating can mean being locked up.

In Notre-Dame-des-Landes, Sivens, Nantes, Lyon or Toulouse not every day is 11 January. You can demonstrate, yes, but not to salute the memory of Rémi Fraisse, the young environmentalist activist killed by a military-police grenade on the night of 25-26 October. Demonstrate, yes, but not against the series of acts of police violence subsequently committed during a number of banned protests at police headquarters. Demonstrate, yes, but not against the ban on demonstrating. These bans, which have spread across France, are a serious – revolting – attack on a fundamental democratic right. In November there were a lot of people who didn’t accept the obscene police diktats and the prefecture’s decrees. Dozens of people were arrested, remanded in custody, brought before the courts and often even sentenced. Some of them got a suspended sentence and a fine; others were jailed. Take the example of Gaëtan, an art student at Le Mirail in Toulouse who is also a political and union activist, who was arrested at the banned demonstration on 8 November. In the first trial he got away with a suspended prison sentence and a fine. Upon appeal the judge chose to pass a harsher six-month sentence, including two months in jail.

Of course, official justice is always able to find reasons to transform political resistance into a common crime, inventing charges and getting its own police officers to testify. And it pays them back for it – it lets them off their ‘mistakes’. It shows its clemency toward the killers of Malik, Zyed or Bouna (well, we’ll know the verdict in May), who are never jailed, while it has no leniency for those who demand the basic right to voice their opposition to society such as it is now organised, or the policies that are currently being implemented.

What is emerging and hardening at the local level is a society built on the criminalisation of social and political struggles, starting with demonstrations and picket lines – and we might fear that if we’re not on our guard, this will become common across the whole country.

Today in Toulouse – a kind of test-bed in this regard – they hem in even the smallest mobilisation with the slightest political, feminist, anti-racist or pro-Palestine coloration (if it is not banned outright) as if the smallest act of public activism carried the seeds of ‘terrorism’.

In his message supporting Gaëtan, Erri de Luca emphasised that ‘the right to demonstrate is non-negotiable’. And he knows something about that. ‘No jail for Gaëtan or anyone sentenced for demonstrating’ – that’s the name of the current campaign against all these attacks on basic democratic freedoms, which some people would have us consider the new normal. We want to identify ourselves with this protest, and express our solidarity with him and all the other people sentenced after demonstrations against police violence. We call on all people of good conscience to think about the seriousness of the current situation.

This was originally published in French in Libération April 17th.

Identity and Difference
by Etienne Balibar