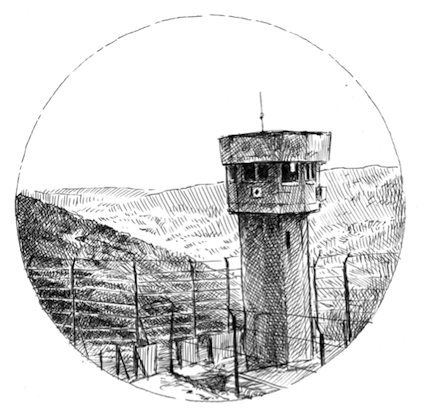 Guard tower at Damun Prison, Israel near Haifa. the facilities were once used as a tobacco warehouse during the British Mandate, but they were converted to a prison by Israel in 1953. It houses up to 500 prisoners.


" December 11, 1984, was a cold, snowy night. I was home asleep, and suddenly soldiers swarmed in. I was cuffed and put in a vehicle with some other boys from my group that had already been arrested. that night they picked up me and four of my friends, and we were driven to Al Muskubiya .(1)

When we got to the interrogation center, it was very chaotic. There were maybe forty guys in all who had been arrested and brought to Al-Muskubiya that night. For the five of us, they took off all of our clothes, stripped us naked. Then they tightened our handcuffs, took us outside in an open area, and put bags on our heads. The snow was coming down, and we were naked out there. I couldn’t see the others, but I could hear their teeth chattering, and the sound of the handcuffs shaking was so loud. The cold weather still bothers me now—it makes me remember that night. This is where we stayed for forty-five days between interrogations. Our bodies turned blue, we were out in the cold so long.

My interrogation lasted two months. During the interrogations, they beat me, and there was loud music playing the whole time. We were allowed to go to the bathroom just once a day. They would tie our hands to the pipes. it was really painful for me. After some time, I stopped feeling my arms—sometimes I didn’t know if I still had them or if they had been amputated. there was constant beating, all over my body, to the point where my skin would be as black as my jacket. If I lost consciousness, they would throw water on me or slap me so I’d wake up.

This mark on my wrist is actually from the handcuffs during that time in prison. The handcuffs were so tight, they cut to the bone. I still have marks on my legs from the beatings. They wouldn’t give us any medical treatment. And the interrogators wouldn’t ask you direct, obvious questions. They would just keep saying, “What did you do? What did you do? What did you do?” and that was it. With all the beating, I couldn’t focus anymore, even if I was conscious. I couldn’t remember anything that I did from the time before prison, even if I had anything to confess. Most of the other kids told the police what they’d done—they made some Molotov cocktails and tested them out. I didn’t tell them anything. Not because I was being secretive, but because I was too confused and disoriented from the beatings. It was a very hostile environment.

Sometimes they would keep me awake for many days straight before they gave me four hours of sleep. And with the pressure of sleep deprivation, I started hallucinating, and i didn’t actually know what was happening around me. I would imagine I was in a kindergarten and there were a lot of crying kids causing all this chaos, but I couldn’t do anything to calm them down. I stopped knowing if what was happening was real or just a product of my imagination.

Eventually, a lawyer came to visit me. Her name was Lea Tsemel. She was an Israeli lawyer.(2) She came to meet me in the visiting room one day and she gave me cigarettes. She told me she was taking on my case. I was so confused. I just asked her if what was happening to me was real, or was I just trapped in my imagination. So many times I was convinced that the prison was full of snakes. I asked her about that, and she told me I was just hallucinating. She told me about my charges and let me know we’d be in court soon.

There was one police officer who was nice. One morning, I asked to go to the bathroom, and the interrogators wouldn’t let me go until midnight. When this one police officer saw me in pain because I had to go so badly, he said, “godammit! What happened to these people? Why do they torture people? Godammit!” he was angry, and he let me go to the bathroom. Then he brought me tea and cigarettes and said, “rest, rest.” This was very risky for him, and I really appreciated it.

The whole interrogation was two months. I was afraid that they were going to kill me and my friends, because we had heard all these terrible stories of torture. I had an uncle who had been arrested a while before, and I knew that he’d died in prison. He participated in a hunger strike, and when the prison guards force-fed him, he choked to death.

The main thing that consumed my thinking was that these people were crazy, and they wanted to torture me and mentally destroy me. And they would actually say it right to our faces. They would tell us, “We want to ruin you psychologically.” In fact, many prisoners do become mentally ill. some of them die. I didn’t go crazy. I focused on all the other people suffering besides me. And also, I think people who are really religious have a hard time with this kind of abuse sometimes. They pray to god for help, and when none comes, it breaks them mentally. But that wasn’t me, and I was able to focus on the future and what I needed to do to get myself out of that situation.

After two months of interrogation, my friends and I were taken to trial and charged with terrorist activities. The judge sentenced us to four to six years each. My mother was in the courtroom, and she fainted when she heard the sentence."

1. Al-Muskubiya (“the Russian compound”) is a large compound in Jerusalem that was built in the nineteenth century to house an influx of russian orthodox pilgrims into the city during the time of Ottoman rule. Today, the compound houses Israeli police headquarters, criminal courts, and a prison and interrogation center.

2. Lea Tsemel is a prominent human rights lawyer in Israel.

From Palestine Speaks: Narratives of Life Under Occupation

Israel-Palestine on Record
by Richard Falk and Howard Friel

The Idea of Israel
by Ilan Pappe

Israel and Palestine
by Avi Shlaim

Image and Reality of the Israel-Palestine Conflict
by Norman G. Finkelstein