In il manifesto, Luciana Castellina spoke on the publication of a collection of Lucio Magri’s parliamentary interventions. Magri as a thinker was, as Perry Anderson observed, 'incapable of a theoretical reflection that was not rooted in the real actions, or inactions, of the exploited and oppressed'. His involvement in Italian party politics therefore raises questions of the relationship between popular politics and the radical left. 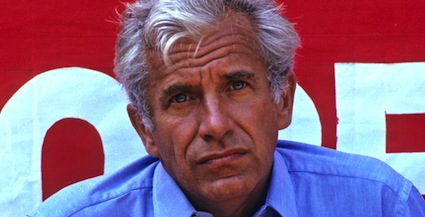 In the preface to these two volumes Stefano Rodotà writes that Lucio Magri was one of the protagonists of the late twentieth-century Italian parliament, what he calls a ‘fine period’. And I have to say, on reading these texts again I do feel a certain nostalgia: back then an intervention in the Chamber of Deputies meant commitment, reflection, and a really high level of intervention – not just for Lucio, but for everyone. And that also explains why anyone would want to publish these texts so many years later.

He was a leading figure, yes, but a rather anomalous one, since to begin with in the 1976–79 parliament he was part of a group that comprised just six MPs out of a total of 630. Indeed, he was the leader of a party, the PdUP (Party of Proletarian Unity) that had just three of these six MPs elected as part of the Democrazia Proletaria. Yet this represented the only opposition – as we said back then, when we still made the distinction – to the ‘democratic arc’. When he made his first parliamentary speech Lucio faced the paradoxical situation of voting no-confidence in a government that enjoyed almost total majority support: that is, Andreotti’s grand coalition government [i.e. because the PCI gave external support to an administration led by the Christian Democrats]. And I think this little fact also indicates the importance of parliamentary pluralism (which is a good thing to remember at a time we’re debating a new electoral system): a form of representation that truly expresses the whole spectrum of people in the country. That is no recipe for chaos; rather, it allows for unprecedented, stimulating connections to be made. I am here thinking above all of Magri’s dialogue with the current President of Italy – who I truly thank for being here with us – during the rather conflictual reformulation of the electoral system in 1993. It is great that we can read acts of parliament again, and it is a fine thing that the parliamentary library has taken the trouble to make this possible, with its publications. After all, it is the most authentic, direct testimony of a historical period. Indeed, I have to say that I, too – and I was also a parliamentarian between 1976 and 1999 – have found rereading these texts a great help in deepening my reflection on that period. And it was an epoch-shift for our country, one which some have not unreasonably called the ‘transition from the first Republic to the second’. But rather than going back to that period, I would rather draw attention to some of the things in Lucio Magri’s speeches that struck me as being still very current today. And I particularly want to focus on the question of the crisis of democracy, which seems to me to be the most troubling problem that we face today.

Lucio was aware of this threat even back then, warning – with what Rodotà defined ‘harsh realism’ – of the risks of the growth of ‘anti-politics’, which we can today see writ large. This was not an impotent complaint, but a concrete critique of the parties’ increasing introversion and their inability to listen to what was going on in society with the new movements. So he wasn’t doing what people too often now do, insisting on the need for some direct expression of a sacralised and indeterminate civil society – indeed, a crumbling one, fatally subordinate to the ruling culture. Rather, he stressed that we ought to devote ourselves to building what he called ‘organised democracy’. Not only parties closed in on themselves plus a delegated form of representation, but a network of associations that are able to go beyond mere protest, committing to learning how to take on the direct management of essential parts of society’s functioning. This could thus gradually reduce the distance between the governing and the governed (and as such provide the most solid possible base for democracy). And this in turn would bridge the massive divide between institutions and the citizenry.  Not by chance, the PdUP was a reference point for such networks in the 1970s, when they were particularly flourishing. I am thinking of the Factory Councils, the Neighbourhood Councils, movements like ‘Medicina Democratica’ and ‘Psichiatria Democratica’, or those concerned with the big questions of our urban and social fabric.

I wouldn’t blame the younger generations for their lack of interest in politics, for the arguments against the ‘caste’ that inevitably lead to indifference toward democracy itself, or a totally reductive image of it: that is, portraying as a set of individual rights, not the space in which we construct and make use of our collectivism. The terrain of politics has shrunk like Balzac’s magic shagreen – it has now become a passive exercise, limited to asking whether the citizen says yes or no to something proposed from on high. It’s at the level of deciding to put a ‘Like’ or not on Facebook. If democracy is only this kind of sporadic consultation, and not a space for deliberation that makes each of us a participant and a subject in constructing an ever-renewed society, than why on earth would any young person get excited about it? The decline of the mass parties of old has created a void, a lacuna; and since the days when Lucio was pointing out its symptoms, it has grown to the size of an ocean. We can’t rebuild these parties the same as they were before (and let’s not forget, they had no few defects). But it is important to get back to reflecting on the meaning of politics – which is not the search for consensus, but the construction of meaning. Just like what Magri is doing in these speeches. Though they were addressed to the Parliament and not to a classroom, what he was doing was pushing us to take back politics – which is the search for one’s own identity in relation to other human beings, and not each of us retreating into our own self-interest in the illusion that we can each save ourselves. If we don’t manage to grasp that a slowly achieved shared position (which is something very democratic indeed) is more valuable than rapidly made (and only apparently more effective) decisive action, then we will not even manage to revive a real Left. In that sense, like all the old PdUP comrades I am really happy about the cue these texts give for us to reflect on the situation that we face today. And to help us discuss it with the youngest. Magri’s far-sighted lucidity on this and other questions – which was definitely one of his most characteristic qualities – was particularly incisive because he was not a prophet or an intellectual in an ivory tower. When Magri died, Perry Anderson – an editor of the highly respected New Left Review – wrote that ‘Lucio Magri was a unique figure in the European Left— the only significant revolutionary thinker of his time whose thought was inseparable from the course of the mass movements of the decades through which he lived. He was incapable of a theoretical reflection that was not rooted in the real actions, or inactions, of the exploited and oppressed’. In the end, Lucio’s almost obsessive quest for the connection between theory and militant practice proved fatal. In 2004 he decided to put an end to the new ‘Rivista del Manifesto’ that had been re-established under his leadership in 1999. It was a fine magazine. But Lucio wasn’t willing to resign himself to the fact that the necessary social reference points were missing – he didn’t just want to be an intellectual who wrote without testing his ideas in political activity. And unable to see any immediate prospect of major interlocutors emerging – and given that the political debate of the time was descending to a trivial level – he decided to cease publication. Similar motivations led him to his tragic final decision to end his own life. ‘I am not saying that the Left will not be reborn’ – he insisted ‘ but that it will take many years, and I will be dead already. So it’s a debate that doesn’t concern me’. But he wasn’t pessimistic, when it came to the long term. We can see as much in the title of his book The Tailor of Ulm (which now has English, German, Spanish, Brazilian and Argentinian editions). The title is taken from a parable of Brecht’s. The tailor claims that man can fly, and sick and tired of arguing about it, the bishop-prince of Ulm ends up challenging him to throw himself off the church-tower: ‘then we’ll see if what you say is true’. The tailor climbs the tower and jumps off, and unsurprisingly crashed to his death. But who was right, the tailor or the bishop? The tailor: ultimately, man did fly. So, Lucio said, if for now communism is flattened on the ground, one day it will take flight. We’ll keep trying.

Books for Burning
by Antonio Negri

The Tailor of Ulm
by Lucio Magri