40% off EVERYTHING!
about 1 month left
Rosie Warren
comments

With the Scottish independence referendum a mere six days away, and the Guardian today deeming it “too close to call”, we’re returning to Tom Nairn’s The Break-Up of Britain. First published in 1977, Nairn contended that civic nationalism, rather than ethno-nationalism, would play an increasing role in the breakdown of the United Kingdom.

In the 2003 Australian new edition, he wrote

The Break-Up of Britain began its life in a still imposing, if narrowing river; by the time the 1981 paperback edition had appeared, the river had begun to feel the approaching rapids—which have accelerated for over twenty years, and attained a crazy pace even in the few weeks between beginning and finishing this new edition. The thunder of a waterfall no one conceived of in 1977 is in everyone’s ears, as Tony Blair sends off his ships and troops to assist America’s assault on the Middle East … In the altered world lying beyond these falls, it is surely unlikely the United Kingdom will survive in anything like its historical form.

Read an excerpt from Nairn’s chapter on ‘Old and New Scottish Nationalism’ below.

The emergence of modern Scotland was marked by constant social and radical agitation. This proceeded parallel with that in England but, as E. P. Thompson notes in the preface to The Making of the English Working Class, it was ‘significantly different’: ‘Calvinism was not the same thing as Methodism, although it is difficult to say which, in the 19th century, was worse … And the popular culture was very different.’ It also poses a significantly different question. This is of course why, under these quite different conditions, it did not result in agitation for separatism. In his discussion of England’s popular radicalism, Thompson shows how its more revolutionary tendencies were betrayed by lack of support from above: whatever their dissatisfaction with the ancien régime, the new bourgeoisie feared the forces beneath them too much to take this path. Not being compelled along it—because they had already achieved adequate economic emancipation as a class—they blocked it, in an ever-closer alliance with the older landed Establishment. One may say something similar about Scotland. But the important difference is that here they were also obstructing and diverting the separatist or nationalist trends which were still implicit in the persistence of such a distinct civil society.

It still may not be grasped quite what an anomaly this presents. People look back nowadays with puzzlement at the country’s 19th century lack of nationhood, its near-total absence from the great and varied stage of European nationalism. With resentment or relief (depending on their politics) they wonder: what was missing? In every superficial respect except one—language—Scotland was quite exceptionally well equipped for the usual nationalistic struggles. Unless one accepts a naïve language-theory of nationalism, therefore, it is necessary to look a lot deeper. On the surface, around 1820-30, only one other place looked more like a nation-to-be than Scotland: that other recently deceased State, the epitome and inspirer of so much of the romantic nationality struggle of the century, Poland. Nationalism involved the reanimation of one’s history. And there was nowhere else more—to coin a phrase, the needed contrary of ‘history-less people’—‘history-ful’ than the Scotland of Sir Walter Scott.

The cultural ‘raw material’ for nationalism—old traditions, folk heroes, anti-Englishry, etc., etc.—was not only abundant. One can observe it being fashioned in the usual way in (to take only the most obvious example) the radical Robert Burns. This was the Burns who ‘knelt at the tomb of Sir John the Graham, the gallant friend of the immortal Wallace’ and ‘said a fervent prayer for old Caledonia over the hole in a blue whinstone, where Robert de Bruce fixed his royal standard on the banks of Bannockburn…’ But this historical nostalgia was associated with his sympathy for the American and French Revolutions. ‘For Burns in 1793’—the year in which he composed Scots wha hae—‘Bannockburn is directly associated with the French Revolution’, notes Janet Adam Smith, in the sense that ‘Scotland’s fight for independence could be the channel of expression, the “objective correlative”, for feelings of independence that were not confined to Scotland … The swords and staves of Bruce’s army must become the carronades sent … by Burns to the French Convention’. This was exactly the sort of utilisation of historical materials which generally marked the formative, ascendant phases of nationalism in Europe. After Burns, hundreds of kindred spirits were to respond to the revolutionary impact with a similar new mythology, a similar vindication of their own special inheritance and its (real or supposed) universal meaning.

In Scotland however, this promising ‘raw material’, this newly rediscovered historical character, could not possibly be developed in the usual way. Here, such ethnic and historical differentiae could not be mobilised and made part of a new national, romantic culture. Scottish civil society had advanced too far, too quickly. The new bourgeois social classes inherited a socioeconomic position in history vastly more favourable than that of any other fringe or backward nationality. They were neither being ground down into industrial modernity, nor excluded from it. Hence they did not perceive it as alien, as a foreign threat or a withheld promise. Consequently they were not forced to turn to nationalism, to redress the situation. They reacted to the inexorable and revolutionary changes of the crucial period even more fiercely than their English partners—with a conservatism amplified, perhaps, by the uneasy sensation of how much more there was to repress and divert into Scotland.

Scots differentness could not be harnessed in the way that the young Burns and other radicals imagined. But it did not disappear, for that reason. It simply became a problem. This problem was a new one, specific to 19th and 20th century conditions; and I shall go on to argue that in certain respects it was culturally insoluble (and led therefore to a persistent alienation of the intelligentsia) although it was practically solved by the crude external instrument of imperialism. It was culturally insoluble, because the vital transitional period, from the 1790s to the 1830s, had ushered in a new age of more organic communities—of the modern societies in which, to employ Gramsci’s terms again, ruling classes had to ‘construct an organic passage from other classes into their own’, by means of a new, more effective ‘apparatus of political and cultural hegemony’. Scotland could not become an ‘organic’ national community in this sense, with its own distinctive union of civil society and State. But it could not remain in the 18th century either. The problem of its bourgeoisie therefore became—put in the starkest terms—one of neutralising and repressing the country’s more distinctive protonational features.

It was only after this that the model of Scottish development indicated above—heterogeneity as between society and State—poses dramatic questions. Earlier on, it is only by a sort of romantic retrospection that the Scottish ruling class and intelligentsia can be depicted as ‘betraying’ their particular ethno-national inheritance. If they spurned Scotticisms and ‘uncouth manners’, it was because, like similar classes from Norrland to Andalusia and from Flanders to Ruthenia, they believed in a Universal and Enlightened civilisation of which—sooner or later—everybody educated would be members. There was nothing reprehensible about being a ‘province’ in an expanding world like this. But the world did not continue to develop in the same way: it broke down into the separate, national, mass societies of the following century—creating quite new general conditions for culture. And under these conditions Scotland was (so to speak) ‘stranded’. It was in an off, limbo-like state, betwixt and between, where is has remained ever since. It was too much of a nation, had too different a civil society, to become a mere province of the UK; yet it could not develop into its own nation-state on this basis either, via nationalism. 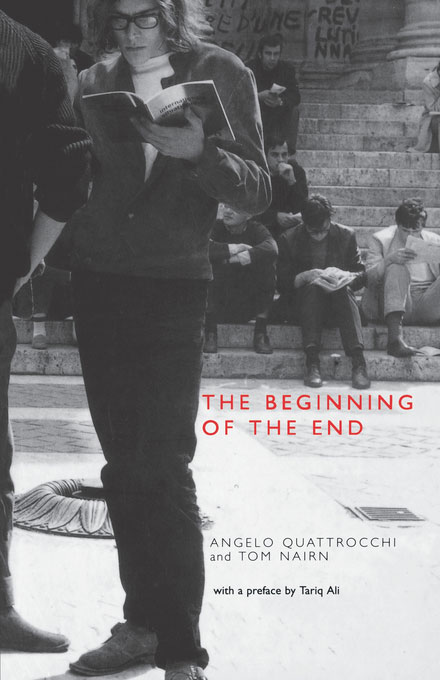 The Beginning of the End
by Tom Nairn and Angelo Quattrocchi

The Enchanted Glass
by Tom Nairn