Reading in a Time of Coronavirus: 80% off ALL ebooks and 40% off ALL print books
1 day left
Jordan Skinner
comments

Why is Gaza alone?: Luciana Castellina remarks on the need for active demonstrations 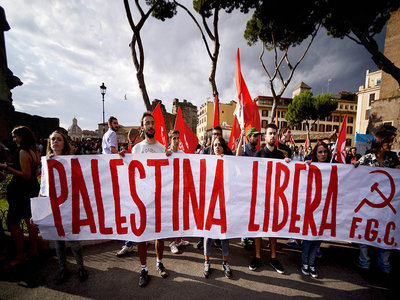 I do not want to talk about what is happening in Gaza. I do not want to write about it, because it is too painful for me to have to let out a cry of indignation for the umpteenth time. Because I do not want to reduce myself to hoping in good faith for dialogue between the two sides – an exercise to which so many lofty words are being devoted here in Italy. As if it were a matter of two little kids in a fight, who us civilised types had to school in good manners. Not to mention those people writing justifications for poor old Israel, so cruelly under attack by the terrorists (the Palestinians are never soldiers, but always and everywhere terrorists, while the Israelis are only ever soldiers, and never terrorists).

Yesterday I heard a programme on Radio Tre – which I had remembered as being better – in which the commentators were truly scandalous. A journalist (his surname was a Meucci or a Meotti, I cannot remember) reported the number of Palestinian victims: and then he protested that this tally was a dirty trick, lies from the anti-Israelis, all of whom had forgotten about the Holocaust. After all, he said, it is not true that civilians make up two-thirds of the dead – but one-third at most.

And then Foglio promoted a demonstration in solidarity with the real victims: the Israelis, that is.

You might not be in agreement with the political line of Hamas – and I am not – but whoever does criticise it must then explain why neither Netanyahu nor any of his predecessors made an agreement with the PLO (indeed, he has consistently responded with threats to any attempt at an accord between Hamas and Abu Mazen, in order to stop such a deal from happening). And yet, I ask myself: if I had been born in a Palestinian refugee camp, then what would I think, what would I do, after the almost seventy years of abuses and humiliations, human rights violations and disregard for UN decisions, after dozens of accords that collapsed under the advance of the settlements, and faced with the promise of Palestine being turned into – at most – a smattering of bantustans to which millions of people cannot return, people born there and torn from the homes in which their families had lived for centuries? I fear that I would have ended up a terrorist.

Not because this is the right thing to do or a likely successful one, but because the condition of the Palestinians is now so unbearable; because the historic injustice of which they are the victims is so blatantly unacceptable; because the justifications for Israel – which complains of being targeted, when it has done everything to provoke hatred – are so philistine; because the West (and now also the East) is so clearly hypocritical in readily sending bombers and drones and troops all over the world under the pretext of upholding the United Nations’ decisions, at the same time as never – I say never, not since 1948 – even sending so much as a man on a bicycle to force Israel to obey the countless UN resolutions that Israeli governments, whether left- or right-wing, so regularly make a mockery out of.

But that is not what I want to write about, I know that the readers of Il Manifesto do not need convincing. I picked up my pen only because of the need for a collective reflection on the reasons why so many protestors have taken to the streets of Paris and London – indeed, in greater numbers than had previously been seen – and yet in our country we have not gone beyond having a few rallies and little local demonstrations, except fortunately for Milan where there was a somewhat more major initiative.

What has happened in Italy, which was always in the forefront of protests surrounding this question, managing to mobilise hundreds of thousands of people? Perhaps this is precisely the cause of the problem – because this forced us to recognise that these marches, even arriving at the gates of Jerusalem itself (remember the ‘women in black?’) did not serve to push forward the peace process, to bring justice? Because of disillusionment and resignation? Because we, the strongest peace movement in Europe, did not manage to avert the now perennial wars, because our idea that pacts should be made with enemies rather than allies – because our goal must be not to conquer, but to understand each other – did not prevail? Or is it instead because in our country there is no longer any sufficiently expansive political force with the necessary authority to build an adequate mobilisation? Or because we have a government for which so many of the people who were by our side in the past demonstrations voted, a government that has however not proven capable of voicing one word – one single word – of criticism amidst these tragic circumstances? Because of the chilling silence from the young Renzi, the very man who tries to make us believe that he, unlike the old politicians, is a natural human being? Because he has proven lacking in emotion, in the capacity for indignation, in the little anger that would be necessary for him to let slip one single sentence, one impulse of feeling for the massacred children of Gaza, in his numerous (and ever-so captivating) online discussions with the public? Because he has not tried anything, or because he thinks that the fate of Italy and the world depend on the mute Federica Mogherini ascending to the role of EU foreign minister? And if she did – to do what?

This is what I want us to talk about. I have no answers. And not because I think that there is nothing left to do in Italy. I am not like the many people who are that pessimistic about our country. Rather, I get angry when I hear people abroad saying ‘Oh god, Italy is finished’, and then talk only about what the government is doing and do not notice that there is still a widespread politicisation in our country, a great dynamism in local initiatives, associationism and volunteering.

In recent days I was in Otranto at the ‘Rete della conoscenza’ camp (run by left-wing students and academics). So many fine young people, who rather than tanning themselves on the beach committed their whole day to working groups addressing the problems of education. Yet they were in no sense corporatist: they were concerned with the problems affecting humanity. Of course, they lack the general political reference points and the legacy of analyses and projects on and for the world that my generation had, and as such inevitably fall victim to fragmentation.

Then I participated in the ARCI’s beautiful Villa Literno commemoration of the 25th anniversary of the death of Jerry Maslo, the young South African and slave to the tomato fields, who at the time of his 1989 murder had been gradually developing a constant initiative, you might say a kind of substitute for what institutions should have been doing: building solidarity with the most exploited in the villages, and a dedicated volunteering effort to give the necessary human social and political support to the black youth coming from Sub-Saharan Africa and the Maghreb and then from the East.

I mention these two things because I saw them with my own eyes in the last few days, but I could add so many other experiences, and I would certainly count among them what the Tsipras list has built, stabilising an unprecedented political activism across Italy by way of the electoral committees, which did not fold after the European elections. And so why do we not devote ourselves to everything that we have the capacity to influence, to make count? Of course, we know many of the answers: the growing irrelevance of politics, the decline of parties, etc. etc. I did not write this because I have prepared easy recipes, nor because I know very many responses. I write only to share the frustration of impotence, to avoid getting used to resignation, so that we might help each other to ‘keep searching’.

Translated from Italian by David Broder. Read the original here.

Read all about the conflict in our Explaining the Israel-Palestine Conflict post.