Verso at the 2014 Left Forum: Panels and a Launch Party! 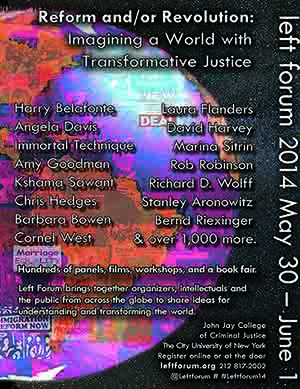 Verso Books is proud to represent once again at this year's Left Forum. The conference, which will take place May 30-June 1, will bring together some of the most important contemporary leftist activists and scholars.

To ring in the weekend, catch two Verso authors at the Friday evening plenary: Marina Sitrin, author of They Can't Represent Us!: Reinventing Democracy from Greece to Occupy, and Stanley Aronowitz, author of the forthcoming Death and Life of American Labor: Toward a New Workers' Movement, who will join Cornel West and Immortal Technique to consider "Why Revolution Now? What Revolution Now?" The discussion will be moderated by Amy Goodman.

Help Sitrin and her co-author Dario Azzellini celebrate the release of They Can't Represent Us! at their launch party on Saturday, May 31 at 3:20 in Room 1.105. Based on extensive interviews with movement participants in Greece, Spain, Venezuela, Argentina, across the United States, and elsewhere, this book is an expansive portrait of the assemblies, direct democracy forums, and organizational forms championed by new social movements, which put forward the idea that liberal democracy is not democratic, nor was it ever.

Other highlights: Melissa Gira Grant, author of Playing the Whore: The Work of Sex Work, will speak on a panel about work in the digital economy. David Harvey can be seen in two sessions, one on the state of the radical political imagination and one that reflects on the history of the Socialist Register (the panel is moderated by The Making of Global Capitalism author Leo Panitch, and includes Jacobin editor Bhaskar Sunkara). The topic of the US military's ongoing targeted killing will be discussed by Medea Benjamin, author of the incisive Drone Warfare: Killing by Remote Control. Vivek Chibber, whose Poscolonial Theory and the Specter of Capital made waves in subaltern studies, will consider 21st century socialist strategy. Benjamin Kunkel, who wrote Utopia or Bust:A Guide to the Present Crisis, will explore the question of class in the 21st century.

Finally, entire panels will be devoted to two of our exciting recent releases in social theory: The Complete Works of Rosa Luxemburg, Volume 1 and Althusser's On the Reproduction of Capitalism: Ideology and Ideological State Apparatuses.

For a full schedule of Verso authors at the Forum, visit our events page.

The Making of Global Capitalism
by Sam Gindin and Leo Panitch

Utopia or Bust
by Benjamin Kunkel

On the Reproduction of Capitalism
by Louis Althusser

A Companion to Marx's Capital, Volume 2
by David Harvey

They Can't Represent Us!
by Dario Azzellini and Marina Sitrin

Postcolonial Theory and the Specter of Capital
by Vivek Chibber