Today, January 27th, is Holocaust Memorial Day in the UK, chosen to mark the day in 1945 when the fascist death camp Auschwitz was liberated by the Soviet Union. In 1939 Felix Weinberg, a twelve-year-old Jewish boy from the Sudeten, was captured by the Nazis, and spent almost his entire teenage years in the concentration camps, before being forced on the infamous Blechhammer Death March of 1945. What follows are edited extract from Felix's moving memoir Boy 30529, where he recounts his time in Auschwitz and the cruelty of the march from Blechhammer. Despite losing his teenager years to the camps, Felix went on to become Emeritus Professor of Combustion Physics and Distinguished Research Fellow at Imperial College London. He passed away in December 2012. 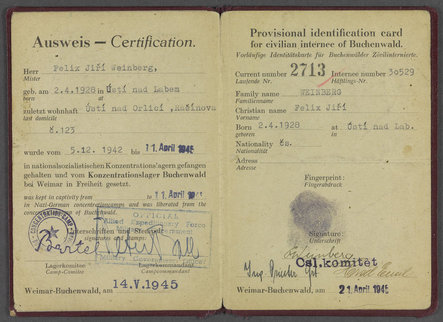 The train took us to Pardubice, some fifty kilometres east of Ústí nad Orlicí. Pardubice is the district capital and has several halls with enough floor space to sleep large numbers. I must admit I was actually quite excited about the adventure, after many months of boredom. I hadn't spoken to another teenager since I left school. My next recollection is of finding myself in bed in a children's ward of a hospital, where we had our heads shaved. I did not think that improved my appearance, vanity having reasserted itself by then, so I improvised a turban, which I decorated with my mother's polar bear-shaped silver brooch. Under Terezín's crowded conditions, serial epidemics spread rapidly. During my time there, many children contracted scarlet fever and later polio. In the bed next to mine was a tiny child whose breathing sounded like the crumpling of a paper bag. He died of pneumonia a few days after my admission. Up to that time I had only ever seen one corpse; as a small boy I once caught a glimpse of the bloated body of a man who drowned in the Vltava and had been dragged out onto the towpath. The sight affected me profoundly and from then on I tried never to kill any living creature, if I could avoid it. Never again did I incinerate ants with a magnifying glass.

After almost a year in Terezín, our time was up and we were escorted to the cattle trucks of the train to Auschwitz. It was pitch black inside the truck – mid December and no windows. I think there were too many of us for all to sit down. How do people behave when squashed into railway cattle trucks en route to Auschwitz? If they wailed and moaned, I did not hear, and I suppose their immediate neighbours would have turned on them. I called out to my mother and brother – we got separated by the soldiers who were herding us – and to my great relief I discovered they were sitting in the same truck, some distance away.

I became familiar with that assembly line system during my subsequent grand tour of Nazi concentration camps. The reception establishment was euphemistically (or perhaps ironically) called the 'sauna'. All possessions, clothes and shoes had to be dumped in the first room. One then proceeded to the shower room, which involved delousing, disinfecting, head shaving and, where appropriate for first-time arrivals, tattooing. In the last room one was issued with striped prison 'pyjamas' and footwear.

As the war progressed, the pyjamas became increasingly thinner, scratchier and the material more straw-like. The boots were made of canvas nailed to wooden soles. With luck, the outfit would not be completely the wrong size.

In the extermination camps there were similar establishments in which the showers dispensed not water but gas and there was no clothing in the last room. (This, clearly, is not recounted from personal experience, except for the knowledge that the victims were led to believe that they were going to the showers.)

There is probably no need to describe the layout of the Auschwitz-Birkenau camps. There can be few people in the world who have not seen the grim photographs of the adjacent narrow strips, each with a single street with long black wooden huts facing it at right angles, each strip enclosed by high voltage barbed wire fences and guard towers with searchlights and guns. What is not evident from photographs is the smell of mud mixed with calcium hypochlorite, particularly at the far end where the latrine and washroom (and, as it so happens, my barrack) were situated. Calcium hypochlorite is bleaching powder and its unique and penetrating stench will forever be associated in my subconscious with that place. The Nazis were terrified of epidemics and, clearly unconvinced that Aryan DNA would be respected as distinct by pathogens, prescribed piling on the cheap disinfectant.

I had no idea of the true nature of our new camp until we were given a night-marish tutorial by the men from previous transports who already occupied much of the block to which I was assigned – having been allocated my place in a four-storey bunk.

That was, in fact, the first time I learned about the existence of the gas chambers and the significance of seeing smoke from the chimney of the adjacent crematorium.

My attitude to those SS thugs became a mixture of fear, contempt and revulsion. I could not really hate or judge them because they were not human by my standards. I dared not look our guards in the face in case they saw the contempt in my eyes – they could beat or kill us on a whim, so there was little point in provocation. At some level I suppose it had dawned even on the most thuggish among them that those emaciated shuffling Muselmen over whom they had dominion included the former intellectual elite of Europe. Perhaps that enhanced their job satisfaction.

In spite of my exhaustion on the day of arrival, I did not expect to sleep after this introduction to my new way of life. Nonetheless, I must have slept some of the night since I did not hear Kurt, my poetic friend and Hegel devotee, hang himself. He was in the same bunk and was hanging by his belt from its corner post when I was woken early in the morning for the roll call. My shock and sorrow was tinged by profound respect; I would not have expected such resolve from my bookish, philosophical friend.

We – the first group of Czech teenagers, newly arrived from Auschwitz-Birkenau – were assigned to the construction and maintenance of the works' rail-tracks. Our instructors and supervisors were two young Polish civilians, presumably employees of the railway company. For all their huffing and puffing they were decent people, to which the following story bears witness. Their German overseer was an avid hunter and the Silesian forests all around offered plenty of game. Marksmanship was evidently not his strongest suit because, some weeks after our arrival on the scene, he managed to shoot and kill his own hunting dog – a large Alsatian. In an uncharacteristically generous act, the officer donated the canine carcass to our Polish supervisors, who cooked a splendid meal from its mortal remains. (They were also short of food, of course; protein in particular.) We did not get any of the meat – that would have been too much to hope for – but we got some of the soup. I have never forgotten either that act of kindness or the delicious taste of the soup. I dare say that not many people have tasted Alsatian soup, but it was the best meal I had that year.

All the members of our teenage gang suffered from extreme sleep deprivation. As a physical craving, it came only just second to hunger. I had no watch, of course, or sight of a clock to refer to, but I doubt we ever got more than four hours' sleep. Our days started before dawn with the early-morning roll call. This required us to stand to attention in rows and columns of multiples of ten to be counted. The only valid excuse for not attending was having died during the night; any other dereliction would lead to grotesque punishments. We were often kept standing for hours when the task was assigned to an officer who would find even counting out loud so taxing that he would repeatedly lose track and have to start again. The SS officers who had problems counting on their fingers, spoke atrocious, strongly accented German; they may have been Polish Volksdeutsche volunteers. During the long days of the summer we would sway with tiredness during repeated miscounts but when winter came, and we had to stand for hours in the freezing cold in our thin prison pyjamas, we suffered from serious hypothermia – to the very point of passing out. The procedure was repeated after our return in the evening. ('To stand up and be counted' has sinister implications for me to this day.)

Once again I had no concept of where I was or where we were heading until I searched through the documentation now avail- able on the web, sixty-four years down the line. It transpires, we walked via Kole – Neustadt – Glucholazy – Neisse – Otmuchow – Zabkowice Slaskie – Schweidnitz – Strzegom until we, the survivors, reached Gross-Rosen concentration camp, twelve days later. Many gave up and fell by the wayside, knowing that would end their lives. Everybody has a breaking point when, no matter how strong the spirit, the body and brain give up. Thanks to my youth and history, I had not quite reached that stage, but was not far off. I learned later that some 800 of us died or were killed en route. The bodies were piled high on horse-drawn farm carts which brought up the rear. We walked through forests, along roads, across fields, all covered in snow.

Our progress was called a march but, truly, it was more of a trudge, a shuffle, a limp. At night we were locked in farm outbuildings, barns and sheds. On one occasion I bedded down on what looked like a comfortable pile of white powder, only to wake shortly afterwards to a burning sensation along my back; I must have chosen a heap of some chemical fertilizer for my bed. More often it was straw.

When we slept on deep straw, some people tried to hide by burrowing deep into it before the next morning's departure. When the guards came to collect us, they fixed bayonets to their guns and pierced the straw in many places. I would never take such a risk, chiefly because, if truth be told, I have always been more concerned about the manner than the time of my death. Ideally, I would like to meditate on all the wonderful experiences of my life, fall asleep, and not wake up. Freezing to death often seemed an attractive option because, once one became habituated to the agony of the biting cold, forcing oneself to stay alive felt rather like fighting fatigue and an overpowering desire to lie down and go to sleep. During the total exhaustion and cold of the march, the soft white snow looked most inviting. Being stabbed with a bayonet, on the other hand, would be the extreme antithesis of what I had in mind for my passing....

When we arrived, on 10 February 1945, I was one of the few who were able to dismount from the truck unaided. There were many frozen corpses. I do not know how many died; I did not stop to count. I must have been on autopilot, not even realising that I was within an hour of total collapse. If I was half dead in Gross-Rosen, it must have been more like three quarters now. It is difficult to explain the feeling to someone who has not experienced it, but one's perception is dimmed, one is on automatic, there is a feeling of impending total oblivion.
Tagged
Excerpts