“All that was once directly lived…” redwashing, the Olympic opening ceremony and hot patriotic tears

“The end of the history of culture manifests itself in two opposing forms: the project of culture’s self-transcendence within total history, and its preservation as a dead object for spectacular contemplation. The first tendency has linked its fate to social critique, the second to the defense of class power.” - Guy Debord, The Society of the Spectacle

There was much to analyse in the Olympics opening ceremony, and many questions raised (the most obvious being ‘has someone spiked my drink?’). But the element that has drawn most debate has been the celebration of the NHS – a bizarre sequence of dancing nurses, children’s nightmares and a looming Lord Voldemort seen off by a squadron of Mary Poppinses.

It was instantly hailed by many on the left as a grand subversive gesture, one in the eye for Cameron and Boris and the rest, and a call to arms to defend the NHS. 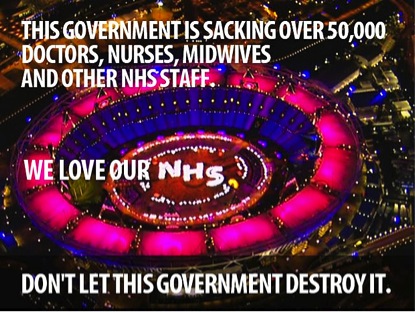 At Lenin’s Tomb, Richard Seymour poured scorn on the spectacle as a rallying cry against the cuts:

Amid the general Sunday morning hangover, I hope those on the soft left who threw aside their probity for a saturnalian flag-fest are now in the mood to confess and repent. Lawks, Mary Poppins saving the NHS from Voldemort to the tune of Branson's money-spinner Tubular Bells! Let the Tories dare privatise the NHS now! (They're already doing it. They'll still be doing it on Monday. The fine nurses and doctors from Great Ormond Street Hospital danced in vain if this was supposed obstruct this determined class assault.).

But how genuinely subversive was the ceremony anyway? It may have had the Daily Mail and right-wing MPs and pundits frothing, but its content was obviously LOCOG-approved,  and while Tory MP Aidan Burley called it “leftist crap”, it also had Boris Johnson crying “hot tears of patriotic pride”. Even the Nazi-impersonating MP Burley had to qualify his comments with “we all love the NHS”.

And, as John Doran of The Quietus put it,

Without some kind of context or rock solid agenda, at best the show was just a supremely entertaining spectacle and at worst it was actually threatening to make people feel as if they had contributed to a form of protest when, in fact, they had done nothing…. Bish bash bosh. Pure socialism mate. Two fingers up to the Tories and still time for Family Guy before bed.

But his proposals, while admirable, seem depressingly inadequate. Writing to MPs, going on demos (and candlelit vigils), and even more direct action such boycotting private health contractors seem too little, too late. (And, in fact, unless highly organised the latter would, if anything, help them compete with public providers). Much more is needed if we are to resist the Tories’ assault on the UK.

Others are more pessimistic still. On the LRB blog, Jenny Diski writes:

It was a wishful tale of things long gone. It was love as sentiment, a nostalgic cry for what has been lost. And it is lost. There is no party of the left with a different attitude towards the economy, privatisation and cuts in benefits and the NHS.

Is the NHS lost? Is defending the NHS a radical gesture acceptable to the mainstream because of its utter futility, because the threat has been neutralized and the fight long lost? Is it the equivalent of a Che Guevera t shirt, or a poster of a native American with inspirational quote? This is probably too defeatist. But when all we can suggest is to signing a petition, or “boycotting private health providers”, it’s hard not to feel the game is up.

Over the pond, Dave Zirin at the Nation blog explained why to US viewers the ceremony still appeared deeply subversive :

[Despite this,] the ceremony should be seen as a colossal sham. There is the awkward fact that Boyle chose to tell the story of the United Kingdom without any mention of its history of empire, conquest and barbarism…But even if Boyle had only proceeded with script approval from Billy Bragg and ended the proceedings with giant puppets calling a general strike organized by John Cleese, it failed. It failed because all of this celebration of working-class sacrifice, multiculturalism and the glories of national healthcare was done at the service of an Olympics that deliver the harassment of black and brown Londoners, ballooning deficits, austerity and cuts to the very programs like the NHS that Boyle was choosing to celebrate. This helps explain why the people orchestrating those cuts and the intense police surveillance, like Prime Minister David Cameron, lavished praise on the opening ceremony. London’s conservative mayor Boris Johnson also called the Tory critiques of Boyle’s story “nonsense”, saying, “I’m a Conservative and I had hot tears of patriotic pride from the beginning.”

This is the Olympics as nothing less than a neoliberal Trojan horse. Seeing the queen sit in observance of pantomime protests and Cameron cheer the very NHS he aims to slash is actually quite perverse. It’s like watching people in Washington, DC, cheer a football team called the Redskins: dancing on the remains of what was once proud but has been ruthlessly conquered. That’s not a “celebration” of a culture. That’s a minstrel show.

Indeed, as Lindsey German reported, while the audience and the leaders of the country cheered the suffragettes, and as

civil liberties campaigner Shami Chakrabati helped carry the Olympic flag in the closing minutes of the Olympics opening ceremony, police were laying into demonstrating cyclists just a short walk from the Stratford stadium. The Critical Mass protest over the elite games lanes, to be used mainly by VIPs as they move effortlessly between Park Lane hotels and the games venues, was attacked by police, and a number arrested. They were held on a bus without food or drink all night waiting to be processed. We can expect similar heavy policing for any dissent during the games.

In addition to the arrests, exclusion orders remain in place, drones and helicopters patrol overhead, missiles point at the skies above the stadium, almost twice as many soldiers are deployed in East London as in Afghanistan (here to guard the gateways to the ‘Olympic green zone’ and presumably stand vigilant against the everpresent threat of non-sponsor logo t-shirts or trainers) and “branding police” jump on any local business who dares to try and take a slice of the cash that was supposed to be flooding in to London.

The ceremony was a type of “redwashing” – celebrating ‘our nation’s proud history of protest and dissent’, while outside, peaceful protesters were being herded onto buses.  Some saw it as a type of  détournement - Danny Boyle subverting the huge government-approved spectacle to make a stand about NHS cuts. But is it not all part of the spectacle – an approved, sanitised history incorporating protest and resistance (within clearly defined boundaries)?

Even more depressing is the idea that perhaps this spectacle of dissent is acceptable only because it is no challenge to the established order. And, further,  that this recuperation, this inclusion of a stylised and neutralised radicalism does not just subsume the radical but strengthens the order itself by making it appear to tolerate dissent?

The spectacle appropriates all history, all culture. If all this ‘radical’ imagery is to galvanise us to sign a petition, or hold a candlelit vigil, what hope is there to reclaim our NHS, let alone our history, our present?

Comments on the Society of the Spectacle
by Guy Debord

A People's History of London
by Lindsey German and John Rees